﻿ Menlo Park almost lost its beloved Cafe Borrone to the shutdown. Then the community stepped in to save it. | Peninsula Foodist | Elena Kadvany | Mountain View Online |

Menlo Park almost lost its beloved Cafe Borrone to the shutdown. Then the community stepped in to save it.

Uploaded: May 18, 2020
The coronavirus shutdown nearly claimed one of the Peninsula's most beloved eating establishments, Cafe Borrone in Menlo Park.

After temporarily shuttering the longtime cafe in March, Marina Borrone, whose parents opened the first Cafe Borrone in Redwood City in 1979, worked every angle she could for relief. She called her credit card and insurance companies; she applied for a federal Paycheck Protection Program (PPP) loan (and didn't receive one), knowing that any loan would be putting a Band-Aid on a deeper wound.

Several weeks into the closure, the business had lost $150,000. She called her siblings and her parents and told them: "'I'm losing the cafe.'"

"I just thought, this is happening," said Borrone, who took over the family business as a 22-year-old college graduate. "We're going to be one of those places." 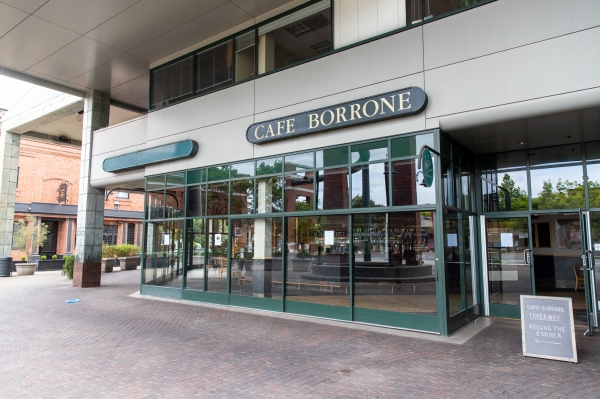 Menlo Park's Cafe Borrone reopened for takeout in late April thanks to community donations through a GoFundMe campaign. Photo by Magali Gauthier.

But then she remembered when the community rallied to save the adjacent Kepler's Books from closure in 2005. Reluctantly, and after much thought, she decided to ask her customers for financial support and launched a GoFundMe campaign.

"As a family we've weathered plenty of setbacks, but this one is unprecedented. With no way to generate income for an extended period of time, our cash reserve has dwindled to next to nothing," she wrote on the campaign description. "I am humbled to say that I need your help."

Donations poured into the GoFundMe campaign, which quickly raised more than $100,000. To date, nearly 900 people — residents old and young, former customers who no longer live in the area, former employees — have given $130,000, many leaving emotional comments and memories about the cafe.

Because of their donations, Cafe Borrone has managed to stay afloat. Borrone was able to pay off some of the cafe's bills and reopen for takeout in late April. For the first time in its 41-year history, Cafe Borrone started offering delivery last week. About 20 out of 70 total staff members are back at work, albeit not at their full hours.

Cafe Borrone's dining room and iconic patio, usually packed and buzzing with tables of people, children and dogs, are eerily empty. Borrone set up the takeout operation on the other side of the cafe, where Borrone MarketBar once was, planning to continue takeout even when in-person dining is allowed to resume. (She does plan to open up the cafe side soon to serve to-go espresso drinks, pastries and a limited menu.)

Despite the fact that takeout isn't profitable right now — the labor costs exceed sales so far — Cafe Borrone will likely remain a takeout-only operation for an extended period of time, Borrone said. Even when she and other local restaurants get the green light from San Mateo County to reopen with restrictions (which could be stricter than the state's), she's wary of what that would actually mean on the ground at the usually bustling cafe.

She's considered setting up a limited number of tables only outside and using paper plates. The kitchen is small, so with social distancing requirements for staff it would mean a smaller menu than customers are used to. She'd have to have someone stationed at the door to manage occupancy. It was hard for her to picture employees wearing masks and gloves constantly cleaning the outdoor tables and chairs. Will customers want to return to that kind of a setting? What if there's a second wave of the coronavirus, and the cafe has to close again?

"It's not impossible," she said of reopening for in-person dining. "My energy is better spent on all the other pieces rather than cleaning tables and chairs and making tables available in what is still a very fragile time."

I asked Borrone if she can picture the day when Cafe Borrone is again full of crowds of people meeting over sandwiches and Belgian waffles and frosted mochas or listening to live music on Friday nights. A self-described optimist, she said she can — but she's not letting herself think about that day yet.

"I miss my chaotic restaurant. I miss it so much. But that's not where we're at," she said. "I'm just in the moment. I hope that day comes and i know what that day feels like but I'm more just trying to get through this right now."


Wonderful! My wife and I loved the Redwood City original, and have similar feelings about the Menlo Park Cafe Boronne.


Glad to hear they are able to stay in business and keep paying their employees. Really to bad the Federal PPP program is such a scam; seems like a lot of really questionable companies are getting our tax money.


This has been an overwhelming time for many restaurants. Cafe Borrone is idealy set up for success in so many ways. They have that gorgeous outdoor space that they could have converted into an outdoor pantry for fresh food, breads and staples, much like the Milk Pail in Mt. View has done. They could have provided coffee and breakfast items by pre-order or socially distanced pick-up, much like Izzy's Bagels in Palo Alto. They could have provided musical joy with a single musician roped off to the side of the plaza.

The kitchen may be small but the restaurant space can be converted into work stations to allow for employee social distancing prep work and packaging to-go orders.

Necessity is the mother of invention and Borrone is perfectly poised to prosper in this environment. They also have the benefit of outdoor dining space which makes them ideally suited to open back up before restaurants who have only indoor seating.The opportunities are endless and Borrone is priceless!


Paly Girl, you are terrific. You offer great, creative ideas for a a restaurant (if indeed that is what it is) that is out of the ordinary, and is an ideal facility for exploring alternative ways such as you suggest to keep its centrality and powers of attraction alive.

We are entering the summer season. Outdoor six foot spacing is easier than indoors. Yes, there are lots of ways of reconfiguring "the back" of a restaurant by incorporating space from "the front." Even the tables outdoors can be spread further apart toward the back and further toward the sidewalk. Think cafes in Paris, Venice, Rome.

I share everyone's wishes for keeping Borrone open for business. In many ways, it's the heart of Menlo Park.

Report Objectionable Content
+   4 people like this
Posted by Mark Weiss, a resident of Downtown North,
on May 19, 2020 at 5:41 pm
Mark Weiss is a registered user.


Interesting article. I hope to resume grabbing the occassional meal or snack at Borrone someday.
Questions:
1) how are the 70 employees faring? Especially the 50 of 70 not recalled.
2) Would the landlord take a reduction?
3) how do you contextualize the $150,000 in losses compared to a normal monthly pro forma?

As a taxpayer and community member, I would support government bailout to help Marina Borrone and her family business weather this storm, but I'm less interested in helping the landlord.

How does this scenario compare to that of Dan Gordon, described in these same pages?

See also: Frank Capra's "It's a Wonderful Life"
Palo Alto used to have some community banks but I think they were bought out.

If I were on a desert island, I'd supposedly survive three weeks with no food only water because I am overweight.
Maybe Covid-19 is Gott's way of telling us to tax capital.

Are GoFundMe gifts comparable to microloans? Do the funders end up with tiny pieces of equity?

PS -- And sorry for the non sequitor -- I read recently that Jack Withers the founder of Kirk's hamburger as a chain had passed -- it makes me want to go eat a burger in his name. (see the reference to being overweight: too often rationalizing a treat -- Withers was the one who added french fries to the menu over objections of his previous owner.

Bottom line: no pun intended: kudos to kind souls supporting a local treasure like Cafe Borrone and I will try to get back there and lift a to go latte in your honor.

PPS: if i were on a dessert island, I'd eat the Big Rock Candy Mountain...with Pie in th sky on the sly.


@Mark Weiss, I'll tell you what every other landlord has offered, including mine. A rent reduction for two months to be paid back in full by the end of the year, as if that is some sort of generosity in a 0% interest world, and I'm somehow going to be all better merely by opening my doors. I couldn't have afforded the extra rent before the pandemic, I'm certainly not going to be able to afford it later this year. Thank goodness my lease is almost up. My business is off 66% and is unlikely to return even to breakeven in the next few years.


IIRC, the developer of the office buildings got permission to build at the scale we see (I believe it exceeded allowable footprint or square footage) by claiming (and getting credit for) the outdoor plaza as a "community amenity". But for decades the ridiculous rents they charge are enhanced by being next to the "public amenity" that is the plaza. So they got to build bigger, and likely enhance their rents and occupancy by proximity to the "public" plaza. Commercial property interests accrue the benefits even when they provide a supposedly "public amenity". Good grief, rent abatement is surely in order for Cafe Borrone, but how likely is that to happen?


Unless the building owner offers Barrone a real rent reduction, and not a radiculous loan, which Barrone may not be able to pay back given that social distancing will be in place for many months to come, and unless Barrone is allowed to extend outdoor seating out across the plaza, which will accommodate more people, I don't see how they will survive.

And while the elbow-to-elbow seating, coupled with the very long lines for ordering can be challenging, there is nothing else in Menlo Park to replace Barrone.

The potential loss of Barrone might also impact Kepler's. How many cafe diners also go to the bookstore? Always seemed like a nice synergy between the two establishments.

I wish the Barrone family luck. And Kepler's, because without both, Menlo Park will be that much poorer in culture.


Looking forward to splurging at Kepler's followed by lunch at Cafe Barrone when we move back! - Tom (Displaced Californian)


Café Borrone survives thanks to the local community. It is great next to the bookstore.

Report Objectionable Content
+   3 people like this
Posted by Blanche DuBois, a resident of Barron Park,
on Jun 7, 2020 at 4:04 pm


When the time comes when CV19 has burnt itself out, I think it would be great if the two local County Health Directors, Drs. Sara Cody and Scott Morrow, had a personal reckoning and apologized for the lengthy and unnecessary draconian measures they heaped on the local small business community.