The longtime dive bar reopened on Monday after a monthslong pandemic-forced closure with Johnson leading the kitchen. Taqueria Azteca, which for three decades had served Nut House patrons, closed permanently earlier this month due to the coronavirus. 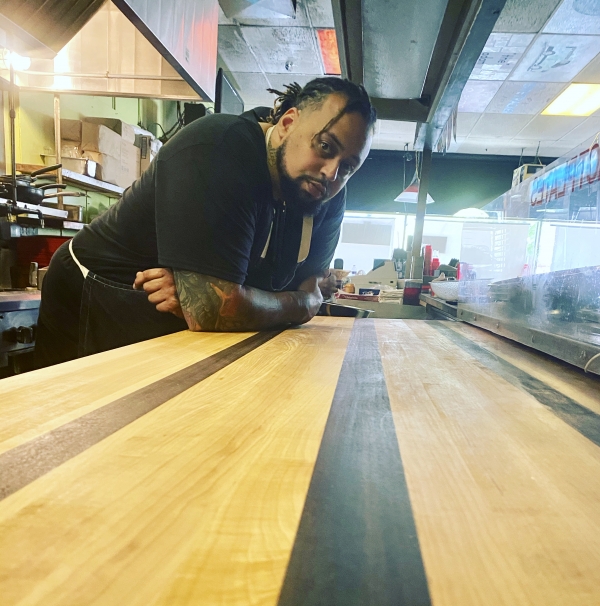 Johnson, a self-taught chef, is now serving chicken wings, lumpia, tacos, burgers and other bar fare out of the Nut House at 321 California Ave. Socially distanced tables have been set up in the parking lot adjacent to the bar for outdoor dining, and bright-yellow peanuts have been spray-painted in front of the entrance to remind people to stand 6 feet apart while in line. (Alcohol can only be served with food under local public health mandates, so people must first order food before getting a drink.)

The menu reflects Johnson's roots in Palo Alto. There's handmade meat- and vegetable-filled lumpia because one of his best friends growing up was Filipino. He named his burger, which comes with pickles and remoulade he makes himself, after Michael Meyer, a local woodworker whose son he went to Ohlone Elementary School with.

Johnson, a Gunn High School graduate, got the gig at the Nut House through another hometown friend: Palo Alto native Lars Smith, co-owner of State of Mind Public House & Pizzeria in Los Altos. Smith was in talks with the Nut House owners to take over the kitchen but realized he didn't have the time or staff to make it happen, he said, so he suggested they tap Johnson instead. Smith also grew up in the Ventura neighborhood and has known Johnson since he was about 5 years old. Johnson helped Smith open State of Mind in 2018.

Smith said they're talking about teaming up for future burger or pizza pop-ups at the Nut House.

Johnson always loved cooking; as a teenager, he'd barbecue for his friends. His first restaurant job was as a line cook at The Fish Market in Palo Alto.

He went on to cook at the now-closed Calafia Market in Palo Alto, the Palo Alto Elks Lodge, Sushi 88 in Mountain View, Mandarin Roots in Palo Alto and Alexander's Steakhouse in Palo Alto. Before the pandemic, he was a kitchen manager at Facebook. 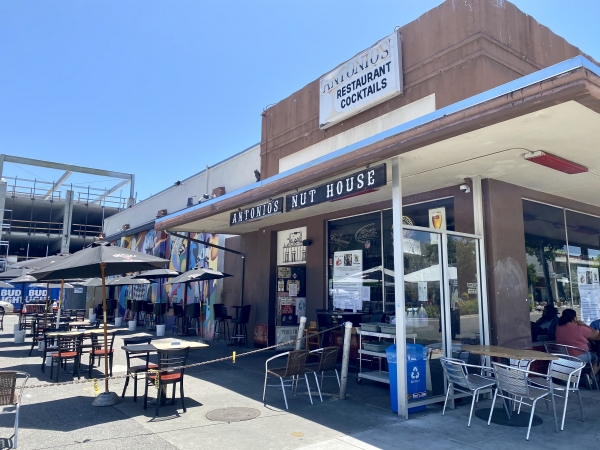 During the shutdown, Johnson had been serving tacos, Japanese curry, barbecue and other dishes out of his mother's house in Palo Alto through his catering company, Bay La Soul. He describes his cooking style as "soul food," not in terms of Southern-style cuisine but rather cooking with soul.

"I believe everybody has their own soul food," he said.

Also on the menu are quesadilla tacos — two tortillas with a layer of melted cheese in between — and regular carne asada, chicken or black bean tacos. He plans to expand the menu as he settles in.

Johnson said his dream is to have his own restaurant, so the Nut House was an unexpected but welcome opportunity.

"It's kind of weird it took a pandemic but I'm completely ecstatic about it and I'm grateful for the opportunity," he said.

Bay La Soul is open at the Nut House daily from noon to 9 p.m. The kitchen closes at 8 p.m. but will serve items like chips and salsa for the last hour.

The owners of the Nut House are still looking for a permanent home for the dive bar before the lease expires in December, including potentially a space down the street on California Avenue.

Below is the Bay La Soul menu: 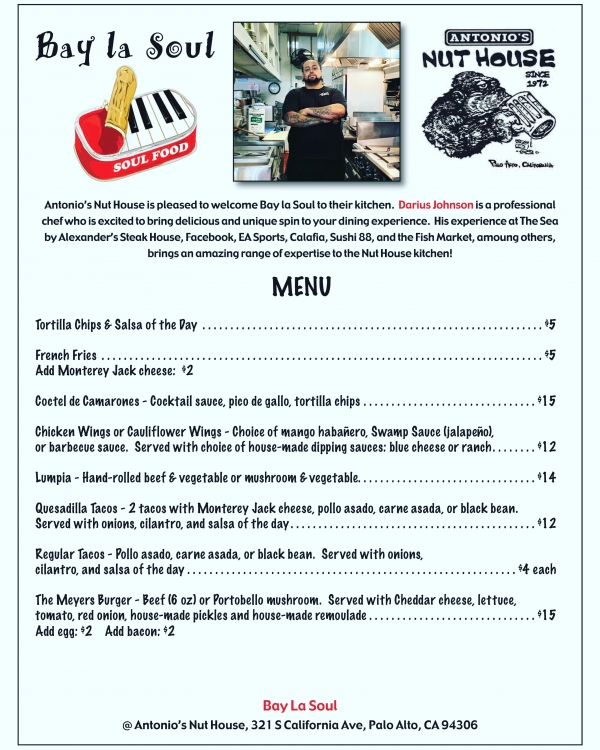 
I am over the moon proud of my son, Darius Johnson, for making this exciting move! Cooking has been his passion since he first discovered the spice cabinet when he was a little boy!! We've been having fun serving delicious meals from home during this pandemic and now even more people will have the opportunity to taste his creations!! Congratulations Darius!! I love you!!??


Your TEXAS family is proud of you cuz!!!!


This makes me very happy.

And as a Mama, I love the comment from Kristen above ??

Hooray for all of this! Good news


My family and I have had two of Chef Darius' meals already, and his food is DELICIOUS! Highly recommend the quesadilla tacos!


Glad to hear about this new change! I live nearby and look forward to checking this out. Dive bar transforming into a new al fresco snack and drink spot is a cool development.

Let's hope social distancing and public health is well maintained so that these venues can remain open. Good luck to the new team!


Great! We tried the tacos a month ago. Will be heading to the nut house soon

Report Objectionable Content
+   3 people like this
Posted by Chris Cuisinot-Cervantes, a resident of Ventura,
on Jul 1, 2020 at 9:18 am


I grew up in the Ventura neighborhood and went to Ventura Elementary school many years ago. So happy to hear of your new venture and will be sure to pay you a visit soon.

Report Objectionable Content
+   1 person likes this
Posted by Fr0hickey, a resident of Fairmeadow,
on Jul 1, 2020 at 10:14 am
Fr0hickey is a registered user.


Will definitely go and try the lumpia. I would like to suggest doing crispy pata, if you could.


Outstanding! See you this weekend!!


Go, Chef Darius! You seem like a super-talented, multi-threat chef. May your career prosper, and may you enjoy much happiness.

Report Objectionable Content
+   4 people like this
Posted by Yay!, a resident of Another Palo Alto neighborhood,
on Jul 1, 2020 at 12:49 pm
Yay! is a registered user.


Glad to a Palo Alto neighbor is going to save this great gathering place. Wishing you success, Darius!!!

Report Objectionable Content
+   1 person likes this
Posted by Annemarie Parrish , a resident of Ventura,
on Jul 1, 2020 at 8:24 pm


Looks like Darius is keeping it real in PA. Keep up the good work!


yes we support you

Report Objectionable Content
+   1 person likes this
Posted by Lissy Bland, a resident of Ventura,
on Jul 4, 2020 at 9:12 pm
Lissy Bland is a registered user.


Congratulations, Darius. As a neighbor, I have been enjoying your wonderful creations for years. I am very glad that you now have the opportunity to share your talent with a wider community.


Darius is a great chef. The Nut House is fortunate to have him. Eat up because great food is on the way!


We would love to come try the tacos! Congrats, Darius!


Great story!! Thank you for sharing!Can't wait to try it out!


Would love to try his food. Is there a menu online? Or will I have to come in person and pick up a to go menu?


Hi Elina: I added a photo of the current menu at the bottom of the story. Thanks!