Wrap-up on the Power Outages (and near outages)

Uploaded: Aug 20, 2020
This follows two other posts on the outages.

Okay, sorry for all these posts, but I find the power issues from the past few days fascinating and important. First, California should not have had to initiate last-minute rolling outages on Friday and Saturday. Second, California overcame much more difficult conditions on Monday and Tuesday and avoided blackouts entirely. Finally, we have seen the awesome power of conservation and time-shifting. Lots of people are calling for more/better power and storage. That is all well and good, but it’s expensive, can result in more emissions, and takes a while to come online. Conservation and time-shifting on the other hand are immediate, negative emissions, and save us money. I guess they have no lobbyists, though…

I’ll go through each of those things one at a time.

The Friday Fubar
The rolling blackouts were plain and simple a mistake. The CEO of CAISO, Steve Berberich, said on a call that they knew the regional heat wave was going to make things “tight” but didn’t anticipate how severe the reduction in imports would be until the same day. CAISO was “caught off guard”, and Berberich volunteered “we own not having identified that sooner.” 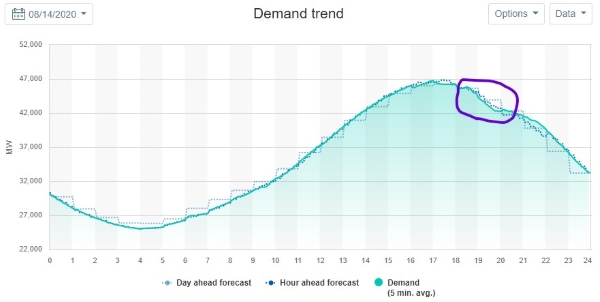 You can see the dropoff in demand around 7pm when rolling blackouts were initiated. This is the tightest time in summer, when demand is still quite high and solar has dropped off. (Source: CAISO)

The larger point is that we should recognize that some of California’s clean energy story was predicated on having neighboring states with an ample supply of 24x7 dirty energy. As our neighbors are cleaning up and shutting down coal plants (yay!), we have to be more diligent about “securing our imports”, as CAISO put it.

The Monday Miracle
CAISO operators said they had “never seen anything like” the drop in demand that they saw on Monday, which was the key reason why there were no rolling blackouts. A “Flex Alert” normally results in a savings of 400-500 MW, according to CAISO. On Monday we saw around 4GW, or ten times that. That was just incredible. 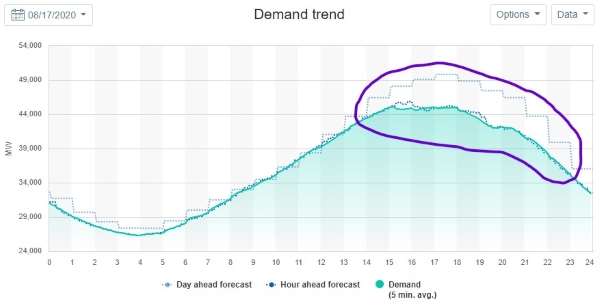 You can see the difference between forecast demand and actual demand, with demand first leveling off at 3pm. (Source: CAISO)

The larger point here is that we can do much more with conservation than we have done. When we have electricity prices 10-20x their normal price, there is plenty of room to pay people to use a little less electricity when we are running so low. 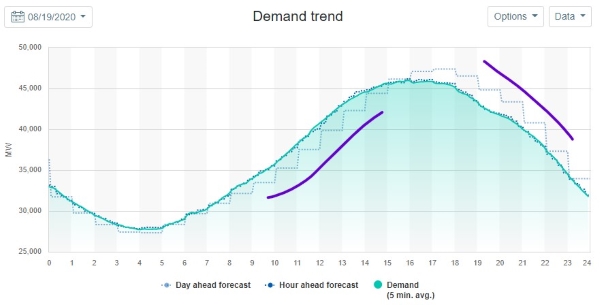 We over-used in the morning and under-used in the evening, which is a cheaper and cleaner way to use electricity. (Source: CAISO)

The upcoming “time of use” rates we will all see soon are an attempt to move us in that direction. More generally, once smart meters are rolled out, there is a lot more our utilities can do to make the cost of power at different times more transparent to end-users, and so make the market more efficient.

Thursday Thrift
I have no idea what happened on Thursday, since there was no Flex Alert. Did electricity users suddenly realize they can easily save energy? Did California quietly ask some big users to reduce use? Are the fires having an impact? Looks like CAISO’s day-ahead forecasting is going to need some polishing… 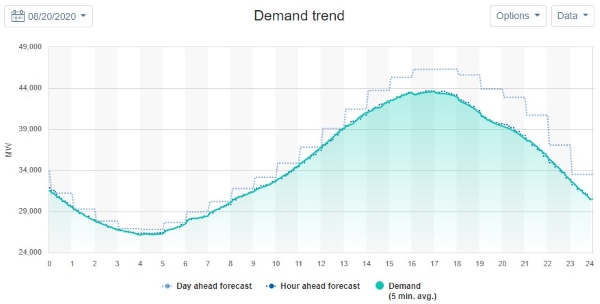 Demand was way below forecast on Thursday for some reason. (Source: CAISO)

I’d be interested to hear what lessons you learned and/or what questions this raised for you. I’ll go back to my regularly scheduled posts starting this Sunday…

Update (Sept 29): There is a great article in UtilityDive on so-called demand-response, or saving power (and cost) when power demand is high. It is by far the most economical way to address high loads imo. "Nearly 200 GW of flexibility ... could reduce the projected 2030 U.S. peak load 20%, avoiding over $16 billion annually in costs." We have to get past our reflex thinking "We need more power" to "We need to emphasize dynamic pricing to get us all to use power at smarter times."

Claude Ezran is a registered user.


Thank you, Sherry, for this very informative article. My only comment is that there is something deeply wrong when California, the 5th largest economy in the world, has to cut power like in the developing world. We need to do much better than that with conservation, demand management, storage and production.

Report Objectionable Content
Posted by Justin Case, a resident of Another Mountain View Neighborhood,
on Aug 22, 2020 at 9:41 am
Justin Case is a registered user.


With all of the Covid-19 related closures (i.e. businesses & office buildings etc.) one would think that the overall demand for electricity would be lessened regardless of grids, global warming trends & related climate change et al.

The rolling blackouts were probably more attributable to
public utilities mismanagement or the diversion of AC to preferred sites.


Report Objectionable Content
Posted by eileen , a resident of another community,
on Aug 22, 2020 at 10:14 am
eileen is a registered user.


Years ago in Vermont we had "time of use " rates with a huge difference between peak and non-peak hours. We installed a pretty primitive system that simply shut off our electric heat during peak hours. Not so much fun in the winter between 5 and 9 but we saved a lot of money and power. Weekends the rates were non peak 24/7. The new proposed time of use system will be luxurious.

This barbecue business was kicked out of Belmont. Now it's a Sunday fixture in Redwood City.
By The Peninsula Foodist | 6 comments | 5,534 views

Can the Memphis police behavior ever happen here?
By Diana Diamond | 43 comments | 2,447 views