Uploaded: Aug 22, 2020
UPDATE: As of Jan. 20, the Nut House has permanently closed, co-owner Ginger Montooth confirmed. They hope to reopen elsewhere and are "looking for a partner or someone that wants to reopen and buy the business," she said. They plan to auction off pool tables, bar stools and other items from the dive bar.
UPDATE: As of Aug. 26, the owners of the Nut House said they again have decided to close the bar until further notice, citing hot weather, poor air quality and difficulty operating under public health restrictions.

The outdoor patio at Antonio's Nut House was full on Friday and Saturday nights, what were supposed to be its final days of business for the foreseeable future -- so full the owners said that if the community continues to show up in force for the dive bar, they will be able to keep it open two days a week. 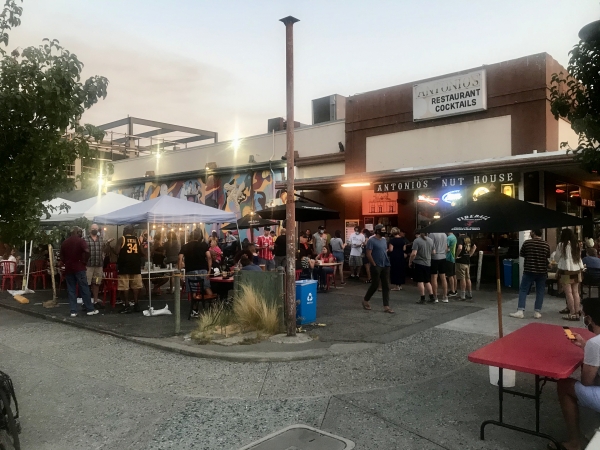 "The community loves this watering hole," co-owner Ginger Montooth said on Saturday evening, uplifted by the full tables and line of people waiting to drink and eat at the California Avenue bar for the last time. She said at one point, people were chanting "Save the Nut!" Customers scooped up Nut House t-shirts, hats and beer mugs until they sold out.

"We're going to try and ask people there tonight: 'Will you come back and support us Thursday and Friday nights?'" Montooth said. "That way we can run the air conditioning those days, have enough food to serve and do everything within the legal constraints ... and maybe survive?"

The Montooth siblings, whose father Tony Montooth ran the Nut House until his death in 2017, had decided this week to close the bar for now after reopening in late June. They said they were losing money and couldn't see a sustainable future without being able to serve customers inside the bar. 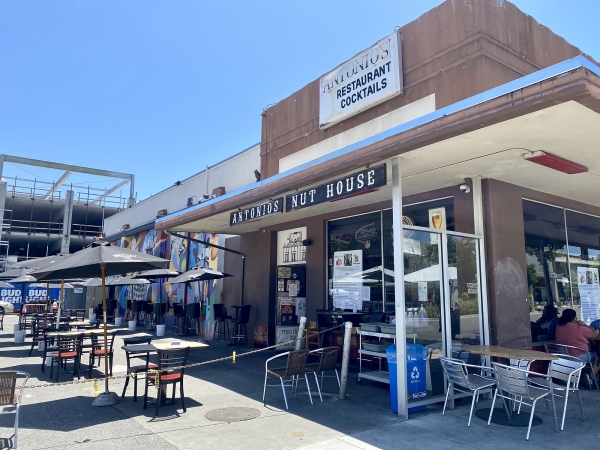 Antonio's Nut House reopened in late June with a socially distanced outdoor patio in the next-door parking lot and a new chef in the kitchen. Photo by Elena Kadvany.

Several notable tech entrepreneurs and longtime customers have informally offered to help save the Nut House, Montooth said, but nothing has come to fruition yet. (Social media posts showed Elon Musk was there on Friday night.)

Before the coronavirus hit, the siblings faced the looming deadline of a lease that expires in December. Montooth said they had money set aside in the hopes of securing a new location of the Nut House but have since spent that, along with much of their savings, to keep the business afloat since the shutdown started in March.

"We're hoping that an angel investor will come and purchase the real estate so that the Nut House can live on for another 50 years," she said. "If anyones going to buy this property, it's our customers. They don't want to lose that community, that watering hole, a place to go.

"There's nothing else like it anymore," she added. "This is the last man standing and the community really wants it to survive."

ALB is a registered user.


So thrilled that there is hope for Antonio's Nut House. Glad that some well- off tech entrepreneurs are going to step up. They realize that once their favorite local haunt is gone -- it is GONE. The quirky bar helps foster community in Palo Alto. Good luck to the Montooths in keeping their beloved bar and resto on California Avenue.

Report Objectionable Content
+   1 person likes this
Posted by sueppr, a resident of Duveneck/St. Francis,
on Aug 24, 2020 at 11:34 am
sueppr is a registered user.


Love the Nut House. We have had many great times there. Looking forward to trying the new food!

Jumping on a bandwagon that ends up breaking down
By Diana Diamond | 22 comments | 5,192 views