Craving B. Patisserie's perfect pastries? The San Francisco bakery is popping up in San Mateo next week

Uploaded: Jan 12, 2021
Peninsula-dwelling fans of San Francisco's B. Patisserie, mark your calendars: The standout French bakery is bringing its pastries to the Peninsula next week.

B. Patisserie's "on the road" concept is coming to Sushi Sam's Edomata in downtown San Mateo, meaning people can preorder pastries and pick them up at the restaurant on Monday, Jan. 18. 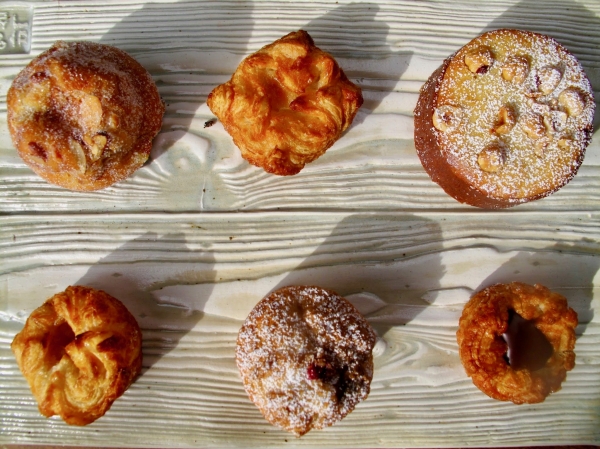 B. Patisserie popular pastries will be available for pickup in San Mateo on Jan. 18. Photo courtesy B. Patisserie.

Owner Belinda Leong said she noticed many of her Peninsula customers weren't coming to the bakery as often during the coronavirus shutdown.

"Since the pandemic, we noticed that a lot of our customers live on the Peninsula and realized they weren't coming to the bakery as often. They didn't want to leave home as often, so we decided to meet them halfway," she said.

B. Patisserie has offered previous "on the road" pastry pickups at restaurants in San Ramon and Oakland but this is the first on the Peninsula. Leong said she chose Sushi Sam's as a longtime customer and personal friend of the owners. (Plus, "I LOVE THEIR FOOD!" she wrote in an email in all-caps.)

The menu includes two pastry boxes, one with a dozen mixed items (including classic and black sesame kouign amanns, passionfruit bostock, caramelized bread pudding, croissants and chocolate chip cookies for $55) and another that comes with six of B. Patisserie's wildly popular kouign amann ($35). B. Patisserie granola will also be available ($8). Only boxes are available rather than a la carte items to minimize lines and crowding.

If this pickup is successful, Leong hopes to offer it again in San Mateo as well as in Palo Alto.

The shutdown has prompted several San Francisco eateries to bring their food the Peninsula via delivery or pop-ups, including Azalina's, Wayfare Tavern and Wise Sons Jewish Delicatessen.

State Street Market plans overhaul of its eateries as it cuts ties with Bon Appétit, triggering layoffs
By The Peninsula Foodist | 11 comments | 3,994 views

Doing more with the natural spaces we have
By Sherry Listgarten | 6 comments | 2,563 views