Craft cocktails without pretension? Bar Zola says they have the recipe.

Months after delays brought about by construction permit challenges and the COVID-19 pandemic, Bar Zola, the bar companion of French restaurant Zola, is now open on Bryant Street in Palo Alto. The bar features a beverage program which aims to fill a void of craft cocktail bars in the city. "We're gonna be the best cocktail bar on the Peninsula," owner Guillaume Bienaime said.

Opening a bar connected to a well-established restaurant like Zola can be a complex affair, requiring chefs and bar managers to collaborate and decide on the role cocktails will play as part of the dining experience and how their flavors might support the food menu. Bienaime threw this complexity out of the window when he decided that the mission of Bar Zola would be simple: "I've always thought there's nowhere for you to drink a cocktail in Palo Alto. And so that's our first goal, to just create a place to drink cocktails." 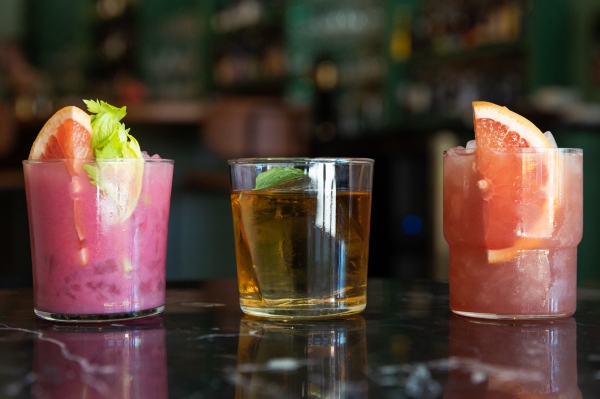 Though both Zola and Bar Zola share a food menu, a kitchen and an owner, the bar feels like a distinct entity. When Duncan Harrison first began working with Bienaime in the early days of the bar's construction, he proposed a concept cocktail list to complement the restaurant's classically French bistro dishes. Harrison imagined serving cocktails that felt as French as Zola's beef bourguignon, featuring mostly French spirits, aperitifs and herbs like tarragon. When Bienaime (who was born in France) first considered the proposal, he thought about his own dual French and Californian identities and suggested that Harrison not limit himself only to French flavors and ingredients.

Returning to the drawing board, Harrison took inspiration from "Meehan's Bartender Manual," a comprehensive treatise on how to conceptualize, build and run a bar penned by craft cocktail pioneer Jim Meehan. Adopting Meehan's strategy of making the bar's concept fit the neighborhood rather than the other way around, Harrison decided on an intentionally curated menu for the bar's opening to gauge the response of his customers.
"Bars are supposed to be something that come in to make the neighborhood better, not change it," Harrison said, adding that his plan was to remain flexible to the tastes of the local community. "If we need more vodka drinks on the menu, we're going to do it," he said.

Though Harrison estimates that the opening cocktail menu will be about half of its eventual length, Bar Zola has still tried to offer something for everybody, or as he puts it — a cocktail menu that is, "unpretentious, fun to drink and complex enough to satisfy just about anybody." The resulting menu showcases an assortment of cocktails across five categories: sparkling, citrusy and refreshing, stirred and boozy, low-proof and no-proof (mixed drinks containing no alcohol). 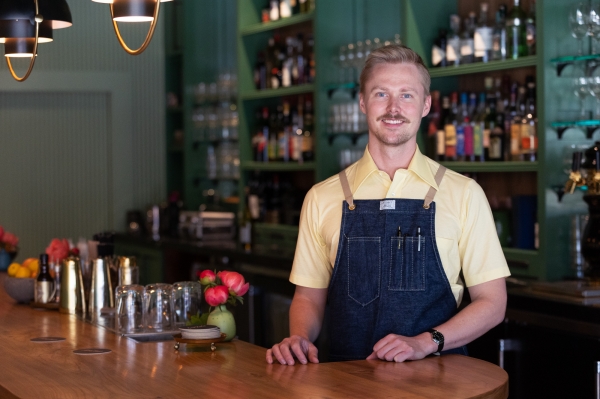 "It's kind of like a neo-tiki cocktail list," Harrison said, referring to the flavor that are used in many of the bar's cocktails, which feature plenty of citrus and spice — hallmarks of classic tiki cocktails.

Though tiki flavors are certainly abundant in the "citrusy and refreshing" category of the menu, Harrison's love of tiki has also influenced his "stirred and boozy" drinks like the Rude Boy, which he describes as an "old fashioned in a Hawaiian shirt." The drink is made with a base of both Barbancourt and Plantation Caribbean rums for sweetness and complexity (in place of whiskey), and gets its tiki twist from Bittermens Elemakule Tiki Bitters, which lend cinnamon and allspice flavor, as well as orange bitters and gomme syrup (a sugar syrup thickened with gum arabic) for body and texture.

Where Bar Zola may stand out amongst many other craft cocktail bars on the Peninsula is in Harrison's approach to thoughtfully crafted cocktails made with low amounts of alcohol or no alcohol at all. "If you come in and spend the money on something that doesn't have liquor in it, it should be interesting," Harrison said, noting that most non-alcoholic cocktails he samples at bars are merely reproductions of classic cocktails made with non-alcoholic distillates. 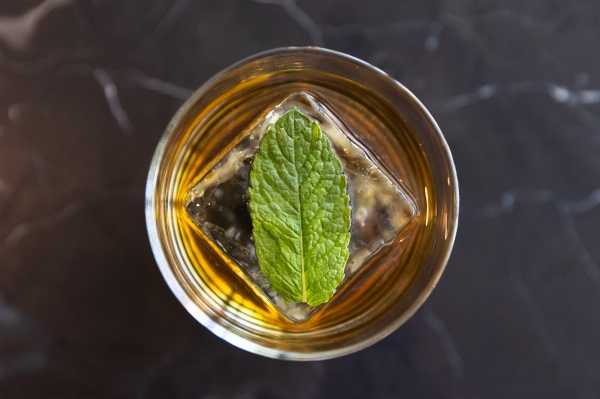 Rude Boy brings the flavors of tiki to the classic old fashioned. The drink is made from Rhum Barbancourt, Plantation pineapple rum and two kinds of bitters for complexity. Photo by Magali Gauthier.

Harrison has also considered the modified drinking habits of customers during the pandemic. "Going out to a bar and having like five or six drinks is kind of becoming less and less logistically possible," Harrison said, noting that many customers are reluctant to use ride-sharing services that would have otherwise assured safe passage home after a long night. Seeking to provide low-alcohol offerings that are delicious enough for customers to order a second round while still drinking responsibly, Bar Zola uses smaller quantities of flavorful liqueurs and cordials like Haus Alpenz Byrrh Grand Quinquina (an aromatic wine-based aperitif) and Grand Marnier for complex flavor with less alcohol.

For customers who prefer not to drink alcohol at all, Harrison noted that one of the most popular drinks served during the bar's soft opening has been a non-alcoholic one. The Speak Low is made with muddled grapefruit and celery, lime juice and a hibiscus-cashew orgeat that Bar Zola makes themselves. "Spirits provide body just as much as they provide booziness," Harrison said, noting that the cashews in the drink provide the mouthfeel and richness that are usually imparted byThough other housemade syrups like the hibiscus-cashew orgeat and unique liquors like Pineau des Charentes abound in Bar Zola's drink wells, Harrison says he wants to keep the menu as "unpretentious" as possible. "We're never going to tell you that there's Ticaloid (a culinary stabilizer) and xanthan gum in our hibiscus-cashew orgeat," Harrison said, noting that he wants to remove the "guesswork and Googling" that can come from trying to read an overly complicated cocktail menu.

Instead, Bar Zola relies on flavor-driven descriptors on their menu to help customers find cocktails that best match their tastes. In the case of the low-alcohol Coupe de Ville, for example, the base of Martini & Rossi Fiero (a bittersweet vermouth imbued with flavor from Spanish oranges) is simply described as "Italian, red, bitter." 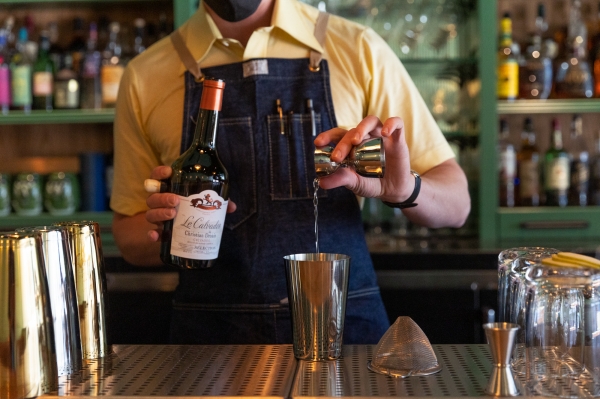 "Bars are supposed to be something that come in to make the neighborhood better, not change it." — Duncan Harrison, Bar Zola's bar manager. Photo by Magali Gauthier.

Another area where Bar Zola hopes to be unpretentious is in its ability to provide access to cocktails that don't break the bank. Though Bar Zola's house cocktails are priced at fifteen dollars each (not uncommon for craft cocktails in the area), Harrison says that the team at Bar Zola will always be able to recommend a well-made classic cocktail like a daiquiri for between $10 and $12.

Though that price point will be a welcome one to budget-conscious drinkers, Harrison says offering drinks in that range is also about giving more options to the bar's regulars. "Our staff is going to be intimately trained on our spirits list and what would work best in the classics," he said, adding that a Bar Zola regular who always drinks from the menu should be offered the chance to branch out and try something else for the same price, or less than that of the house cocktails, depending on the customer's choice of spirit.

While Zola remains closed for dine-in service, Bar Zola will serve an abbreviated version of the restaurant's pre-pandemic menu, which diners can enjoy inside, or in a newly constructed parklet. Bienaime has combined a number of small bites like olives, salmon tartine and tuna tartare with larger entreés of Hokkaido scallops cooked in a carrot-truffle nage with shiitake mushrooms, or steak au poivre served with pommes frites.

Danna is a registered user.


Nice and I hope to get there now that we are getting through this. However I have to say that the cocktails at Flea St are inspired.

Report Objectionable Content
Posted by RL, a resident of The Crossings,
on Jun 1, 2021 at 2:34 pm
RL is a registered user.

State Street Market plans overhaul of its eateries as it cuts ties with Bon Appétit, triggering layoffs
By The Peninsula Foodist | 11 comments | 4,133 views

Doing more with the natural spaces we have
By Sherry Listgarten | 8 comments | 2,888 views

Can the Memphis police behavior ever happen here?
By Diana Diamond | 11 comments | 796 views