A mammoth warehouse stands before me in South San Francisco. Surrounded by ghostly quiet industrial buildings and biotech offices that closed in the pandemic, I think I might be lost looking for lunch at 312 Swift Avenue.

But when someone runs down a loading dock ramp with a bulging brown paper bag wafting the fragrance of a fresh fry, I know I've found Respectable Bird, one of the latest ventures from restaurateurs that have served churros at the Chase Center and fried chicken at Off the Grid. 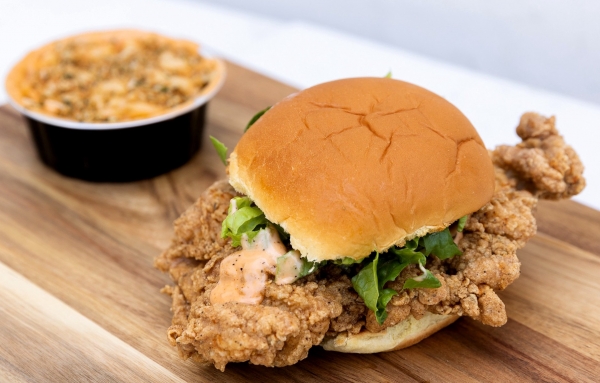 In a South San Francisco ghost kitchen, the Respectable Bird team is churning out spicy fried chicken sandwiches and mac and cheese topped with a Panko bread crumb and parmesan topping. (Photo by Magali Gauthier)

Later, co-owner Jason Angeles confirms: "A lot of people are sketch when they first come. We put up as much signs as possible," and, "We're churning out really great food out of here."

The commercial warehouse is a ghost kitchen where the Respectable Bird team fries up chicken, churros and waffle fries, served with other sides like mashed potatoes, steamed rice, coleslaw and cornbread. These items mark the launch of a revamped menu and new brand since the team split from SSF Chickenbox this summer.

This is a place where you grab and go for yourself, or pick up a delivery for someone else. There are ovens neatly stacked one on top of the other in steel frames and cardboard boxes lined up on wooden pallets, but no tables.

When my name's called, I take away a spicy fried chicken sandwich and mini churros. I have every intention of starting with dessert first — possibly in the not-so-discreet location of my car. I'm that eager to try. 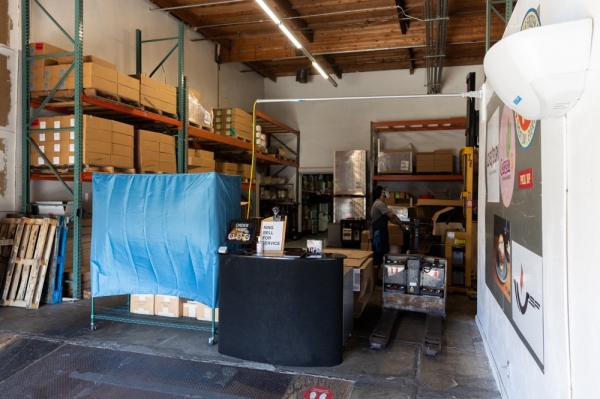 The entrance of the warehouse where customers pick up orders at Respectable Bird in South San Francisco on July 21, 2021. (Photo by Magali Gauthier)

Fried chicken is just one food craving that Angeles has sought to satisfy. Over the years, he's developed and delivered what the people want (champagne-flavored candy or White Rabbit candy frozen custard, anyone?).

"I didn't have a culinary background at all, but I know how to Google," Angeles says. "I've always had a higher appreciation of food and seeing trends."

Out of the bunch, only Taylor had prior experience in the food industry. He's a classically trained chef from the Mina Group, with experience at San Francisco's Taj Campton Place, Ozumo SF, Chotto, PABU Izakaya and The Ramen Bar. The others learned as they went along.

Before spinning out an almost dizzying array of food businesses, Angeles was laid off from a corporate tech role. In 2009, he opened a UPS franchise and met Isip and Perez. They were his first store managers. 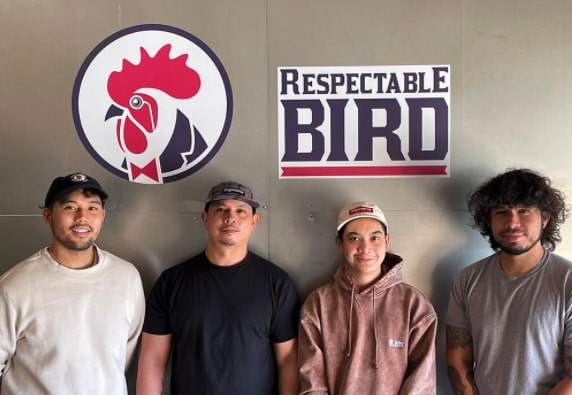 Frozen Kuhsterd launched with seasonally flavored and alcohol-infused custards in 2011, followed by Sugar & Spun with natural and organic cotton candy in 2013, Hookt Doughnuts in 2015 and IVSF Catering and Churreria SF in 2019.

"You gotta try the sandwich at Respectable Bird and Love Burn," Angeles says. "I'll stand behind it: They're the two best fried chicken sandwiches."

Angeles says they get their potato buns from Martin's, the same Pennsylvania source as Shake Shack ("It blows away brioche and Kaiser rolls," Angeles says), and that each sandwich has a half pound of thigh meat ("It hangs out on both sides, if you open up the top"). 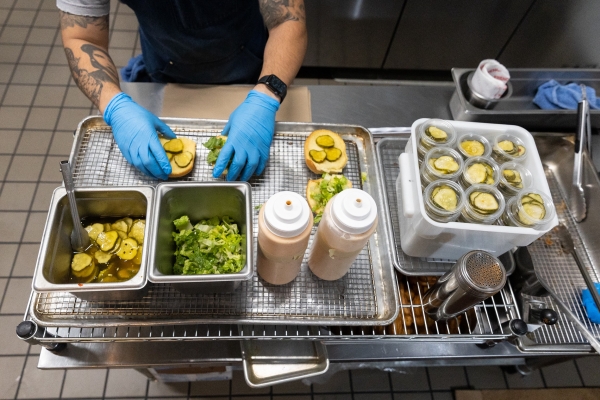 Institutions like the acclaimed Prince's Hot Chicken Shack in Nashville and the 2020 Peninsula favorite Cocina Canares have set a high bar for fried chicken. Respectable Bird's is both crispy and juicy. The spicy chicken sandwich has a spice that satisfyingly creeps up with stealthy intensity. The potato bun holds up, bearing special sauce and all. As promised, the thigh juts over the potato bun, in-your-face. If more sandwiches had more filling than bread like this, I would not be sad.

Perhaps one day I'll graduate to Love Burn's Level 4 spice level (on a scale of zero to four), that Angeles says is, "like, the hottest thing on the planet. We give a small carton of milk with every order, but I don't even think that helps."

For now, I'm content where I'm at, lost in a swirl of sugar and cinnamon as I munch on Respectable Bird's churros dipped in boozy, buttery bourbon caramel sauce.

These churros and chicken are not the only fare coming out of the warehouse ghost kitchen. Respectable Bird is currently one of four brands operating in the space, shared with Frozen Kuhsterd, Churreria SF and IVSF Catering. 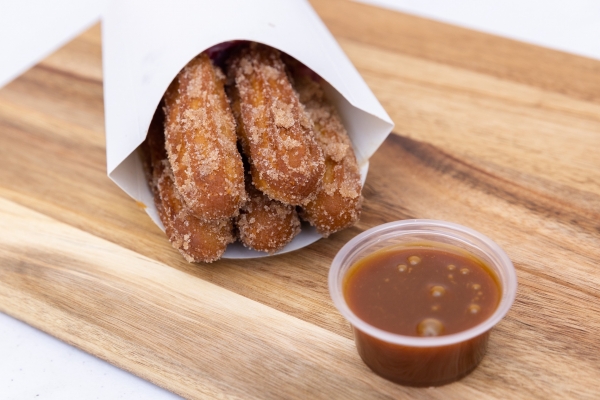 Respectable Bird's mini churros have a big dusting of cinnamon and sugar and a side of bourbon caramel sauce. (Photo by Magali Gauthier)

There's a mobile extension that the team rolls out with whatever a particular occasion requires, whether frozen custard or catering menus featuring Filipino, Japanese, American Cajun, Italian and Spanish options.

"We have a pre-existing food truck that we operate on the fly," Angeles says. They plan to take it to festivals like Outside Lands in San Francisco, and possibly Bottle Rocket in Napa, replacing the magnetic signs on the side of the truck as needed.

Despite the flexibility that the ghost kitchen model has offered, it hasn't been without its challenges.

"At the onset of the pandemic, all of our catering went to zero. We had this commercial question — we needed to figure out what we were going to do to make any kind of income," Angeles says. "We had this big bill for this kitchen that was newly built at that time."

As one antidote, they participated alongside more than 80 other restaurants to provide meals to San Mateo County seniors during the pandemic with Great Plates. That relief program and its federal funding ended July 9.

"It was really rewarding. It kept us going with the lights on," Angeles says. 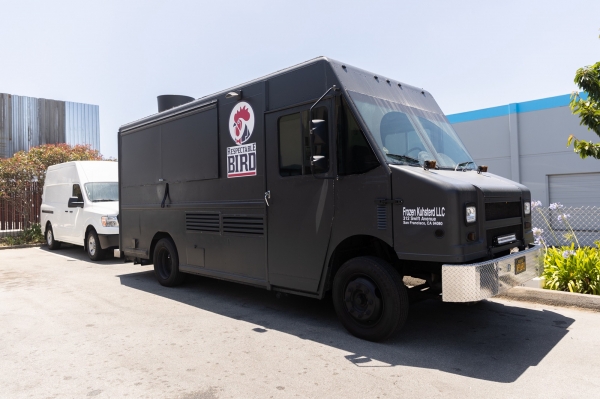 The team rolls out the Respectable Bird's food truck where it's needed. Diners can also order for delivery, or take out from 312 Swift Ave. in South San Francisco. (Photo by Magali Gauthier)

Angeles is still bullish. He and the team are currently developing yet another brand, this time with a focus on pho. In the meantime, Respectable Bird is ready to take on the lunch crowd. Angeles expects an influx when workers return to their offices at nearby companies like Genentech.

"Once they go full force and the other biotechs follow, I think we're just going to get destroyed," Angeles says.

The way he says it, I take it that's a good thing.

For information on relief for restaurants and other small businesses, visit smcstrong.org.

State Street Market plans overhaul of its eateries as it cuts ties with Bon Appétit, triggering layoffs
By The Peninsula Foodist | 11 comments | 4,199 views

Can the Memphis police behavior ever happen here?
By Diana Diamond | 14 comments | 990 views