Nearly 30 years ago, José Dolores Marquez, Giovanni Marzocca and Roberto Pugliese drove from "over the hill" toward the Coastside. They'd carved out careers at Italian restaurants in San Francisco and on the Peninsula. They knew Half Moon Bay for its farms and flower growers. But could the town of about 10,000 people support their dream to open their own restaurant?

Time has told. The location positioned them perfectly to establish partnerships with local food purveyors like the anglers at Pillar Point Harbor, and local farms, many of which happened to be founded by immigrants from Italy. They opened Mezzaluna Italian Restaurant in 1993, and have since developed a following of local residents and visitors alike.

"Half Moon Bay is like our little hometown," co-owner and chef José Dolores Marquez says.

Recently, the Peninsula Foodist caught up with Marquez to chat fresh food and cultivating a culinary career from scratch. 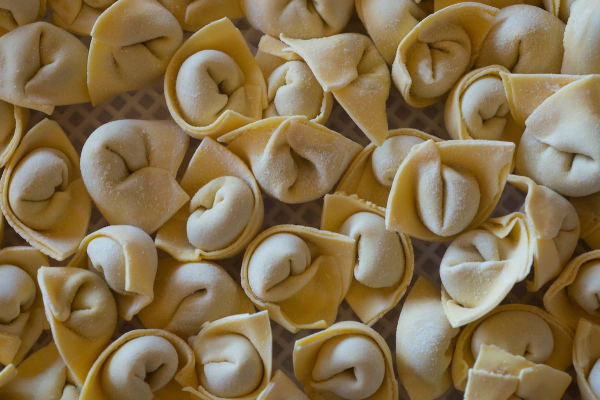 "It's more like, natural, simple. It’s the best. It's not too complicated. That's why I like it. You don't have to make stocks or reduce a sauce. You grab a fry pan, chop the onion and garlic, and you can make a pasta out of that" Chef José Dolores Marquez started his Italian culinary career at the age of 17 in the North Beach neighborhood of San Francisco. Photos courtesy of Paulette Phlipot.

Peninsula Foodist: How did you begin your career?

José Dolores Marquez: I have relatives in (Los Angeles) and I came over to see my aunt, and then my uncle who lives in San Francisco. When I called him up to see how he was doing, he said, "I'm doing fine. Why don't you come over and spend a week or two?" I never went back to LA. It has different weather, I like it better here. San Francisco's a beautiful town, with the bridges and a fisherman's wharf. East LA, it was a totally different atmosphere. I thought I'd be there for two months, and I ended up here. I never went back.

I started 40 years ago working in San Francisco, different places. Some aren't even there anymore. I'm learning how to cook Italian food — after a while it becomes like a passion. Of course, you need to work, so I mixed two things in one. It's how it happens.

I was 17 years old when I started. You learn the basics, cutting vegetables, prep, washing dishes. You start from there, all the way up to starting cooking.

When I started cooking, I was about 20. To see a kitchen that big, I was in shock, like "Wow!" I thought I'd be working at a small kitchen, making 20 or 30 dishes at most. But you find yourself covered in dishes, and pretty soon being in the line cooking for 300 or 400 people. It's incredible. At the beginning it was kind of scary, but after, you get used to it.

Since then, it's been one restaurant, and after two or three years, I'd change to another one in the North Beach area. Pretty soon I was in San Mateo and Burlingame. Then I came to Half Moon Bay and got involved at Mezzaluna with Giovanni and Roberto.

Foodist: What was it like for you to learn a new cuisine?

Marquez: It happens to be the first place I was working was an Italian restaurant. I was working on this place called Grazie, which means "thank you" in Italian. I worked there for about four years, before I was working at another place.

(North Beach) was totally different then. Now there's not as many Italian restaurants as it used to be. It was great, it was beautiful to be working in the area, and be part of all the people that were working at that time. San Francisco is a tourist palace, but in North Beach it was mostly local people.

Especially for a person like me, coming from Mexico, learning Italian food was tough. You don't know the different types of food. As soon as you start learning, you get to know the ingredients and put them together — that was fun. It's totally different. I was not even allowed to cook in my house, because the only people allowed in the kitchen was girls. Boys were not allowed. It was a different experience to come over here and to start working in the kitchen. You never thought you'd be doing that, but it happens.

I started to appreciate that — the feelings you have after so many years of hard work and learning. It's a great experience. 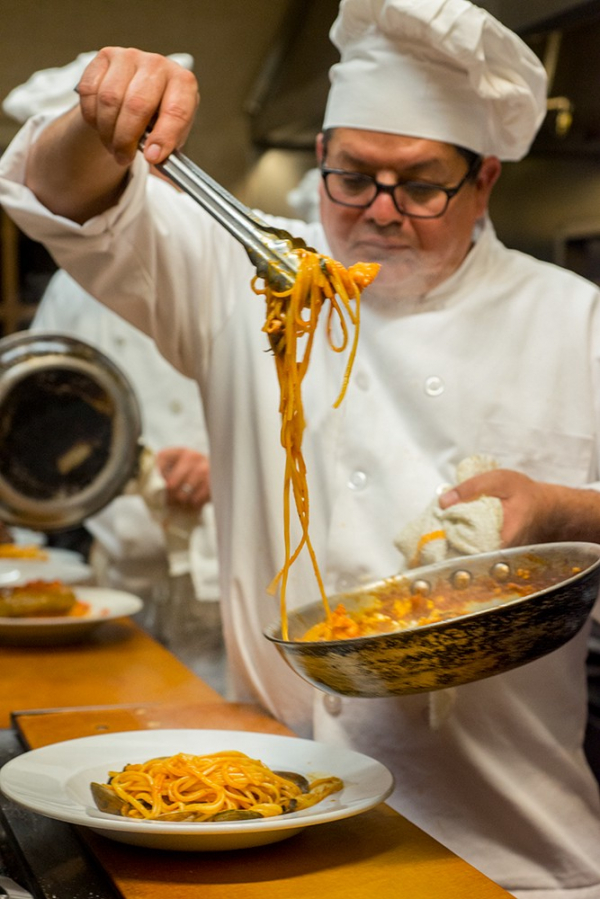 Foodist: What sets Italian cuisine apart from others?

Marquez: Italian people, they have a passion for the food. When it comes to what you do in the day, it's like you have to eat first. It's the first priority — the food — and everything comes after.

The ingredients depend on the region — if it's the north, south. If you have good tomatoes, you don't have to do too much. They use olive oil, of course, and salt and pepper, but not too many others. It's more like, natural, simple. It's the best. It's not too complicated. That's why I like it. You don't have to make stocks or reduce a sauce. You grab a fry pan, chop the onion and garlic, and you can make a pasta out of that. If you make a nice tomato sauce, it's the base for a good pasta. With a little basil, it's even better. It's good as it is.

I like to eat, and I love Italian food. I eat other cuisines too and it's all good, but this one? I was able to make it, and enjoy it. When you cook it and serve it to customers and see the satisfaction, and they love it, it's a good feeling.

Foodist: What inspired you to open your own restaurant?

Marquez: We (Giovanni, Roberto and I) decided to move on after we'd been working with other people.

We got the idea to go to Half Moon Bay.

We just drove by, to go to the beach and the harbor. You think it's a fishing place — at least we thought that. It was not a place to do business.

There was a place available. We went to see it because the price was right and the small place, we thought we could try: Everything was in the place. A few tables and chairs had to be fixed, but it was a good opportunity. So that's why we came in. It's one of those opportunities — when it comes in front of you, you just grab it. Half Moon Bay is like our little hometown.

A lot of people told us, "You're not going to make it," because Half Moon Bay's a small town. You drive along and you don't see that many houses like San Francisco, San Mateo, other towns. But after a while, you get to know local people. They followed us. At least 60% of the business we do is local people. It's a nice town, and has beautiful people.

We started slowly and built up. Pretty soon, after a couple years, we were already on the move. Now it's 28 years. We think we do something that people like. We saw the place and opened in 1993. We tried and it worked, so the rest is history. 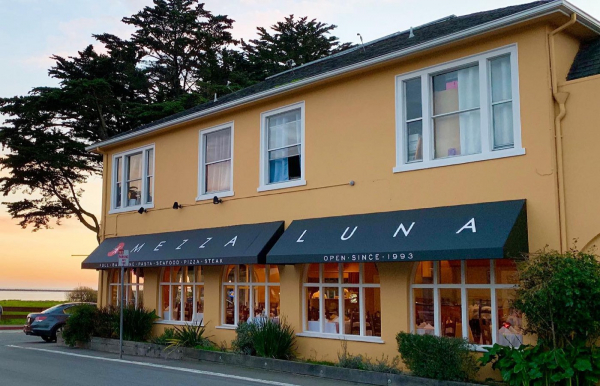 José Dolores Marquez, Giovanni Marzocca and Roberto Pugliese saw an opportunity to open their own restaurant in Half Moon Bay. They’ve been serving the Coastside community since 1993. Photo courtesy of Paulette Phlipot.

Foodist: The longevity of the restaurant is impressive. What's the key?

Marquez: We try to make simple, good food. We cook everything from scratch. We treat our customers like family. At least, we try. Everybody's welcome.

It's not the type of place (that) if you're not dressed right, people give you looks. We're good with customers and a friendly atmosphere. We'll get people that say, "Can you make pasta like this?" "Can you grill me a fish?" We try to make people comfortable.

I think we have a good thing going on. We've built it up after all this time, changing the menu and choosing different dishes. What most people like, we keep. We have daily specials so whatever's fresh, we make it. It's enough. It's simple, and always tasty.

Foodist: Tell me about the menu.

Marquez: We have pastas, pizza, chicken, veal, lamb, steaks, salads and desserts. We make all the desserts, and we try to do our fresh pasta too, and make our own bread. You can find capellini to fettuccine, ravioli. We have pizza. We have the fish of the day: We call the company and whatever they have, we buy it and serve it. We have a full bar.

Local people know the menu by heart, they don't even have to look because they know everything already. We have customers who probably eat the same things for 20 years. It works, because we still have the same recipes and we do the same way. So if you have a pasta you ate 10 years ago, and you say you have a craving for that, you go back — it's still the same. We've always been steady.

But some people, especially in the summer, they go for seafood. When the winter comes, it's more like meat.

Foodist: And it sounds like a lot of your ingredients are local.

Marquez: We try to buy local. We buy the seafood from a local person here. We buy it exclusively fresh, from the local fishermen. Like now they're catching halibut, petrale, rockfish, sand dab. Pretty soon I think it's going to be albacore. And crab season, we buy crab and make cioppino. Otherwise you get salmon from Alaska, or Alaskan halibut or swordfish from Hawaii or Mexico. Of course you have to get different stuff, that's why we buy other types of fish, like (from) different countries.

(But) we try to do local stuff. Everybody grows different things. One grows peas and beans, the other grows Brussels sprouts, and Swiss chard and basil and herbs. We try to get local products and be part of the town too, because it helps each other.

We have breweries with our own beers, harbor with our own fishermen. People come over and buy flowers, even just for the day. There's so many little things to do, and the restaurants. It doesn't look like it has that much, but it does. Downtown is a historical town, small streets and businesses and boutiques. It's a nice little town.

People follow us and support us. Thank them, because if it wasn't for them, we would probably be closed by now.