Ferrari and Toyota: Meet the $15 sandwich from the restaurateurs behind Baumé

Palo Alto's Baumé offers fine dining meals that run hundreds of dollars a head, but starting Monday, Nov. 8, you can order a sandwich for lunch, priced at $14.98 — to go.

B Deux Go is a new grab-and-go concept from the restaurateurs behind the Michelin-lauded Baumé as they pivot their business model in response to COVID-19, and plan for the future.

"I foresee Baumé being something else," said chef and owner Bruno Chemel earlier in the fall. "My new concept won't fit in the (Michelin) book with two stars."

The Baumé team, which is currently comprised of married couple Bruno Chemel and Christie Chemel, maintained two Michelin stars between 2011 and 2019, but requested that Michelin omit the restaurant from its guide. Now, Baumé is no longer listed.

In a previous interview, Chemel said that he cared about the Michelin stars, “But I reach a stage of my life, a stage of my business, when I need to evolve the business…I need to pay the bills, I need to have my life, because owning a two-Michelin star restaurant in COVID in Palo Alto is not easy.”

Going forward, Baumé will continue to serve dinner. But now, diners will also be able to place pre-orders online for lunch from B Deux Go, and then pick up their sandwiches from Baumé's kitchen door on Park Boulevard.

"It's like a (car) dealership: You have Ferrari, and then you have used Toyota, so we try the extremes...you can have both," Chemel said in an interview on Thursday. "It's an opportunity to try more affordable food to try to feed people who don't want to spend hundreds of dollars on dinner. It's an opportunity to please new clientele … The concept is honest sandwiches for honest people. There's nothing fancy." 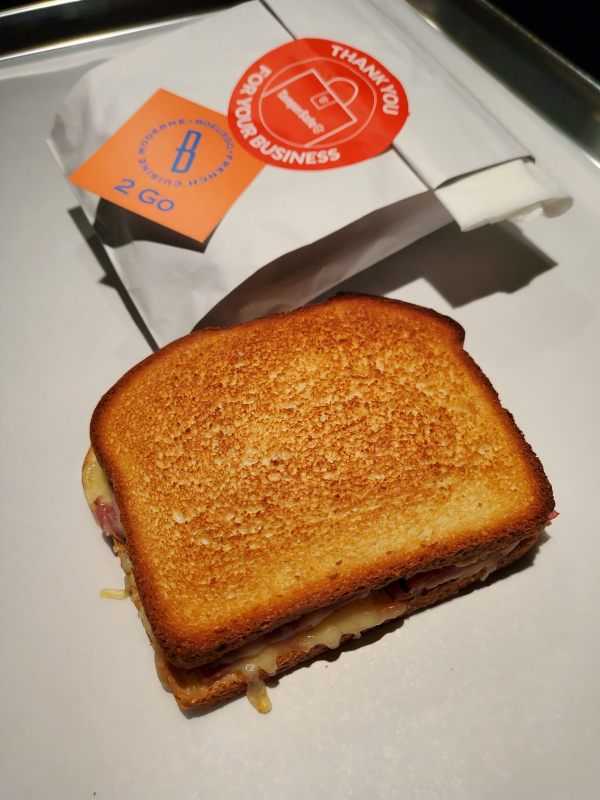 The Chemel family's B Deux Go will offer sandwiches to-go. Diners can pick them up in Palo Alto from the kitchen door of their fine dining restaurant, Baumé. Photo courtesy of B Deux Go.

Unlike Baumé, B Deux Go won't have a flurry of courses. Instead, the menu is pared down for launch, featuring two sandwich types, each served with more than 11 ounces of country-style buttermilk bread, baked to a crispy crunch.

Chemel has built on the idea of a croque monsieur sandwich, modifying it so it can be eaten by hand, without fork and knife. Instead of putting béchamel and cheese on top of the sandwich, there will be no oil or butter on the outside. It's baked "so it's crispy and your fingers are not greasy."

The Chemels will see if the B Deux Go concept works, Chemel said. "If you don't try, you don't know."

Annette is a registered user.

Report Objectionable Content
Posted by Tom, a resident of Downtown North,
on Nov 8, 2021 at 4:14 pm
Tom is a registered user.


This sounds awesome. I hope they can make it work.

This barbecue business was kicked out of Belmont. Now it's a Sunday fixture in Redwood City.
By The Peninsula Foodist | 6 comments | 5,530 views