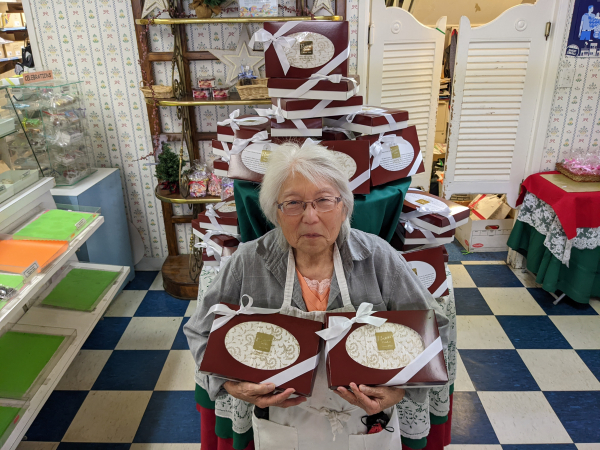 Irene Preston with a selection of Irene's Rescue Boxes ready to be shipped to customers. Photo courtesy Benjamin T. Lambright.

After more than 75 years as Burlingame’s community candy shop, the iconic Preston’s Candy & Ice Cream has been struggling to pay its debts due to the pandemic and the area’s high cost of living. 77-year-old owner Irene Preston has launched a series of rescue boxes, assembling some of the shop’s most popular confections at a special price. Supporting the effort is Benjamin Lambright, a recent Burlingame arrival who became enamored with the shop and is rallying support however he can.

Irene Preston actually bears no relation to the founder of Preston’s, Art Preston, but was a faithful customer, finding that Snickers bars couldn’t compare to the shop’s candies and chocolates. Amused at the “karmic convergence” of the shared last names and always curious about a second career operating the store, she purchased the shop with her ex-husband in 1997 and took over the business after the couple separated.

Preston still employs antique copper mixing bowls that weigh over 20 pounds when empty, and almost all of the store’s confections are still made in-house. Preston’s celebrated its 75th anniversary last year and has a strong presence in many Peninsula residents’ lives. “(There are) a lot of people coming in with lots of stories about their personal connections to the store … it's all part of the community, which makes it wonderful,” Preston says.

Preston also values the shop’s role as a local employer, and she has provided many high school and college students with their first jobs. A former teacher, she calls these former employees her children, telling the story of a now-CPA who couldn’t even work the cash register when he started at the store as a teenager.

Even before the pandemic, Preston faced a labor shortage because all of the candymakers she had trained moved out of the Bay Area to find affordable places to purchase homes and start families. Then, like many other chocolatiers operating in the low-margins industry, the pandemic was devastating. Preston used up her savings to keep the store operating and was forced to manage the business and produce all of the chocolates almost single-handedly.

About eight months ago, writer and nonprofit director Benjamin Lambright moved to Burlingame and started to visit Preston’s nearly every day. He started noticing that the shop was closing before its posted hours and heard Preston explaining her lack of staffing. “At 77, she’s still doing often seven days a week, open to close, to keep this place going. I can’t let anybody who’s working that hard do it on their own,” he says.

Lambright volunteered to rebuild the store’s social media accounts and website. He also has been helping out inside the shop whenever he can. Encountering tremendous support for Preston’s on social media, Lambright started brainstorming how Irene Preston could mobilize these devoted fans. 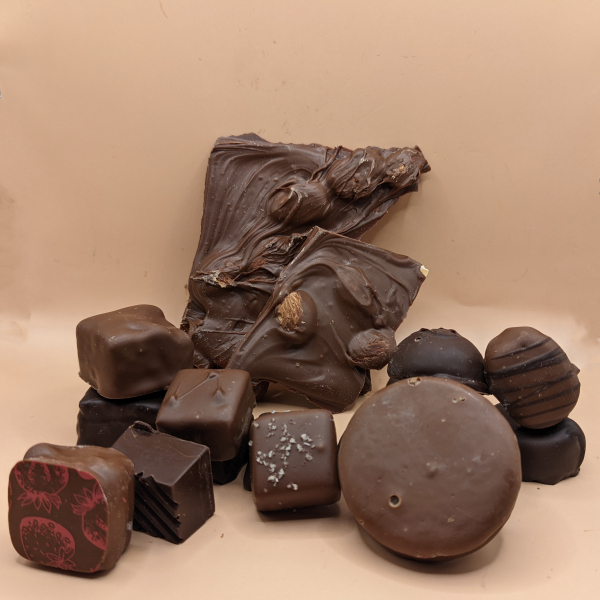 Lambright and Preston introduced their first rescue box in early April and sold out in just a few days. Preston’s was able to make rent in April for the first time in a while, but is still facing significant utility bills and uncertainty covering the rent moving forward. The store is now promoting its second iteration of its rescue box, which includes caramels, almond bark, a chocolate dipped Oreo and other signature treats. It has also introduced a monthly subscription box.

Staffing issues and mounting bills have forced Preston to cut down on production. Easter sales were about half their usual level, and Preston was unable to produce many of the treats her customers have grown up with. She had to turn down patrons looking for fudge bunnies bearing their children’s names and the 20 different varieties of chocolate eggs that have graced Easter baskets for decades. “It's hard for me to not be able to participate as fully as I was before in people's lives,” she says.

New sushi restaurant and steakhouse coming to Palo Alto in 2023
By The Peninsula Foodist | 5 comments | 2,861 views

What Do You Get Out of Being Stubborn?
By Chandrama Anderson | 0 comments | 1,368 views