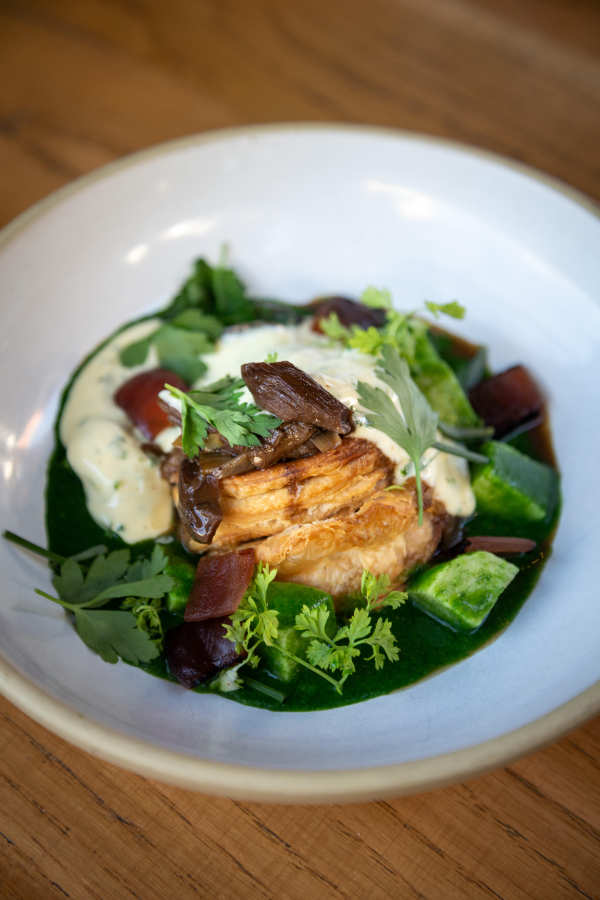 Guillaume Bienaimé's winning dish on "Alex vs. America," braised escargot vol-au-vent with a brown butter bearnaise sauce, is being served at Zola and BarZola through Aug. 25. (Photo courtesy Zola and BarZola)

An email to Zola and BarZola chef and owner Guillaume Bienaimé contained an offer he couldn’t refuse – a chance to compete against chef and Food Network personality Alex Guarnaschelli and two other contestants on Guarnaschelli’s show “Alex vs. America.”

Months after a 12-hour day of filming in Los Angeles, the episode aired on Sunday, Aug. 21, and Bienaimé could finally share the big news with his restaurant's patrons: He had beaten Guarnaschelli and the other contestants to win $10,000, which he donated to chef José Andrés’ nonprofit World Central Kitchen.

“People are definitely happy,” Bienaimé says. “They've been coming to the restaurant for eight years and they feel like they're part of it.”

Bienaimé was born in France and raised there and in the U.S., learning French cooking techniques from his “quintessential French grandmother” who cooked every day, he said on Food Network. He started his career as an intern at the now-closed Marché in Menlo Park and was hired as a sous chef there after graduating from college. Bienaimé moved up the ranks to executive chef before leaving to open Portola Kitchen. He found the space that would become Zola shortly after leaving Portola Kitchen, and he opened the downtown Palo Alto French restaurant in fall 2014. BarZola followed last year.

Before competing on “Alex vs. America,” Bienaimé hadn’t been in a cooking competition since college. He leaned on his experience and a little homework to prepare.

“I watched all of Season One after I found out I was going to be on it and I studied it – I took notes,” he says. “I had to figure out what the judges were looking for and what mistakes people were making. I think because it was the second season you had an advantage if you were smart enough to watch the first season.”

“Alex vs. America” pits Guarnaschelli against three contestants from around the country who are experts in a particular cuisine. The contestants start off in the “survival round” picking between different factors they must account for, such as how much time they’re given to cook and what type of meat they can use. Their food and Guarnaschelli’s is then judged blindly by two anonymous judges, who select the best dish of the round. If Guarnaschelli loses the round, the contestant with the best dish gets to pick the cooking factors again in the “money round,” where the remaining two contestants can win up to $10,000 for beating Guarnaschelli. If she wins the first round, she has control over the cooking factors for the second and final round.

Bienaimé’s episode was focused on French cuisine, where Guarnaschelli’s training is focused. He knew French food is her speciality but says he had prepared to win.

“I know Alex is an ‘Iron Chef,’ but I was born in France. … I can beat Alex because I spent my whole life studying this,” he said on the show.

Bienaimé’s first dish lost to Guarnaschelli, but in the second round he won with a braised escargot vol-au-vent with a brown butter bearnaise sauce (a vol-au-vent is a small, hollow case of puff pastry filled with a savory mixture.) Zola and BarZola are serving Bienaimé’s winning dish now through Thursday, Aug. 25.

When Bienaimé learned he’d won, he was a little surprised but especially tired.

“You’re using every ounce of your brain and body and intuition; you're putting everything out there in whatever time you have,” he says. “You do your exit interview and you leave and you're by yourself. It's bittersweet in a way.”

Bienaimé celebrated the victory by dining with his brother, an LA resident, at Bicyclette that night.

“I had to go to a French restaurant,” he says.

Reflecting on the experience, Bienaimé compared it to a roller coaster – the long day of filming started slow, “and all of a sudden the clock starts.”

“It's not like I was anxious about the cooking part – for me I was doing what I know how to do,” he says. “You gotta be fast, keep your eye on the clock, be smart.”

Bienaimé says he would compete again if another good fit came along, but in the meantime he’s back at work sharing the victory with his customers.

“I like building community and having a neighborhood restaurant – it's not just about the cooking for me,” he says.

Tobias ben is a registered user.


Amazing recipe ingredients combination is too good and looking too deloicious thanks too share recipe.
Web Link


Your win is well-deserved, Guillaume! Congratulations,
Marian and Abe Sofaer

Doing more with the natural spaces we have
By Sherry Listgarten | 3 comments | 1,497 views