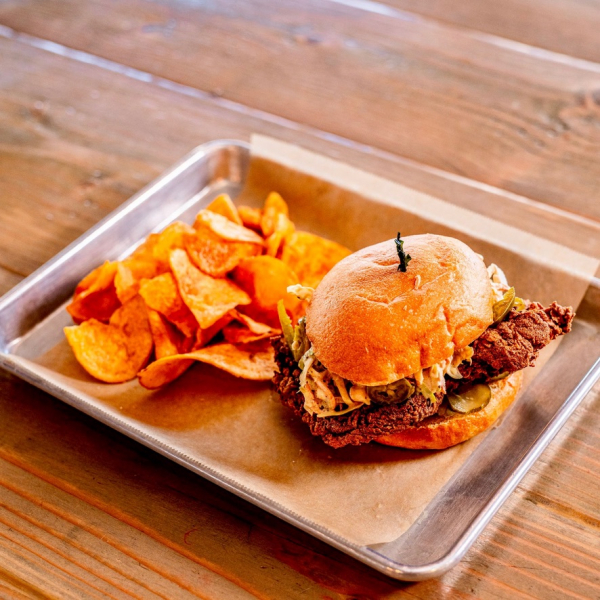 The 'Almost Famous' fried chicken sandwich is made with gluten-free flour for the breading on the chicken and comes with pickled Fresno peppers and black garlic coleslaw. (Photo courtesy State of Mind Public House and Pizzeria)

When Lars Smith and his family opened the first State of Mind Public House and Pizzeria in Los Altos in 2018, the restaurant quickly became busier than the Peninsula family that founded it had expected.

So when they realized they didn't have enough room in their fryers to keep up with demand, one of the menu items they'd carefully developed was written off the menu. The "Almost Famous" fried chicken sandwich became just that – a cult favorite now served only during less busy hours at lunchtime and on Mondays.

Now in preparation for a third location in Redwood City's Marsh Manor shopping center, they're adding extra fryers to better keep up with demand and keep the fried chicken sandwiches as a permanent menu staple. They're developing a menu that includes four or five different types of chicken sandwiches, including a plant-based option, says Smith, State of Mind’s co-owner and executive chef.

"The goal is to have it available all the time in Redwood City," he says.

They're well into construction and hoping to begin the soft-opening process around Nov. 1, barring any major supply chain problems.

One of the obstacles the team has faced in opening the new location has been major backups with getting key pieces of kitchen equipment. At one point in their search, they were told there was an extensive 47-week back order for the fryers they wanted, but they've since sourced the equipment they need, according to Smith.

The original fried chicken recipe is a buttermilk-marinated chicken breast, dredged with cup4cup gluten-free flour. This flour blend gives the finished product a crisp texture and light brown color – being gluten-free is a bonus, Smith says.

The fried chicken is then topped with black garlic coleslaw and Fresno peppers pickled in pale ale and served on a potato bun from Kelly's French Bakery in Santa Cruz. 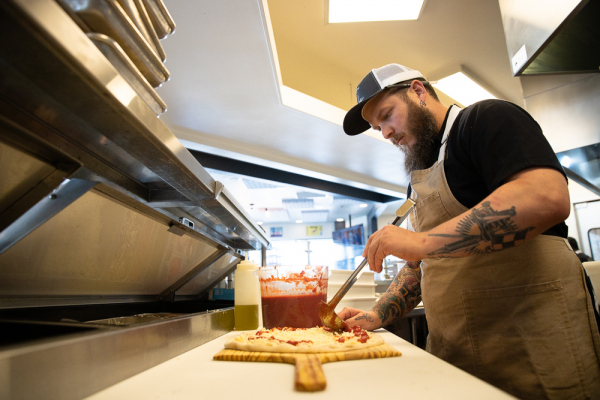 Lars Smith, co-owner of State of Mind Public House and Pizzeria, makes a pizza in the downtown Los Altos restaurant's kitchen in February 2019. (Photo by Magali Gauthier)
The new location will be where the former Squeeze In diner was at the Marsh Manor shopping center in Redwood City, near Menlo Park's Suburban Park neighborhood. The diner, where Smith's brother Andrew had been a regular, had long been closed before the business team considered opening a new location in the space, he says.

State of Mind opened its Public House and Pizzeria in Los Altos in 2018 and the Slice House in Palo Alto in 2021. The Redwood City location is intended to be more similar in concept to the Los Altos location, with full pizzas (rather than slices) available alongside salads, wings and appetizers. There will also be pinball.

They won't be selling burgers out of support for a neighboring business, though.

"Our buddies at Freewheel do a great burger," Smith says.

In addition, they don't have the room to have as many draft beers available as the Los Altos location, but they are planning to offer a curated canned beer selection, wine and a low-proof cocktail menu.

"We're really excited," Smith says. "We are very thankful for the community that we grew up in coming out to support us the way they have in the last five years."

D. Smith is a registered user.


If you haven't tried the food at their two locations, you're in for a real treat. Everything on their menu is delicious.. AND the people who work there are the best. My grandchildren love it there, as well! I've never had the good fortune of tasting their chicken sandwich because of poor timing. Now I know where to get one anytime. Can't wait for it to open.

Report Objectionable Content
Posted by Wei Zhao, a resident of Adobe-Meadow,
on Sep 22, 2022 at 10:11 am
Wei Zhao is a registered user.


As good as Chick-Fill-A and Round Table Pizza?

Do they offer discount coupons?

Report Objectionable Content
Posted by Mondoman, a resident of Green Acres,
on Sep 22, 2022 at 10:41 am
Mondoman is a registered user.


@Wei
We like Round Table, too. State of Mind is also good, but it's a different type of pizza. We also like how they run their restaurant in Los Altos - not too casual, not too stuffy, and having tables outside is always good. Time to road trip to RC!

Three new restaurants from former Manresa chef David Kinch and his team are coming to Los Gatos
By The Peninsula Foodist | 4 comments | 4,793 views

Doing more with the natural spaces we have
By Sherry Listgarten | 3 comments | 1,486 views