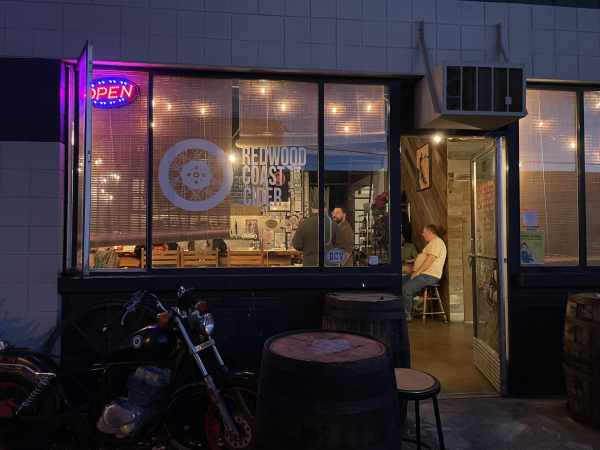 Redwood Coast Cider has announced it plans to close its taproom and its last day will be Oct. 1. (Photo by Magali Gauthier)

Redwood Coast Cider, one of a handful of Peninsula hard cidermakers, has announced its last day for both of its taprooms will be Saturday, Oct. 1.

Established in 2015, the cidermaker has two taprooms, one in San Carlos and the other in downtown San Mateo. A visit to the San Carlos location this week, a cozy cider bar packed with regulars and tucked away in an industrial area of the city, showcased a bittersweet but convivial atmosphere, made more friendly by the fact that a dog named Cody was also greeting visitors who all seemed to know his name.

According to Christina Krzaszczak, owner and manager of the San Carlos location, the decision to close was driven by increasing rents and local development.

The block where the San Mateo taproom is located is the site of a proposed mixed-use development project by the city of San Mateo and three other developers, which would replace the buildings there with a seven-story affordable housing building and a five-story office and retail building.

In addition, while the business was able to financially survive the worst of the COVID-related shutdowns, it emerged with not much left over on the other side of it, Krzaszczak says.

However, consumer habits also changed during the pandemic and haven't bounced back, Krzaszczak noted. "People are not going out the way they were," she says.

"It is with a heavy heart that we formally announce the closing of South City Ciderworks. It has been seven and a half amazing years of learning, friendship, and of course - cider. We are so thankful for all who have been part of the team over the years, keeping the cider flowing, and for those who have supported us," South City Cider owners Jenn and Alex Martell said on Instagram last week. "Though production has come to an end, we are so proud of the products that we have made and the brand that we built."

Silicon Valley’s next meat substitute is being grown at a Morgan Hill mushroom lab
By The Peninsula Foodist | 2 comments | 3,131 views

Our First Anniversary in my Husband’s Retirement
By Chandrama Anderson | 1 comment | 2,048 views