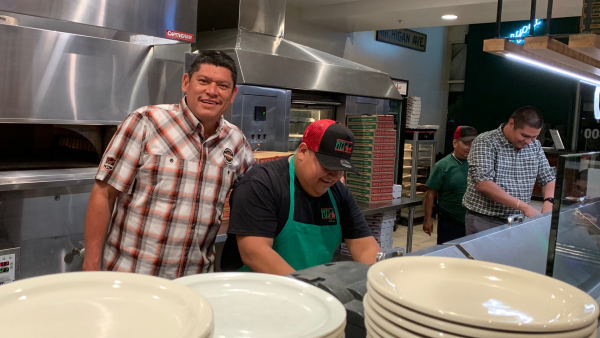 The Pizz'a Chicago team says it's "not ready to quit" and has a plan to downsize to a smaller location to continue. (Courtesy Juan Lorenzo via gofundme.com)

Palo Alto's Pizz'a Chicago, which has been operating in the city for 28 years, is in the process of moving for the second time in four years, according to its owner Juan Lorenzo.

The new location, 3866 El Camino Real, will be smaller and primarily targeted toward takeout customers, he says. To help raise funds to cover moving costs, they've launched a GoFundMe campaign and are seeking community support.

Pizz'a Chicago operated at 4115 El Camino Real in Palo Alto for more than 20 years. About five years ago, the restaurant was displaced when its building passed to a new owner, and it moved to its current location at 2305 El Camino Real near California Avenue.

In December 2019, the restaurant's former home became the site of a "rare and tiny victory" in the battle to provide more housing within city limits as members of the Palo Alto City Council voted to allow seven condos to replace the restaurant.

Lorenzo says that he invested heavily to make his current location thrive. He put in about $750,000 to refurbish it and didn't think he'd ever leave it.

"Everything was going OK until COVID," he says. Ever since, the restaurant has struggled. He got some financial relief from the landlord at first, but now the landlord is pushing for the full rent – which comes in at nearly $20,000 per month, he says.

It's helped some to have nearby Stanford University back in person, but many of the companies where his team used to deliver pizzas are still not back full time to the office. There's been a bump of roughly 10%-15% in the right direction of late, but that's not enough to cover expenses, especially considering that during the same time, food costs went up about 15%.

"For us, the business hasn't really come back," he says.

"This is one of the last ones surviving around here," Lorenzo says.

The new location has to go through the permitting process with the city, which is expensive, he says. It will also require shutting down sit-down operations entirely for about four months while they transition to the new spot. In the meantime, he's hoping the community steps up to support them through deliveries.

Gary Yount is a registered user.


There are way too many independent pizza restaurants around here and it's no wonder the pizza market is oversaturated.

Owning a Round Table or Mountain Mike's franchise ensures success because of product consistency/quality, and overall ambience.

Report Objectionable Content
Posted by Allen Akin, a resident of Professorville,
on Dec 6, 2022 at 11:31 am
Allen Akin is a registered user.


I get takeout there pretty often, so I'm sorry to see them forced to move. Here's hoping the new place will work out. Can't do without my "Great Chicago Fire" fix!

Report Objectionable Content
Posted by krobinson, a resident of South of Midtown,
on Dec 6, 2022 at 11:40 am
krobinson is a registered user.


Ambiance? At Mountain Mike's and Round Table? You must be joking. :-)

Report Objectionable Content
Posted by AC, a resident of Rengstorff Park,
on Dec 6, 2022 at 9:18 pm
AC is a registered user.


At first read, I love that they're hanging in there. And it seems for all the right reasons. I don't go out to pizza much, but I've enjoyed Pizz'a Chicago when I've gone.

Report Objectionable Content
Posted by maryakatiff, a resident of Old Palo Alto,
on Dec 10, 2022 at 10:00 am
maryakatiff is a registered user.


We love Pizza Chicago. Strongly disagree that franchises offer the best ambiance, but to each his own. Additionally, ambiance is not the future of Pizza Chicago according to this informative article. They are moving to a take-out only model.

Report Objectionable Content
Posted by Nayeli, a resident of Midtown,
on Dec 15, 2022 at 2:20 pm
Nayeli is a registered user.


The current location on the corner of El Camino Real and Cambridge Ave is a death spot for restaurants. I just don't get why restaurants move there -- or why the owner charges $20,000/month for a location where NO RESTAURANT SURVIVES.

Over the last decade alone, it's been a Wahoo's Fish Tacos, Freebirds Burritos, Pieology and, now, Pizz'a Chicago. The location just doesn't have much pedestrian foot traffic.

I wish the owners and employees of Pizz'a Chicago the best. I liked the restaurant when it was at its former location. They made a nice and deep Chicago style pizza.

This barbecue business was kicked out of Belmont. Now it's a Sunday fixture in Redwood City.
By The Peninsula Foodist | 2 comments | 4,818 views

Doing more with the natural spaces we have
By Sherry Listgarten | 8 comments | 3,446 views

Can the Memphis police behavior ever happen here?
By Diana Diamond | 31 comments | 1,704 views