Fewer Michelin stars awarded on the Peninsula this year 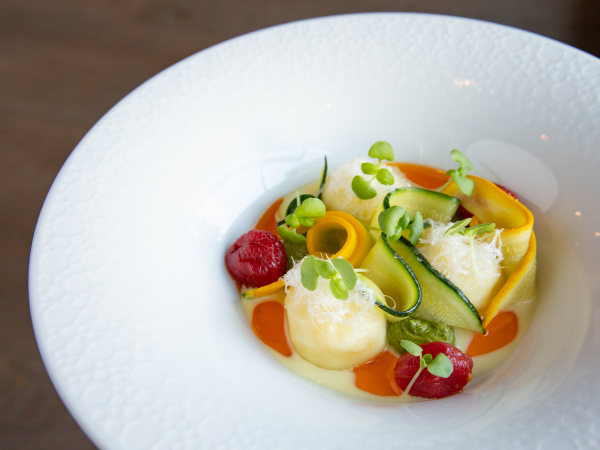 At Monday night's ceremony to reveal the new and returning Michelin-starred restaurants throughout California, there weren't many new surprises as far as the Peninsula was concerned. No Peninsula restaurants received new stars, and two dropped off the list from last year. There were also no new Peninsula additions to Michelin’s "Bib Gourmands" list, restaurants that are recognized for having good quality and value.

Restaurants that receive one star are considered to be "very good" in their category, have quality menus and prepare cuisine to a consistently high standard, according to the Institute of Culinary Education.

Both Madera at the Rosewood Sand Hill in Menlo Park and Rasa in Burlingame (now Saffron) were recognized with one Michelin star in 2021, but dropped off the list this year. In June, Rasa chef and owner Ajay Walia explained in an interview with the Foodist why he was giving up his Michelin star to reopen as a second location of his more casual concept Saffron, citing pandemic pressures such as cost hikes as well as the sentiment that the luxury and demands affiliated with a Michelin-starred restaurant no longer fit.

According to the San Francisco Chronicle, 10 previously starred Bay Area restaurants dropped out of this year’s guide, the highest number in the region since at least 2019.

David Kinch, chef of the Peninsula’s only three-Michelin-star restaurant, Manresa, announced his departure in August, effective at the end of the year, to focus on his more casual-concept eateries. Following Kinch’s decision, Manresa announced last month that it would permanently close Jan. 1. Kinch was honored during Monday’s Michelin awards ceremony, and the Michelin Guide's international director, Gwendal Poullennec, gave him a special salute.

"David, we appreciate your outstanding work and admirable contribution to the industry. We wish you all the best for the next chapter," he said.

Kinch briefly took the microphone to share his optimism about California's culinary future, and to hint that he's not through with the Michelin crowd just yet.

"After three years of COVID and everything everybody's been through, it's very obvious to me that the potential that California offers with its talent, its diversity, (its) quality of ingredients… the future is very, very bright," Kinch told attendees.

"Everybody here should be very, very proud of everything they accomplished, but more importantly what lies ahead. And you haven't seen the last from me yet," he added.

Michelle Longley is a registered user.


Having dined at Stars, Chez Panisse, The French Laundry, CIA, Chez TJ among other highly touted restaurants, a Michelin Star is merely a justification to charge more for less.

You also have to catch the restaurant on a 'good night' when everything is in sync or else you will be disappointed and feeling ripped off.

Report Objectionable Content
Posted by Mac Peterson, a resident of Stanford,
on Dec 7, 2022 at 8:50 am
Mac Peterson is a registered user.


Amazing how countless people live to eat rather than eat to live.

No wonder America is plagued by poor nutrition and obesity.

Report Objectionable Content
Posted by Cale Walker, a resident of Barron Park,
on Dec 7, 2022 at 10:10 am
Cale Walker is a registered user.


I've never understood the concept of paying hundreds of dollars for a multi-course meal comprised of meticulously prepared appetizers on small plates.

Is this what those stars are handed out for? If so, one star or two stars makes no difference.

Report Objectionable Content
Posted by Teresa Garrison, a resident of Downtown North,
on Dec 7, 2022 at 12:48 pm
Teresa Garrison is a registered user.


The only Michelins that matter to us are the four tires on our Infinity.

Report Objectionable Content
Posted by jhskrh, a resident of Community Center,
on Dec 9, 2022 at 9:55 am
jhskrh is a registered user.


The pretentious production involved in dining at a Michelin restaurant is tiresome and ridiculously expensive I remember many years ago before Tasting Menus became a thing, dining at Chez TJ, it was fabulous, I think back then it was maybe 3 courses, possibly a la carte menu, maybe someone can correct me. It was a special experience. Years later we returned to chez TJ with the elaborate tasting menu presented with fanfare at a much higher price not nearly as good. If we want a nice meal out much prefer Le Papillon or Alexanders, no Michelin Star but a nice meal and I can order what I want in a relaxing atmosphere. Also back in late 90's Joey Altman was the Chef at Sunnyvale's Palace nightclub (a restaurant early in the evening). A memorable meal in a beautiful venue (which today is a dump...sad)

Report Objectionable Content
Posted by jhskrh, a resident of Community Center,
on Dec 9, 2022 at 10:17 am
jhskrh is a registered user.


Madera at Rosewood has very mixed reviews, not surprised it was dropped, HOWEVER no mention of ADEGA (which I know is not on the peninsula BUT it is unique; San Jose's first and only Michelin-starred restaurant and also the only Portuguese restaurant in the US to have a Michelin star Located in Little Portugal just off 101 on Alum Rock. Web Link

Report Objectionable Content
Posted by AnnaNonymos, a resident of another community,
on Dec 9, 2022 at 6:32 pm
AnnaNonymos is a registered user.


My $0.02 for anyone looking for a good dinner out--try BottleShop in Redwood City. Their chicken tikka pie isn't on the menu, but it's almost always a special and is melt-in-your-mouth delicious. The bouillabase they had this past summer was probably the most delicious dinner I've had, and I've tried some of the Michelin restaurants in the area.

Report Objectionable Content
Posted by Connor Greenwood, a resident of La Entrada School,
on Dec 19, 2022 at 12:02 am
Connor Greenwood is a registered user.


The professors are all very helpful in explaining concepts to us students. They make sure that you got help from Web Link to understand what they teach and how to get a better understanding of it.

This barbecue business was kicked out of Belmont. Now it's a Sunday fixture in Redwood City.
By The Peninsula Foodist | 2 comments | 4,810 views

Doing more with the natural spaces we have
By Sherry Listgarten | 8 comments | 3,436 views

Can the Memphis police behavior ever happen here?
By Diana Diamond | 31 comments | 1,697 views