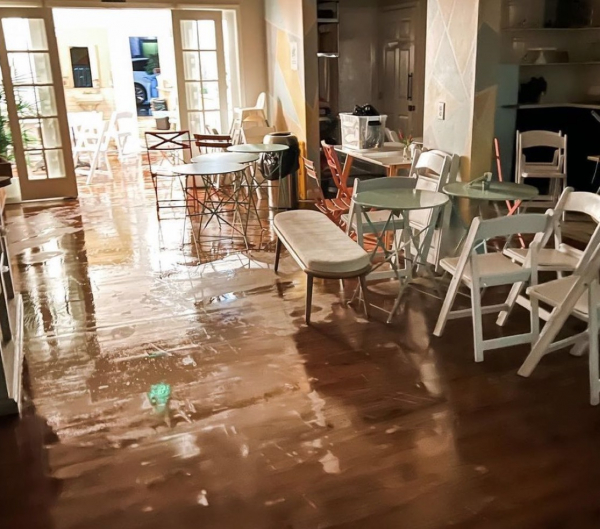 Restaurants around the Peninsula experienced flooding during the wave of storms that hit Dec. 31-Jan. 5, with more rain in the forecast. Here are a few of the eateries that have been impacted so far that we're aware of.

- Mints and Honey in San Carlos is closed until further notice due to flooding. According to an Instagram post, the owners' outdoor planter boxes and garbage bins were transported several blocks away during the flooding. iGuey Taqueria also flooded, the San Mateo Daily Journal reported.

- Devil's Canyon Brewing Company announced it's been hit by severe water damage and will be closed until further notice. "We are disheartened by the fact that storm drain blockages resulted in extreme water damage throughout the entire facility," they said on Instagram. "We aren’t 100% sure of the date we’ll be up and running again, however, we are sure that it will be at least a couple weeks."

-Namesake Cheesecake shared a video of its entire restaurant and back kitchen flooded with several inches of water and announced a temporary closure. According to owner Cherith Spicer, the New Year's Eve storm was the second time the restaurant has flooded. The last time, it cost about $20,000 to remodel and repair everything. This time around, her friends and family have come in to support her and spent time lifting furniture, vacuuming the shop and preparing for the next storm. She says she was told to prepare for more flooding due to a broken city pump.

- The Village Bakery in Woodside was flooded with several feet of water on Dec. 31 when a creek behind the property overflowed. Staff worked to clear out the water and debris, and the restaurant opened for the next day's brunch service, according to spokesperson Karey Walker.

-More than 60 Bay Area food trucks were stranded due to flooding on Shaw Road in South San Francisco, SFGATE reported. That's where Mobile Foods is located, which offers monthly parking for food trucks.

Due to additional storm impacts like power outages, other establishments have also closed temporarily. Pie Ranch’s farm stand is closed through Jan. 11, and Half Moon Bay Brewing Company and Mezza Luna Restaurant were closed Jan. 5 because of power outages.

Marilyn Pierce is a registered user.


Though indoor dining might be restricted due to the wet floors, there is minimal reason that these restaurants cannot offer take-out services or Door Dash deliveries if they wish to remain in business.

My great-great grandfather was a baker during the Jonestown Flood and he continued to turn out product to feed the hungry.

Report Objectionable Content
Posted by Katy, a resident of Barron Park,
on Jan 16, 2023 at 12:38 pm
Katy is a registered user.


I sincerely hope these businesses are able to be up and running soon. It seems a broken city pump would mean that the city is responsible for damages.

As for Marilyn's comment it over simplifies the situation. With flood waters come contaminants and debris. While it may have worked for her great-great-grandfather, there were probably not the health codes in place back in his day to protect the public from potential health hazards.

This barbecue business was kicked out of Belmont. Now it's a Sunday fixture in Redwood City.
By The Peninsula Foodist | 2 comments | 4,819 views

Doing more with the natural spaces we have
By Sherry Listgarten | 8 comments | 3,447 views

Can the Memphis police behavior ever happen here?
By Diana Diamond | 31 comments | 1,704 views