Favorite Fiction and Television Storytelling of 2013

UNESCO reported that there were 292,037 books published in the United States in 2011. With the rise of self-publishing and an increasing number of small presses, no doubt there were many more books published this year. Although I wrote an alternative best books list last year, it is starting to seem to me somewhat absurd to think of the books you love in terms of "best," so I'm limiting myself to favorite stories. My favorites are all concerned with ideas ?all are entry points into the world; none are pure 'escapes.'

Also, I have become convinced that television is where some of the most relevant and interesting storytelling (and writing) is happening. Consistently, television proves itself to me a more pleasurable medium than film for exploring the lives of characters in full.

The following are favorites culled out of a reading list of a little over 100 books read (or partially read and abandoned for lack of affinity) in the past year, as well as an embarrassing television habit. 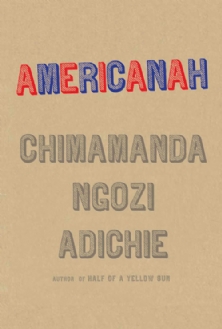 There are some books that feel like a gift, like they were written for you because they say all the things you've been wanting to talk about, but never get a chance to in polite society. It's especially thrilling to find these books when you're approaching middle age and starting to wonder if the stuff that interests you will ever be talked about publicly in your lifetime. Americanah is one such book for me.

Chimamanda Ngozi Adichie is a well-known literary Nigerian author who was recently catapulted into even wider fame when Beyonce sampled her TED talk on "why we should all be feminists" on her latest album. Americanah is a knockout, the story of two Nigerians, Ifemelu and Obinze, who fall in love in high school, but proceed down different paths. Obinze goes for a short time to England before returning to Nigeria, getting married and having a child. Ifemelu goes to school in America where she learns what it means to be a black person in America today. She becomes a popular blogger about race, talking about everything from Obama's election to hair. Her thoughtful and sometimes blunt observations about our world are just one of many reasons this beautiful novel is my favorite novel of 2013. 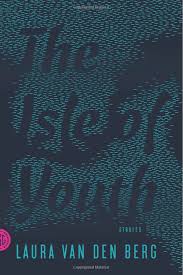 The Isle of Youth by Laura van den Berg

This year has been outstanding for short story collections by women authors. The story collection that most spoke to me was Laura van den Berg's dark, hypnotic and slightly magical collection The Isle of Youth . These are noirish stories of quiet, troubled women who must puzzle out events from the past. They are detective stories, but as van den Berg explained in an interview, they are existential detective stories.

Every story in the collection is told in beautiful, spare and suspenseful prose. In "Acrobats," a woman is so enthralled by acrobats in Paris, she misses what her husband says to her right before he leaves her. "Lessons" tells a devastating story about a gang of cousins who wear gorilla masks during holdups. In another brilliant story, "Antarctica," a woman goes to Antarctica, ostensibly to investigate the death of her brother, but also to make sense of his missing wife's past. The epigraph to the collection by Yoko Tawada gives a good feel for the tone of the collection: "I felt I was playing a part in a movie with a plot unknown to me." 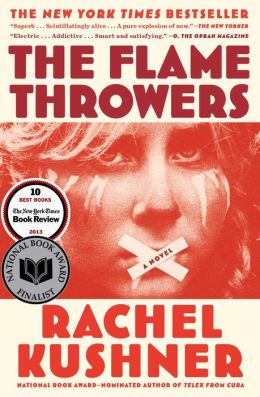 The Flamethrowers by Rachel Kushner

The Flamethrowers by Rachel Kushner burns so brightly ? is so expansive and fascinating ? it is not hard to see why so many critics have fallen in love with it. Although it tells many stories, the novel belongs most clearly to Reno, a young motorcyclist whose passion and mastery of racing yield to risk-taking in art and love. She joins the 1970's art scene in New York where she becomes the lover of a much-older Italian minimalist sculptor Sandro Valera. During a trip to Italy, she is betrayed and falls in with the Italian underground.

As my husband (a minimalist) noted: This is not a novel for minimalists. But the prose! You haven't lived if you haven't read prose this good. 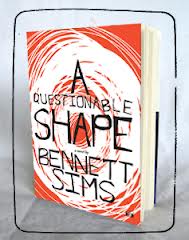 A Questionable Shape by Bennett Sims

A Questionable Shape, published by the great press Two Dollar Radio, is a footnoted philosophical zombie novel that takes place in the near future. It's absolutely brilliant, calling to mind most obviously David Foster Wallace and Thomas Bernhard. The narrator is Mike Vermaelen, a young man recruited by his friend Matt Mazoch to find Mazoch's missing father. In the universe of the novel, there are quarantine camps for zombies and a survival handbook called "Fight the Bite" with tips on how to defamiliarize oneself from loved ones that have turned into zombies looking for the familiar. But there is no horror here ? this is a quest for meaning, an exploration of memory, a debut author's erudite rumination on loss and what makes us human.

The most riveting episode of television about law firm life that I've ever seen was this year's episode "Hitting the Fan" on The Good Wife. Actually it's probably one of the most enjoyable episodes of television ever. Fans knew for a while before the episode that Alicia planned to leave with her first-season rival Cary Agos to form a new firm. But the first few episodes of the season were full of just the right number of twists to make us question whether it was really going to happen and how. Nothing quite prepared the audience for the speed, intensity and storytelling chops of this episode in which Will Gardner finds out about Alicia's betrayal and all the characters are scrambling. The Good Wife is reliably good television (notwithstanding several very weak storylines last year). Although it's in its fifth season, if you haven't been watching, you can catch up for free with Amazon Prime.

Orange is the New Black

Frankly, I was skeptical when I heard about Netflix's streaming television series Orange is the New Black. I liked Larry Smith's two NYT Modern Love columns about his relationship with Piper Chapman, a white woman incarcerated for smuggling drug money. But I wasn't sure this story would stand up as an entire series. Not to mention, as someone who has worked with prisoners, I was bothered by the idea of an affluent white woman's prison narrative getting its own television show, while millions of poor people of color are incarcerated with nearly zero attention to their individual stories.

Luckily, I was wrong. The show turned out to be funny, touching and so involving that I binge-watched it shortly after it became available. Each episode focuses on the backstory of a different prisoner as well as some aspect of prison life. Piper Kerman's story provides a frame that becomes especially clear in the final episode, but the show's strength lies in its ensemble nature. There is some especially fine acting by Laura Prepon and Uzo Aduba.

Other Fantastic 2013 Books I Strongly Recommend

What 2013 books, television, movies or other storytelling did you feel strongly about? Share your recommendations below. Happy New Year!