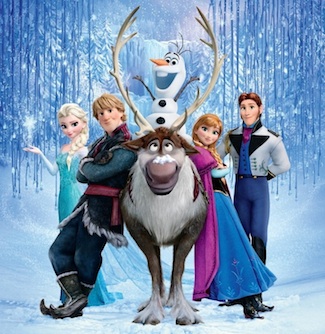 In the last few months dealing with multiple bouts of the worst flu ever, we've been watching a lot of family-friendly animated movies on the Disney Channel, Netflix and Amazon Prime. My daughter is a toddler so most of the time, we do other things while the movie plays in the background. We started with classics from my childhood and moved forward in time: Cinderella, The Fox and the Hound, Peter Pan, The Rescuers and The Little Mermaid. Later Shrek and Tangled. As we watched, it become plain to me just how unfriendly to women and people of color so many of the movies, even some recent ones, are. Slim pickings for progressives.

I'd forgotten, for example, about the scene in Peter Pan in which Peter tells Wendy that girls talk too much and the scene in which Native Americans sing a song about "What makes the red man red." I'd forgotten about why the mouse Bernard accompanies fellow mouse-rescuer Bianca on her quest to save Penny in The Rescuers. I hadn't remembered just how dark Ursula in The Little Mermaid is.

When I heard about the feminist controversy over Frozen, I was too curious not to go see the movie (a month late because I was working on the release of my own children's book). I skipped the spoilers because I like being surprised, but I got the gist.

Some writers complained about Disney's continuing princess culture. Others praised the movie as the first feminist Disney picture ever. Others were bothered by a dumb claim by a Disney animator. Others complained about the butchering of Hans Christian Anderson's gorgeous fairy tale The Snow Queen, the source material for Frozen.

The Snow Queen is one of my favorites ? it's so bizarre and delightful, and so pro-female. It starts with the story of an evil troll's magic mirror, which distorts the person who is being reflected for the worse. The mirror shatters and bits of it become lodged in people's hearts. One shard pierces the heart of a little boy. When the boy is abducted, his devoted playmate Kai (a girl) must save him. Frozen has only elements (snow, trolls and a snow queen) in common with The Snow Queen, but I still enjoyed it quite a bit.

For those who haven't seen it, a brief recap: Frozen tells the story of Elsa and Anna, Scandinavian princess sisters who are close as children. Elsa has magic powers she can't control. After she accidentally hurts Anna, must grow up in isolation in her room. At Elsa's coronation as queen, she and Anna get into a fight over Anna's desire to marry a prince she just met. Without giving away too much, the movie tweaks the boy-saves-girl formulas that have become the standard plot for all the Disney princess movies.

In Frozen, both princesses are clearly independent, strong-willed, capable, and smart. Just as I thought the movie was about to veer off into boy-saves-helpless-princess territory, the movie resolved another way ? the way I had hoped it would. It was both moving and fun, and I'm excited to show it to my daughter when it is available to stream.

But is Frozen the first feminist Disney movie? Perhaps it's more accurate to call it a step in the right direction of the first feminist princess Disney movie. With Elsa's costuming in the sequence for the song "Let It Go," it still plays somewhat into the usual good girl, bad girl (Madonna/whore) binary that Disney trots out in everything from The Little Mermaid to The Rescuers. Disney villainesses are always strikingly, disturbingly sexual and antisocial, while a warm, wholesome nonsexual girl is a heroine. Frozen doesn't exactly value Elsa's individualism, though it does celebrate Anna's strength and the bonds of sisterhood. And by transforming the Anderson fairy tale so much, Disney removed several (potentially diverse) female characters.

Both Mulan (1998) or Lilo and Stitch (2002) are better candidates for the first feminist Disney movie, in my opinion. The latter in particular is remarkable. It's almost entirely about two Hawaiian sisters and familial love, not playing with boy-saves-girl formulas the way Frozen does. It subverts gender stereotypes. It features two girls that don't conform to a Barbie ideal of beauty. Of course, Stitch saves Lilo from an alien abduction, but it's clear that by taking him in, she saves him just as much.

What did you think of Frozen? Any recommendations for good, progressive kids' movies?