﻿ Is "Her" a Response to "Lost in Translation"? | Off Hours | Anita Felicelli | Mountain View Online |
Include Photos | Include Comments | Print this page | Close Window

Is "Her" a Response to "Lost in Translation"?

Note: In more straightforward reviews, I avoid spoiling potential viewers. However, this particular post contains spoilers. It is intended for people who either don't mind spoilers or have already seen the movies mentioned in the title. If you haven't seen her, it's really good - go see it! 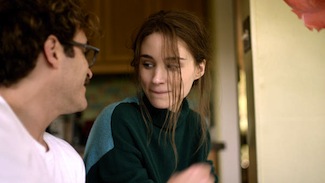 As we walked out of Spike Jonze's Her, my husband Steven posited an interesting theory: Her is Jonze's answer to Sofia Coppola's Lost in Translation.

"Why do you think that?" I asked, not seeing a connection.

Steven explained he thinks that Her's protagonist Theodore Twombly is a stand-in for Jonze, Twombly's estranged wife Catherine is Coppola, and the OS in Her is actually a metaphor for Jonze's career. When Twombly apologizes to his ex-wife in Her, Jonze is actually apologizing to Coppola for focusing more on his work than her. Jonze and Coppola 'grew up' together before marrying and their ideas seem to have influenced each other's artistic development, just as Twombly describes his relationship to Catherine in Her.

I was intrigued by the theory and decided to investigate to see how well Steven's hypothesis stands up. I watched Lost in Translation again a few nights ago. It was as I remembered: slightly boring, but beautifully shot and surprisingly moving in the final scene.

If, like me, you weren't paying attention to film-related gossip in 2003 - Giovanni Ribisi's character John in Lost in Translation, a photographer working on a job in Japan, was rumored to have been based on Coppola's first husband Jonze. Several critics suggested Coppola was writing about her problems with Jonze. Coppola vehemently denied any connection at the time, but in 2013 she said she was trying to figure out her marriage to Jonze while writing the script.

Right off the bat, Her nearly asks us to consider it in connection with Lost in Translation. Scarlett Johansson is a love interest in both movies, though in Lost in Translation, she appears to be a stand-in for Coppola and in Her, she's the OS.

John is a minor character in Coppola's movie. But he clearly fuels Charlotte's sense of alienation. He is neglectful, critical, and always more focused on work; he has no time or emotional energy for a real relationship with Charlotte.

One substantive parallel in support of Steven's theory was interesting enough to share. In one scene in Lost in Translation, John and Charlotte run into an actress played by Anna Faris. She's registered under the fake name Evelyn Waugh and is the stereotypical young shallow starlet that some people assume is typical of Los Angeles. Charlotte points out that Evelyn Waugh was male, and John chastises her, "Why do you have to point out how stupid everyone is?" In almost every scene, John wants to make other people comfortable at Charlotte's expense.

In Her, Twombly's estranged wife Catherine overturns the audience's sense of Twombly as a sensitive guy. She criticizes him as someone who is not able to give enough of himself to a relationship. She says he wanted her to be a typical Los Angeles wife. I found this a fascinatingly realistic argument (vaguely reminding me of the realism of Before Midnight). It also felt like a scene that emerged out of nowhere, unless it's interpreted in connection with Lost in Translation, rather than what happens earlier in Her.

Up to that point, we've been seeing the romance between Twombly and the OS through Twombly's eyes. Twombly comes across as Mr. Sensitive. In a conversation with a video game character, he explains that boys cry, too. He tries to be kind to a desperate woman on a blind date. But in the scene with Catherine, we suddenly see Twombly through Catherine's eyes. Her bitter claims about his character are just what we would expect Coppola's Charlotte to say to John a couple years after Lost in Translation.

Walking out of the theater, Her struck me mostly as a brilliantly made cognitive science thought experiment. Unlike most critics, I thought the first half was a creative delight, but the second half was as banal as many ordinary relationships (perhaps Jonze's intention, but still). The film gained greater emotional resonance when I considered Steven's alternative interpretation.

Whether or not parallels were intended, Her and Lost in Translation are particularly interesting interpreted in tandem. I think it's worth noting that creative works like movies have a life of their own. Writers and directors may not intend a particular interpretation, but the words and images still call up the interpretation on their own.

I have been trying to think of creative works that seem to serve as a call and response to each other or real life. There is F. Scott Fitzgerald's Tender is the Night read next to Zelda Fitzgerald's Save Me the Waltz. Steven brought up poet Robert Lowell's "Skunk Hour" as a prosodic response to poet Elizabeth Bishop's "The Armadillo." Can you think of any other examples?