Is HBO's Silicon Valley Any Good? 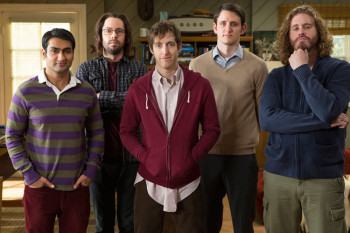 HBO's new show Silicon Valley opens with has-been Kid Rock playing for a badly attended corporate gala where nobody is listening to him. He finally gives up with an "F these people." The show goes on to focus on a group of guys?Richard, Dinesh, Big Head, Gilfoyle and Erlich? complaining about the mediocrity of a product that has achieved success and their own inability to secure a share of the money that's floating around the Valley. The guys are residents at Erlich's incubator where they can stay rent-free so long as Erlich gets 10% of what ever they create there.

After hours, Richard has coded something called Pied Piper, which he originally described as the "Google of music." Erlich complains that Pied Piper doesn't seem to be going anywhere. During the day Richard works for a company called Hooli, which seems to be modeled after Google and maybe Facebook as well.

The day after the party, Richard goes to a TED talk by billionaire Peter Gregory and listens to a talk about how Silicon Valley is a cradle of innovation because various brilliant visionaries dropped out of college. Afterward, Richard pitches the speaker on Pied Piper. The speaker leaves, but his assistant asks him to send her a link to the project.

Unsure of which offer to accept, Richard develops a panic attack and goes to the doctor. In one of the funniest pieces of satire in the first episode, the doctor asks Richard to give him a call if he decides to accept the $10 million bid from the Hooli CEO. The doctor is developing an app, too.

The show is amusing the way that Mike Judge's Office Space was amusing. It also feels a little bit like something Po Bronson might have written a decade ago, even though the technology is current. Elon Musk, the CEO of Tesla, made mention of how HBO's Silicon Valley misses the Burning Man vibe of the real Silicon Valley. He tweeted, "The ‪@MikeJudge show about Silicon Valley missed the mark in some ways, but I didn't hate it, as ‪@Recode reporter claimed."

When I read the reports on Musk's reaction, I was curious as to whether that Burning Man vibe was entirely missing or whether it was simply portrayed in a way that Musk didn't like. (I assumed the latter?most people who are satirized don't enjoy it and find something to complain about.) When I watched the show, however, I realized I agree with Musk that HBO's Silicon Valley misses the mark in the first episode.

What are missing from the show are the unusual and alternative viewpoints that are so common here. Plus?tech companies in Silicon Valley could certainly use more women, but the show is so wholly lacking in women characters it doesn't feel recognizable.

The show's pacing and humor are enjoyable. But it is not a satire of Silicon Valley as it actually exists. It feels like satire of tech as conceived by a college student (or Beavis and Butthead), rather than something truly original and biting. A first episode doesn't always signal the trajectory of a show, however, especially when the genre is comedy. We will have to see if this much-hyped show does anything more than satirize the surface perceptions outsiders?journalists and Hollywood?have of Silicon Valley culture.

If you saw it, what do you think of the show?