The wait is over: Oren's Hummus, famed for its fresh, direct-from-Israel hummus, flavorful meat skewers and stuffed-to-the-gill pita sandwiches, will be opening on Castro Street in downtown Mountain View on Monday, July 14.

Fans of the restaurant on University Avenue in Palo Alto will get a lot of the same food-wise, plus a food new options served faster and in a much larger space.

With high ceilings and double the seating ? Castro Street has 60 seats inside, plus 40 seats on a small outdoor patio along the downtown thoroughfare, compared to Univeristy Avenue's 50 total -- the space at 126 Castro St. will make diners used to the Palo Alto location feel like they can finally breathe while they rip, scoop and eat (the Israeli eatery's tagline, featured prominently with instructional images on the wall in both locations). 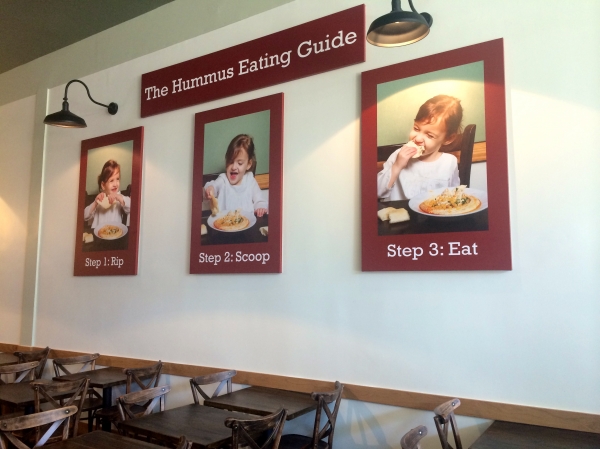 To cut down on wait time, Mountain View will also be counter service rather than sit-down. There is also an area designated for take-out orders, which make up 36 to 38 percent of Oren's business, said co-owner Mistie Cohen. A small flat-screen TV has been installed above a grab-and-go case near the ordering counter where to-go customers' names will appear when their order is ready.

"Quick-casual service is the way we're referring to it," Cohen said Wednesday, adding they're conscious of the fact that many Oren's patrons are coming in to grab something to eat before getting back to work quickly.

"We've taken that model of -- we have a lot of dine in, but we have a huge rapport with some of the people who want to do it to go."

"The egg gives it a little bit of thickness and the caramelized onion makes it really sweet and then you punch it with spices," said chef David Cohen. "We have a couple secret spices that we use for our skewer and our kebab and now for this." (Pssst: The spices, like all Oren's garbanzos, are also imported straight from Israeli.)

To top it all off, this new location won't be the company's last. Mistie said they're looking at opening two more locations in the next year and have checked out spaces in San Francisco and Cupertino. Stay tuned.