Part of the hub will be a Blue Bottle café, open to the public, inside the former Borders space at 456 University Ave.

The hub itself has been dubbed HanaHaus (presumably a techie reference to SAP's HANA technology, an in-memory data platform for real-time analytics and applications). A project application submitted last month described HanaHaus as a ""living laboratory that will explore innovations in the future of work, where dramatic changes in workplace technology, social demographics, cultural trends and globalization are fundamentally changing the meaning, manner and the places in which people work, play, create, connect and relax." 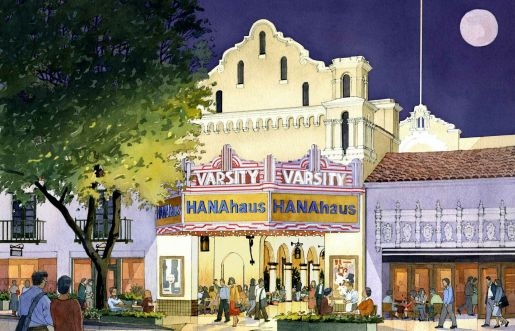 Above: A rendering of HanaHaus, courtesy City of Palo Alto.

"Blue Bottle Coffee is very excited to be starting with a project as unique and innovative as HanaHaus ? one that both salutes, and tinkers with, traditional café culture," a statement reads.

Third-wave coffee pioneer Blue Bottle, which got its start in Oakland in 2002 and now operates more than 10 locations in the Bay Area and on the East Coast, announced in October 2013 that the company would be opening across from the downtown Palo Alto Caltrain at new development Lytton Gateway. Last month, the company said it had decided against moving forward with that space, but would not say why.

Palo Alto's Historic Resources Board met at 8 a.m. Wednesday morning (Aug. 6) to review the HanaHaus project and gave its unanimous thumbs up.