Off the Grid launches in Mountain View

King of the Bay Area food truck market empire, Off the Grid, is continuing its conquering of the Peninsula with a new Mountain View market, opening at the Computer History Museum next weekend.

Starting Friday, May 8, the Computer History Museum at 1401 Shoreline Blvd. will open its doors after hours on Friday evenings for what Off the Grid calls "the coolest block party in Silicon Valley." This is the product of a partnership between the two organizations that actually began back in 2013.

There will, of course, be a rotating lineup of 10 food trucks, plus live music and special programming for visitors of all ages, Off the Grid said in a press release. The trucks will include O Mi Ninja, Cluck It Up, 3-3-3, Los Tolucas, Porky's SJ, 3 Brothers Kitchen, Judie's Locos Tacos, Seoulful Fried Chicken, J Shack, SAJJ Street Eats, Road Dogs, Cheese Gone Wild, Cookies & Cream and Swifty Sweets.

The new market will run every Friday from 5 to 9 p.m.

The Computer History Museum market will be Off the Grid's 43rd market, joining others throughout San Francisco, the East Bay and up and down the Peninsula. It follows two others recently launched nearby: Menlo Park last February and Palo Alto this year. 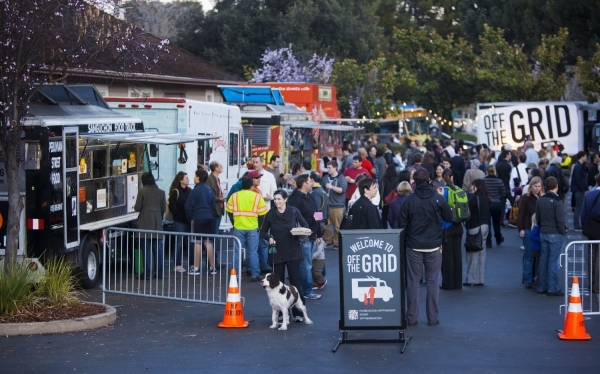 The opening night of Off the Grid's food-truck gathering at the Menlo Park Caltrain station parking lot on February 19, 2014. Photo by Michelle Le/The Almanac.