My new car starts when I push a button. If the car key is with me, I can get into my car, drive and lock it. The car stereo plays podcasts, playlists or albums from my untouched iPhone, connected by wirelessly with Bluetooth. It’s annoying that I cannot unlock the door unlock automatically when I arrive home and must delve in my bag for an old-fashioned key.

Back of Bolt (Photo Source: Apigy)

So, at Stanford’s recent Cool Product Expo, I was delighted to spy Apigy’s Lockitron Bolt. The third generation Bolt is a wireless door lock that has just started shipping for $99. A smartphone app using low power Bluetooth unlocks a door in three different ways, depending on your preference. First, it can unlock it when you are near. Secondly, you can tap your buzzing phone to unlock the door. Thirdly, you can stroke a notification message that pops up on your phone screen when you reach the home. A Bridge module to add WiFi is planned so doors can be opened remotely. 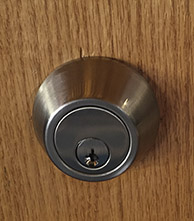 The Bolt can replace the back and front of some common through-hole/cylindrical deadbolts. You can take the cylinder to a locksmith so that it fits an existing key. It won’t work if all you have is a thumb twisting knob on the back of your lock. It will not work with mortise locks that have a handle with a keyhole above it. Also it doesn’t easily work with rim deadbolts – the solution is to drill another hole in the door and fit the Bolt as a second lock. Metal doors might cause problems too. The company provides a printable template to see if the lock will fit your door.

Cameron Robertson (@ccamrobertson) and Paul Gerhardt (@pmg) co-founded Apigy (registered in CA in 2011). Apigy has been angel-financed and crowd-funded to just over $2M, according to Crunchbase. It is located at 1063 El Camino Real near Shoreline Boulevard. Cameron told me that this building was where 50 Apple 1s, Apple’s first product, were sold. It was the first Byte Shop, founded by Paul Terrell, who was one of the first computer retailers. He started the store on December 8th 1975 and then created a small chain of stores. 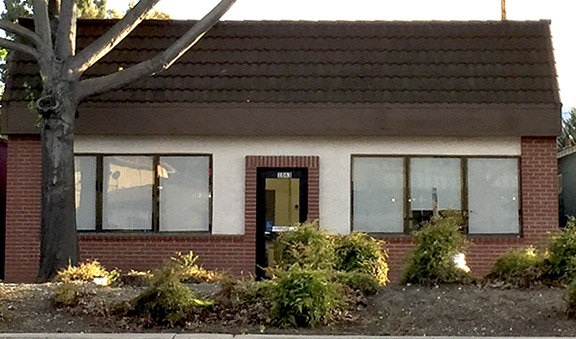 The Bolt has better-financed competitors. For example, August, a San Francisco company that raised over $50M, offers the August Smart Lock. August Home just issued the results of surveying 1,293 consumers with Xfinity Home. They estimate that 15 million homes currently have smart technology and they expect another 15 million to add smart home capabilities in the next 12 months. However, smart locks were not the highest priority. They found that 13% would be likely to choose a smart lock, compared with 40% wanting a connected camera and 26% wanting a video doorbell to see who is at the door. Over 60% think that family safety is the reason they’d move to smart technology, with 54% liking the convenience factor.

Mountain View needs to remember its historic buildings. William Shockley’s former semiconductor laboratory at 391 San Antonio Road is now a building site. A sign is all that is left. Given the changing buildings on El Camino, should there be a similar sign outside Apigy’s historic building?