The Post to bring comfort food, cocktails to Los Altos

The Post, a new restaurant opening on Main Street in downtown Los Altos, will serve "comfort food you can feel good about," owner Vickie Breslin said in an interview.

Breslin previously ran events for First & Main and has worked at other local establishments, like Palo Alto sports bar The Old Pro. She hopes The Post will be a restaurant with a strong "community feel," serving locally sourced, sustainable and approachable food. It will be family friendly, she said.

Breslin grew up on the Peninsula and now lives in Redwood City.

Breslin has been consulting with a local chef (she declined to say who) on the menu, which will be "ingredient focused," she said. She said she's "(made) a point to spend a good amount of time in Los Altos to learn what the community wants to see in their town" food-wise. She's also reached out to former customers of First & Main to seek their feedback.

The Post will also serve craft cocktails, wine and beer.

The restaurant's name draws from the history of the Main Street building it's housed in, known as the Copeland Building. The historic building, which is on the list of Los Altos Historic Landmarks, originally housed the city's post office, Breslin said. The two-story Copeland Building was built in 1911 and throughout the years was also a drugstore, bakery and theater, according to this City of Los Altos walking tour brochure.

Breslin is completely remodeling the two Main Street spaces — "we're down to the studs right now," she said. 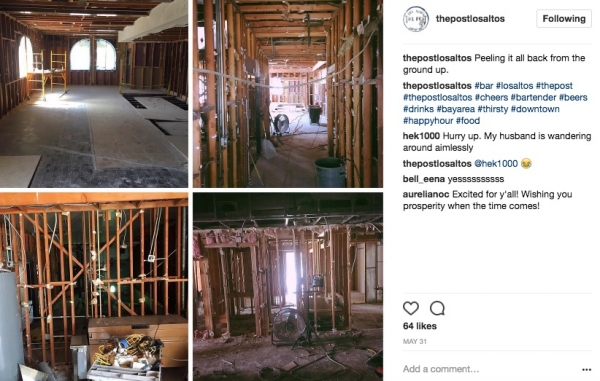 A view of the in-progress interior at The Post in Los Altos, posted on the restaurant's Instagram page.

Combined, the spaces total about 5,000 square feet. The Post will be able to accommodate large parties and corporate events.

She said she's aiming to open The Post this fall.