It started 12 years ago, when California Pizza Kitchen opened at Stanford Shopping Center.

Then came Yucca De Lac and The Melt. And in the last two years alone, more than five eateries opened in a renovated wing on the El Camino Real side of the Palo Alto shopping center, with several more slated to open this year.

Dennis Berkowitz, the owner of the longtime Max’s Opera Cafe, said he lost about $300,000 in revenue a year after the first three restaurants opened but was still making a profit. The latest influx of dining options, however, put the final nail in the coffin: a 20 percent drop the first year the remodel was done and an additional 20 percent the following year.

"I thought … maybe it will drop and come back," he said in an interview Monday, sitting outside his 30-year-old restaurant. "It didn't come back."

Max's will close its doors at the end of business this Saturday, June 30. 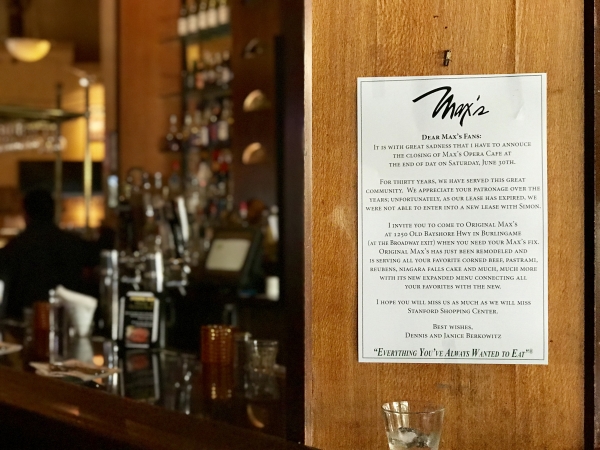 Berkowitz's lease ended in March. He went month-to-month while he tried to renegotiate with Simon Property Group, which owns the shopping center. He said the company decided against his proposal to split the large restaurant in half, lease one side to a new tenant and allow him to stay with a more affordable rent. His rent has steadily risen to more than $100 per square foot, with a monthly payment of about $50,000.

"Even though we're barely breaking even, in my mind it's not worth it to continue because more bad things are going to happen than good," Berkowitz said. "I want to leave with some dignity."

Simon Property Group did not immediately respond to a request for comment.

Berkowitz lamented the changing nature of the shopping center. Stanford’s original landlord and director, Rosemary McAndrews, envisioned a "street market" populated by local vendors, including Max's, the market that predated Sigonas Farmers Market, a cafe and Schaub’s Meat Fish & Poultry, among other businesses. 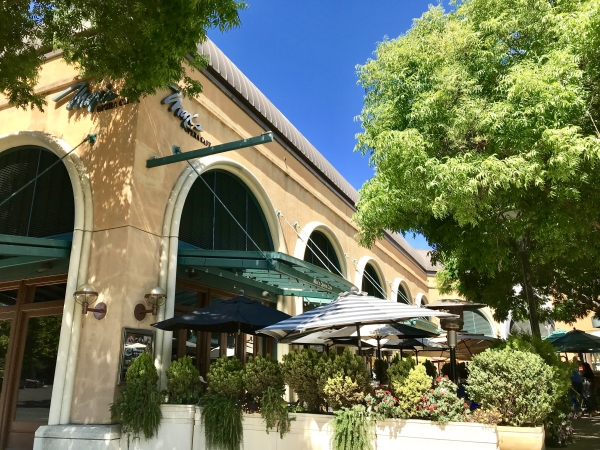 The exterior of Max's Opera Cafe in Palo Alto. Photo by Elena Kadvany.

Simon Property Group purchased the open-air mall in 2003 for $333 million. The company embarked on a significant revitalization of the shopping center in recent years and brought in new tenants, many of them larger food and beverage chains, from True Food Kitchen and Tender Greens to the forthcoming Shake Shack this year.

Pacific Catch, a small Bay Area seafood chain, will take over the Max's space, according to Berkowitz.

Rising rent and increasing competition — not just at the mall, but more widely in Palo Alto — has made it more difficult for a mid-range restaurant like Max's to survive, Berkowitz said.

The first Max's opened in Serramonte in 1978. In 1984, Berkowitz opened a Burlingame location, which he recently remodeled and said is doing well. Franchisees operate three Max's restaurants in Redwood City, San Francisco and Auburn.

Berkowitz also owns The Vault 164 in San Mateo, two restaurants at San Francisco International Airport and does food manufacturing for the airport and other local restaurants.

Max's has long been known for its singing servers, corned beef and pastrami sandwiches and large slices of cake. The restaurant’s tagline is "everything you've always wanted to eat."

"We had 30 years. The last two years have been difficult. Twenty-eight out of 30 -- that gets you in the hall of fame," he said. "I'm still standing, right?"