Just got back from sweet aloha on the Big Island. Visited mi amigo Jungle John - farmer of lemons, oranges, lychee, and soon, Kona coffee, which I must report it is worth all $25 per pound, the minimum one pays these days for 100% Kona-grown. Smooth in texture, and not bitter in taste, cups do not even need cream. Lucky us, we got to stay on a farm with a guy who grows it, and snuggle up next to hot mugs of his black velvet each morning.

Bob’s coffee and fruit orchard is on the west or “dry side” of the island, overlooking Two-Step, the snorkeling hot spot. Take a bumpy, dirt road far up the hill past trees of papaya and bushes of wild coffee, to a tropical paradise you may never leave. That’s what happened to Bob. Actually, it’s a story you hear quite often from locals. “Not really knowing where I was headed, I sailed from the mainland in the 1950’s, and landed on the Big Island,” Bob recants. “The ‘aina * took hold, and sent me here to start this farm. I never went back.” 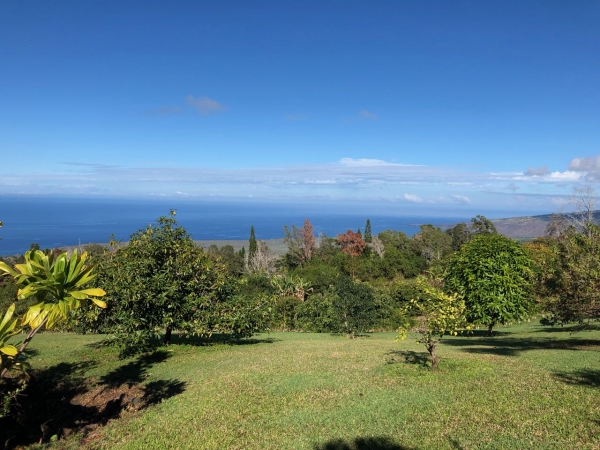 Bob planted over 100 types of exotic, fruit-bearing trees across 10 acres, and 50 years. Add in the island's over-abundance of sun and water, and the ‘aina brings forth a fertile bounty of unusual and voluptuous fruits that gush, ooze, make your lips all sticky, 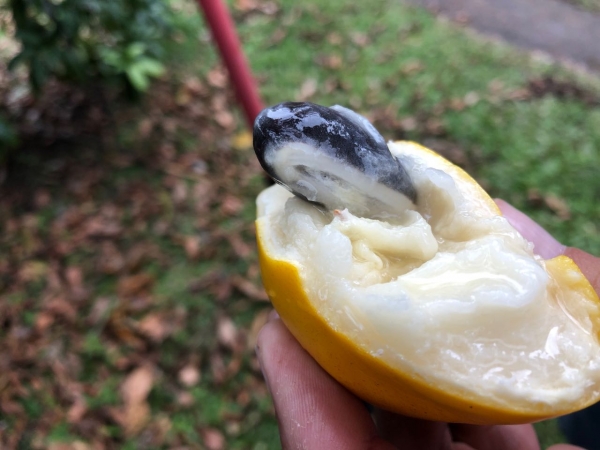 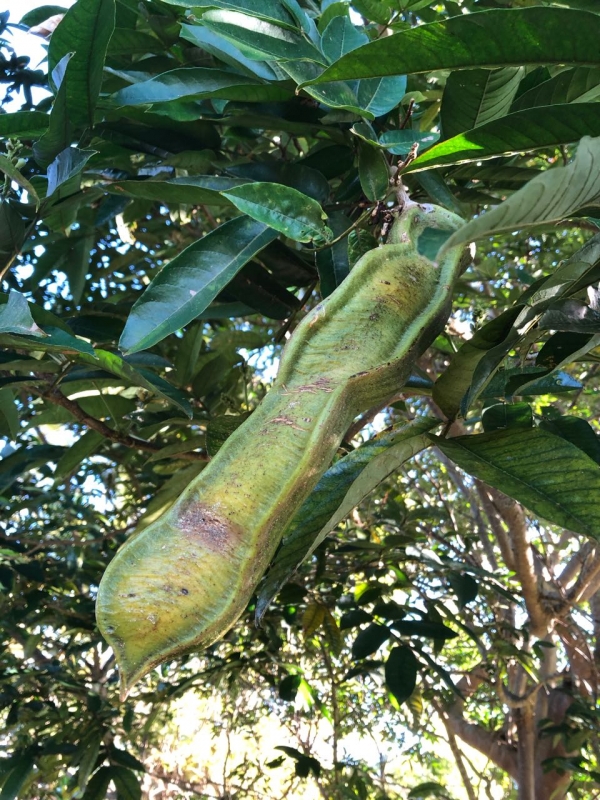 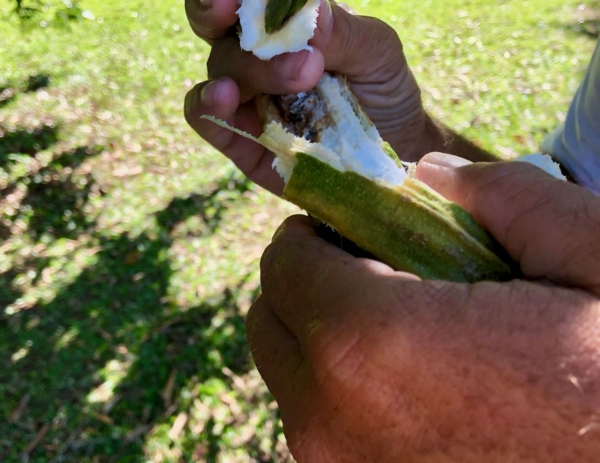 and overflow with mouthfuls of yum. 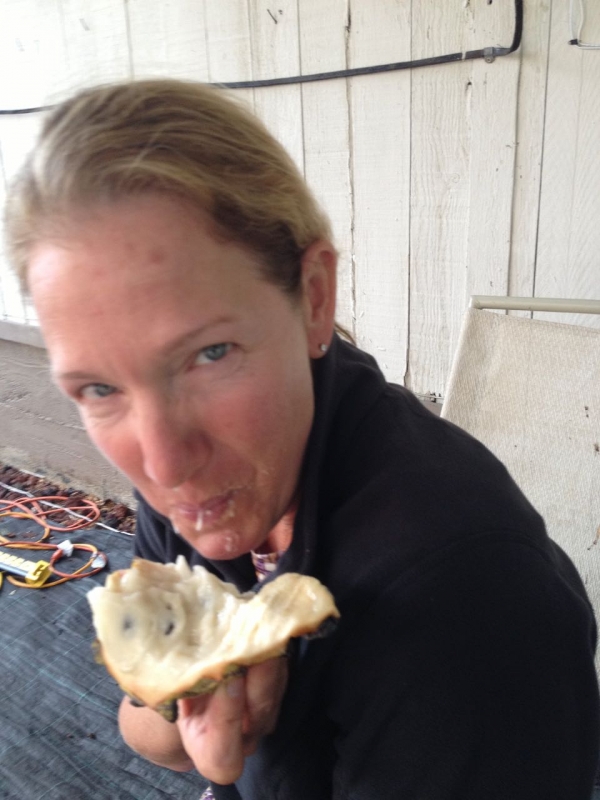 Coffee is Bob’s main crop, but he grows plenty of citrus and avocados too.

Hawaii produces a vast selection of both, 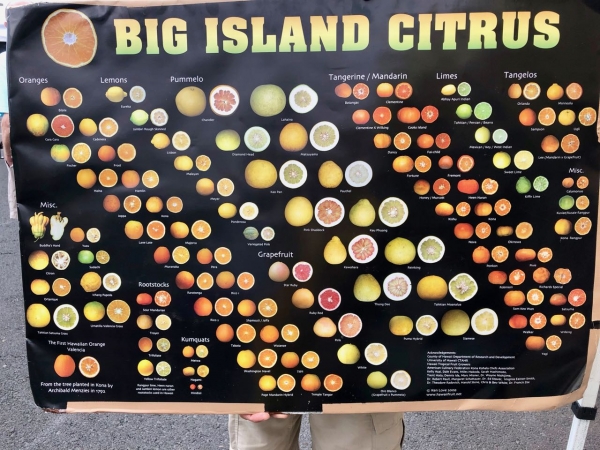 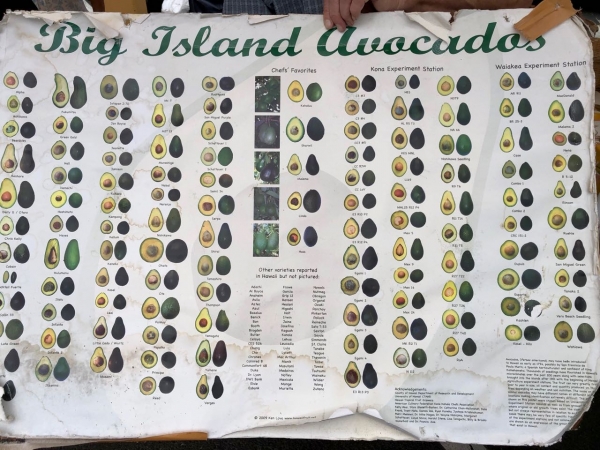 including the Sharwil - King of Avocados. In-season when we visited, Sharwils are among the largest of avocados, prized for a creamy texture, and their high meat/pit ratio. 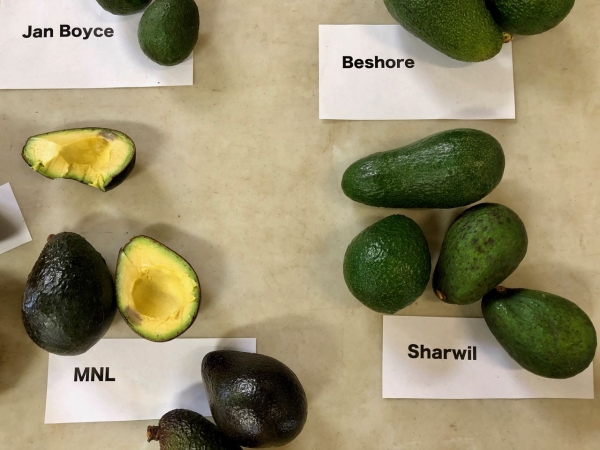 Unfortunately, I don’t believe they’re planted anywhere on the mainland. Boo for us. Like many fruits from the region that do not travel well, what grows in Hawaii often stays in Hawaii.

Jungle John also swings from the trees on the eastern, rainy, or Hilo side of the island. It was there we met up with the aftermath of the Kilauea volcano eruption. During the summer months of 2018, Pele (Hawaiian goddess of volcanoes) let out about 250 million cubic meters (66 billion-ish gallons) of lava, one of the largest Hawaiian eruptions in decades. It's like she's been watching all the crap around this country and the world and just puked a big Blah! blah, blah, blah! It started from Fissure 8 near John’s neighborhood of Pahoa. We visited ground zero. It reminded me of the California forest fires, but if you can imagine, worse. At least in the fire, semblances of the burnt area remain. But with an eruption, everything burns, and the lava erases entire communities. This used to be a neighborhood. 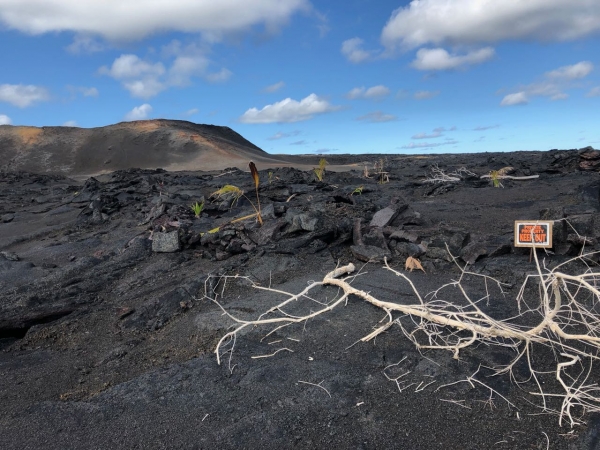 Fissure 8 in the background. 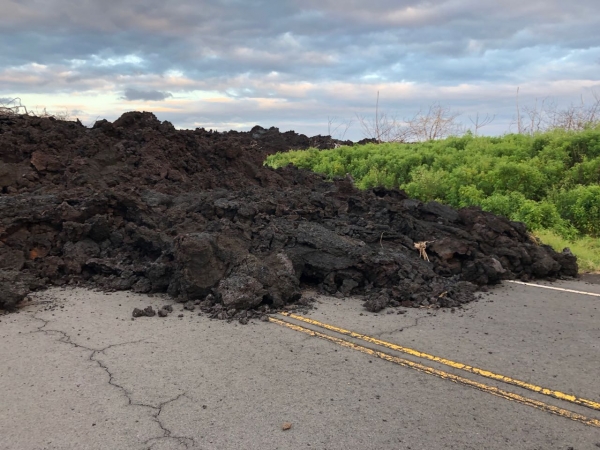 but Pele has not gone to sleep yet. Legend has it as she retreats back up to the volcano, a path of steam is left in her wake. Right now, that path crosses the road to Johnnie's house, 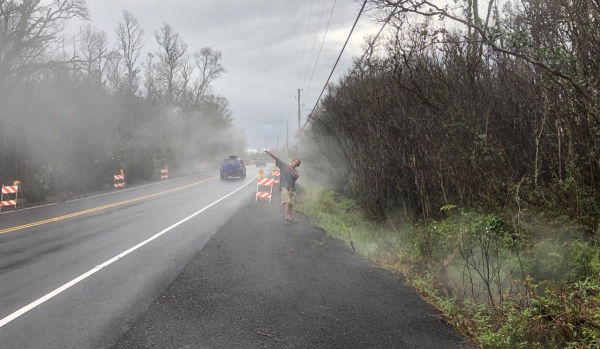 but he’s a lucky one - Bev, his neighbor - not so much. Pele has dropped by for an extended stay, steam pathing across Bev's property and under her house; warping floor boards, smelling up the air, forcing the dear woman to move. 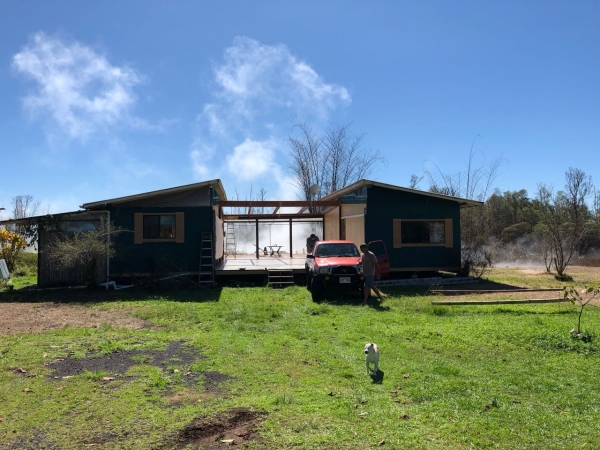 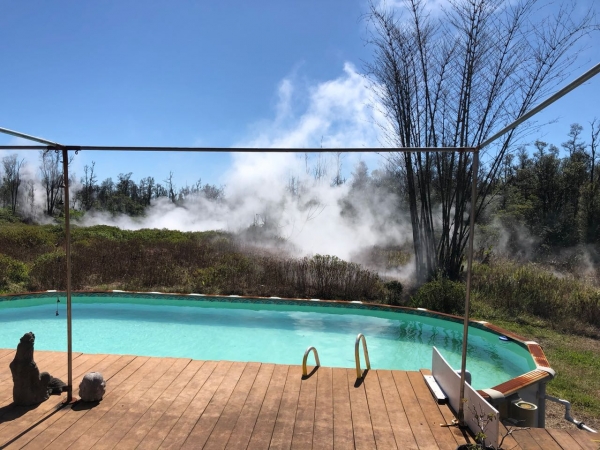 As we tour the property, Bev points a laser temperature gun into numerous sink holes which have appeared everywhere. “125° in this hole, 159° over here.” 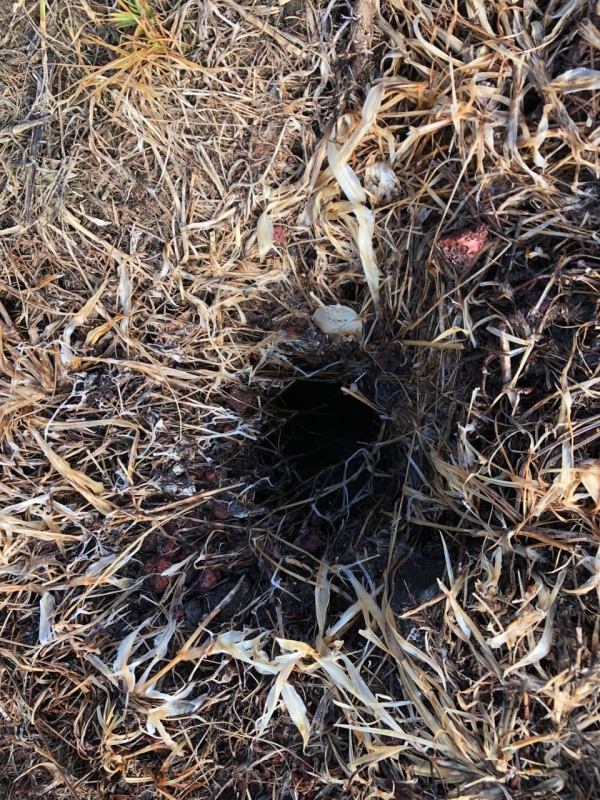 “My neighbor found a hole that measured 209°, so he built a slender metal canister, fills it with meat and potatoes, sticks it down the hole, and slow cooks his dinner! (Hmmmm, this must be the origins of the luau’s buried, smoked pig.)

The heat is so constant, and the steam so hot, it is burning the foliage from the ground up. 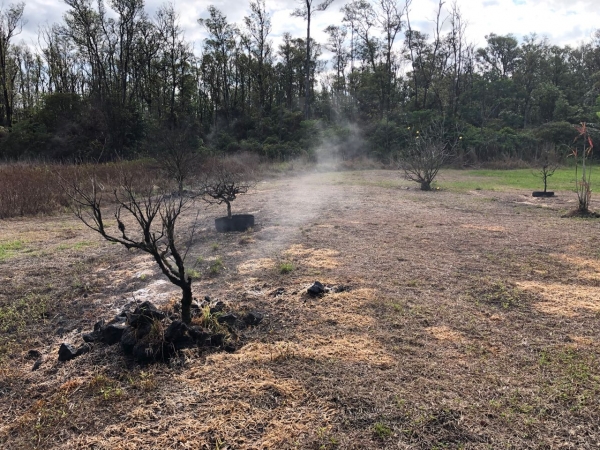 Sometimes the air smells of sulfur, but the first time we visited, it was a different, complex aroma. “More like burning fiber,” Bev accurately describes as she motions to plants toasting from inside the soil. 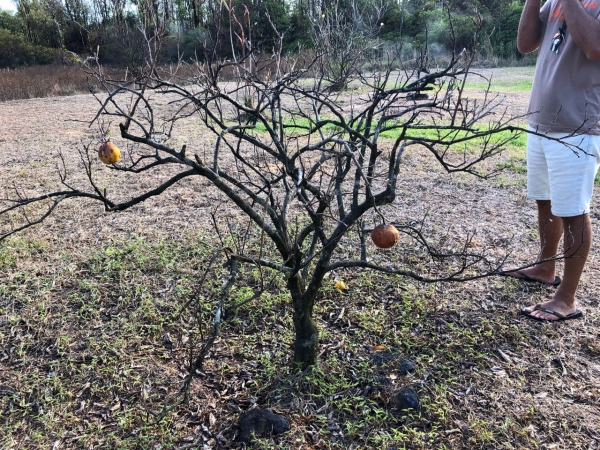 “Reminds me of ironing clothes. Doesn’t it smell like a Laundromat?”

* ‘Aina / that which feeds, is a Hawaiian term celebrating Mother Nature‘s great power to provide food and connect our bodies and hearts back to the land, and to her. Hawaiians call themselves keiki o ka 'aina, or “children of the land,” maintaining a primal and spiritual connection to nature, land, and sea.