After experiencing harassment, owner of Zareen's restaurants speaks out about Islamophobia, racism

Zareen Khan, owner of the popular Palo Alto and Mountain View Pakistani-Indian restaurants Zareen's, will be donating a portion of her business’ proceeds to protect immigrant rights after experiencing what she described as Islamophobia in a local restaurant.

Khan was in a Sunnyvale restaurant on Friday when a man approached her, started talking to her and followed her to the bathroom, she said. When she came out, he asked her where she is from.

"I said, 'yes,'" she recounted in an interview on Sunday.

He proceeded to call Khan a "terrorist" several times, she said. She told the restaurant staff that she felt uncomfortable and he was told they would ask him to leave if he continued.

"There is no artful way to put it: being attacked like this -- in my town where I always have felt safe -- it hurt," she wrote in an Instagram post over the weekend. In the post, she announced that she will now be donating a portion of her restaurants' sales to the American Civil Liberties Union (ACLU). 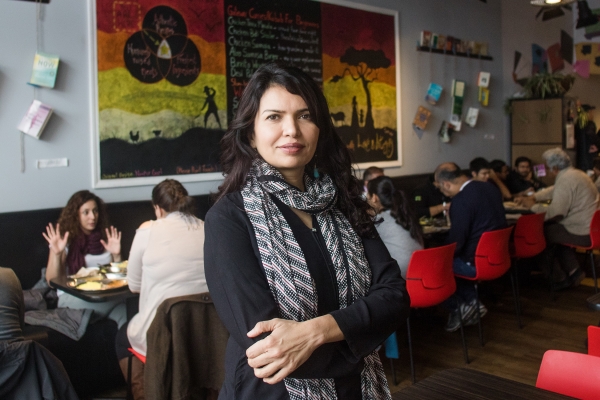 Khan debated whether she should participate in a news story about what she experienced, worrying that the visibility could threaten the safety of herself or her family. She mentioned the man who drove a car into a crowd of pedestrians in Sunnyvale in April, allegedly based on some of the victims' race and his belief that they were Muslim.

Ultimately, though, it felt too important, Khan said -- on the same weekend federal ICE raids were scheduled to target undocumented immigrants around the country -- to speak out about what she sees as a rise in Islamophobia and racism in the Bay Area.

"It's important to recognize that Islamophobia is not solely experienced in confrontational events like this one. It has woven itself into the daily lives of every Muslim," said Khan, who grew up in Karachi, Pakistan, and came to the U.S. to study economics at Northeastern University. "For example, in the morning I have to decide if I will wear a traditional outfit or a safer, more conventionally American outfit. When I get into an Uber and am asked where I am from, is it safe to tell the truth?"

She said that Muslim family members and friends have experienced discrimination and even violence in the Bay Area.

"Mine is not the only story," Khan said.

"You want to assimilate in a community. We want to feel like we're American citizens," she added. "There should not be discrimination ... based on who you are."

She said she empathizes with some of the discrimination that undocumented immigrants face in the United States today, including "being viewed by society as a problem.

"Having this experience and then learning about the unfairness of the upcoming ICE raids prompted me to help in anyway I can," she said. "This country was built and continues to be built by immigrants. We deserve and demand respect."

She plans to donate at least $5,000 in proceeds to the ACLU over the course of the year.

On Saturday, the ACLU filed an emergency temporary restraining order on behalf of Pangea Legal Services, a Bay Area nonprofit that provides legal services to immigrants, particularly related to deportation defense, in response to the planned ICE raids.