I love the great comments and questions you contribute each week, so I thought for a change I’d answer a few of your questions in a blog post proper instead of in the comments...

"If you could write a little more about the difference between emissions that lead to warming, and pollution that leads to cooling, I'd appreciate the clarity. I believe it has to do with the size of the aerosol -- the smaller size atmospheric particles let sunlight through (which warms the planet surface), and the bigger ones block sunlight at a certain altitude (so that sunlight "bounces" back into space before heating the surface)."

I really like this question. It is confusing how some things in the atmosphere warm the planet and some things cool the planet. And I like your guess that maybe the sun bypasses the small stuff but reflects off the big stuff. That is some good intuition! Here is a bit more information, though you can read lots more here and in other places. There are many questions that remain unanswered or uncertain -- the impact of pollutants on climate is a very active area of research.

When incoming light from the sun encounters particles in our atmosphere, it sometimes reflects off of them. But if the particles are too tiny, as you guessed, the light will just go right by. Visible radiation from the sun has a wavelength between 400-700 nanometers, which seems really small (a nanometer is a millionth of a millimeter). But greenhouse gas molecules are less than one nanometer in size. So mostly the light just passes by. There is a small amount of “scattering” that happens when sunlight comes in through our atmosphere. When it does happen, it tends to interact with the shortest wavelengths, which are the blue ones. That is why, in fact, our sky looks blue -- the blue light has been scattered around. It is also why the sun looks yellow and sunsets look red/orange. Instead of seeing all the colors, you see only what’s left once the blue has been scattered away. FWIW, this scattering of light by very small objects is called Rayleigh scattering.

Even when atmospheric particles are big, though, the sun doesn’t always reflect off of them. Some of the larger (1000-10,000 nanometer) particles (“aerosols”) that are suspended in the atmosphere for days or weeks include soot from coal plants and forest fires, sulfates from fossil fuel combustion and volcanoes, mineral dust from deserts, and sea salts from ocean spray. The aerosols that cool best are the ones that are light-colored and stay in the air for a while. Black carbon (aka soot) is a dark aerosol, so it absorbs rather than reflects the incoming sunlight. But sulfates, for example, are very reflective. 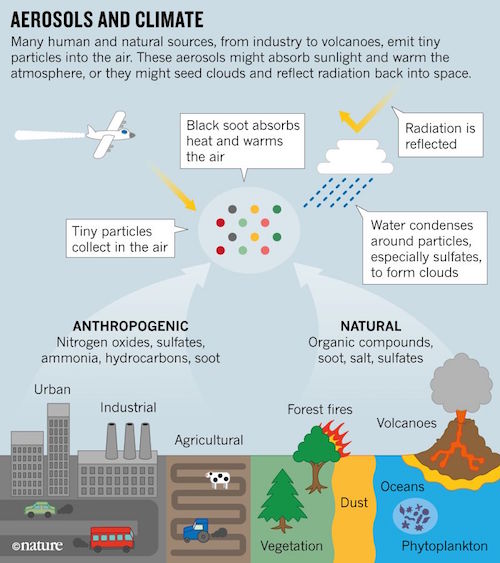 Aerosols can cool not only because they reflect sunlight, but because they disrupt clouds, causing them to form more, smaller droplets that better reflect light. If you have seen clouds from a ship’s smokestacks, or contrails from a plane, these are the effect of pollution interacting with ambient water vapor. So aerosols cool not only by reflecting light directly but also by enhancing the ability of water vapor to do the same.

So particle size and color both help explain why incoming radiation reflects only off of some particles. But what about the infrared radiation emitted by the Earth? We know that greenhouse gas molecules trap that radiation, which is how they warm the planet. (See this earlier post for more on that.) But what about aerosols? They can have a similar effect, particularly when they mix with water, as mentioned above. Water in the atmosphere has both a warming and a cooling effect. Water vapor that has condensed into tiny water droplets, forming clouds, is very reflective and cools the planet. On the other hand, water vapor is a greenhouse gas, and warms the planet. Clouds at night, for example, generally provide a warming effect. 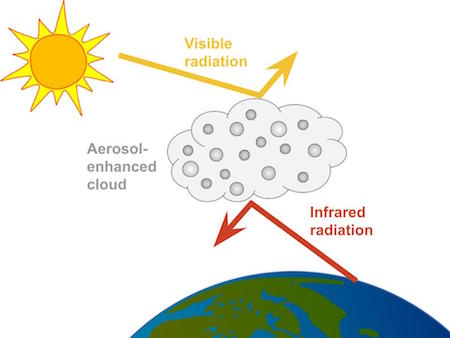 There are many interactions of aerosols with water vapor, clouds, and precipitation, and it’s difficult to tell how they sort out. If you take airplane contrails, for example, it’s not obvious what net effect they might have -- warming or cooling. And it may depend on whether they occur in day or night, over dark areas or light areas, etc. According to a recent report in Nature Communications, contrails warm rather than cool the planet. In fact, by some estimates, aircraft-induced cloudiness accounts for over half of the warming impact of aircraft flights. But research is ongoing.

The net effect of pollution is fairly well understood to cool the planet. Some researchers recently attempted to quantify this effect. Norwegian climate scientist Bjorn Samset says in this interview that “if you removed all our emissions today, then the world would rapidly — within a year or two — warm between a half of a degree and 1 degree Celsius additionally.” Yikes. But stay tuned. The impact of aerosols on climate continues to be a very active area of research with many unknowns.

What is okay to burn? Hmm. AFAIK, none of those is great to burn, at least emissions-wise. But if you think about it from a budget point of view, some things are better than others. As an example, suppose you’ve got an Arctic lake (or a big pond of cow poo) that is emitting lots of methane. If you collect and burn that methane, you are putting a bunch of carbon dioxide into the air. That is bad. But it’s better than putting the methane in the air, at least in the short term. So it is arguably *good* to burn naturally-emitted methane, at least until we learn to do something better.

Here’s another budget-related thought. If you compare burning dead wood to burning fossil fuels, the CO2 from the wood would eventually recycle back into the atmosphere over a sufficiently long time, while the fossil fuel could have just stayed buried in the ground. So it’s arguably better to burn wood than fossil fuel, since you are “just” accelerating a natural process. But that is a bit of a stretch. There is a longer discussion on that in this recent Smithsonian article. 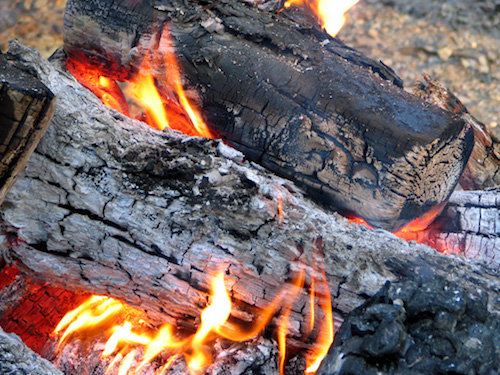 As far as I know, the jury is still out on biofuels like ethanol. I think it’s fair to say that improvements are being made to reduce emissions from growing crops (e.g., sequestering carbon in soil), while fossil fuel extraction is getting more emission-intensive (e.g., getting oil from tar sands). But for now the full lifecycle comparison is not great, with biofuels maybe 10-20% better, though even that depends on the time scale at which you look.

Finally, some combustion generates pollutants other than greenhouse gases. That is why some people claim that natural gas is a “clean” fuel, because it doesn’t release those pollutants. But if you buy that, I have a nice low-lying tropical island to sell you…

I think if people really want to burn something, and I’m sure we do, it’s best to figure out hydrogen, which emits only water when burned.

"What is the relative safety of each mode of transportation? For me, it's not simply about price, speed, convenience and environmental issues. I need to make it to my destination in one piece before anything else…. Perhaps in the next blog posting, we can see the fatalities per passenger mile traveled."

It’s generally reported that buses are much safer than driving. There are lots of kinds of buses, though, from transit buses to school buses to the intercity motorcoaches being discussed here. For motorcoaches specifically, and passenger fatalities specifically, they have been improving in recent years. 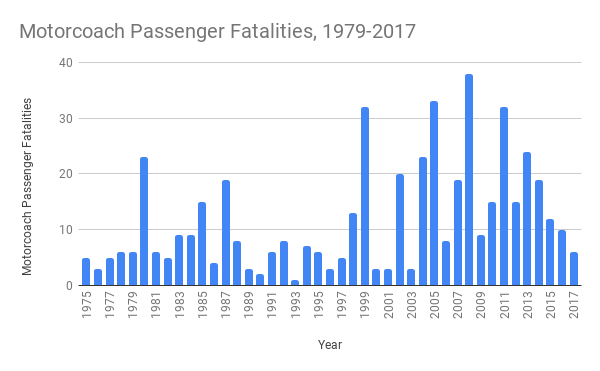 There was something of a crackdown 5-10 years ago, for example, requiring seat belts (!)

You can also look up per vendor information at FMCSA here, though I’m told these are not fully adjudicated. In the last 24 months, Greyhound has had 3 fatal crashes and 76 injury crashes. Given they drive five billion passenger miles per year, that is a pretty good rate. On a smaller scale, Megabus’ western subsidiary (Megabus West LLC) has had 0 crashes in the last 24 months.

So, I would say that buses are pretty safe, and much safer than driving. I expect that planes are technically the safest way to get to LA, though, assuming you ignore the impact of their pollution.

Thanks again for all the great questions!