The banner was stretched across the large entrance to the Cantor Museum at Stanford University. It spread across half the room, although the right side was not completely visible. But visitors could still make out the words: “I AM AN AMERICAN.”

What is this all about I wondered, glancing around as other visitors also looked at it. Some were from other countries, not unexpected at a world-famous university that admits people from around the globe. I asked the ladies at the front desk if there was any explanation of why the banner was hanging there. “It’s part of an upcoming art exhibition. There will be a video on the nearby wall about it.” 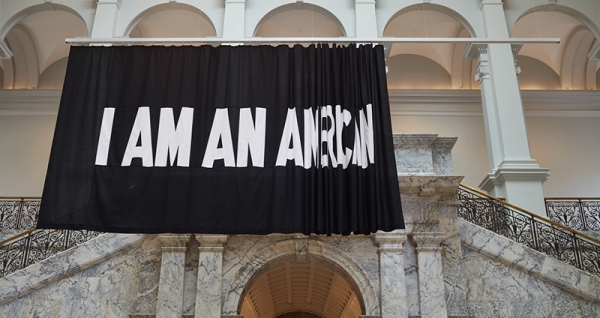 The banner disturbed me. Why proclaim, “I AM AN AMERICAN”? Is this supposed to make me feel proud? Is it suggesting that if you are not an American, you don’t belong in this museum? How do people from other countries feel upon entering this museum and seeing those words? Why is the artist through this university’s museum, making this statement?

Or is this what art is all about – to provoke a response, to be controversial to some who view it?

In a quarterly magazine, “Cantor Arts Center at Stanford University” (Fall, 2019),
Director Susan Dackerman described the work by artist Stephanie Syjuco as a banner “that encourages viewers to reflect on national identity, what it means to be an American and, I hope, leads to conversation about inclusion and community. These are important conversations to have on a university campus. And now the Cantor is better positioned that ever to stimulate and host this type of dialogue.”

Well, the banner doesn’t ask me all that, in fact, it just makes a statement, and is not a question. I guess those thoughtful questions must be part of the video. But if the banner had instead read, “What does it mean to be an American,” I would have been more responsive.

I called Dackerman but she was out of town for the day. However, I soon got an email from Beth Giudicessi, director of marketing and communications for Cantor with a link to the 15-minute video of the artist discussing her many works, including the banner.

Syjuco was born in the Philippines in 1974, came to the U.S. at age 3, lived in San Francisco, and became a U.S. citizen when she was 26. The inspiration for the banner came from an old World War II photo by Dorothea Lange in 1942 of a Japanese-American man who put an “I am an American” large black-and-white sign in his storefront window right before he was carted off to an internment camp. At the end of the video, Syjuco talks about her banner. “There’s been a lot of reckoning about what it means today to be an American citizen – and how it can be taken away from us…What do we stand for? What can we become?”

In the context of a Japanese-American displaying a sign in his storefront during WW II, I understand what he was saying and why, and the meaning of the message. But without that background, I think the banner is unintentionally saying something different in these days of division in our country.

The display will be fully installed by mid-September, including the video. I might suggest to Cantor staff that they have a full-length video but also a three-minute version that talks specifically about the “I AM AN AMERICAN” banner. Let Syjuco get her message out clearly. It is an important statement for all Americans today.