﻿ What is a "ton" of carbon dioxide anyway? | A New Shade of Green | Sherry Listgarten | Mountain View Online |
Include Photos | Include Comments | Print this page | Close Window

What is a "ton" of carbon dioxide anyway?

When I first started reading about climate change and all of the carbon dioxide emissions, I wondered what they meant by a “ton” of carbon dioxide, or “tonne” as it was sometimes spelled. I know what a normal “ton” is. The weight of a VW bug has always been my reference point, though I guess the modern version is a Mitsubishi Mirage. It’s 2000 pounds. But the numbers I was reading about were so huge it didn’t make sense. For example, driving a car about 2500 miles releases one “ton” of carbon dioxide into the air. Here’s my mental image of that, complete with the aforementioned Mitsubishi Mirage: 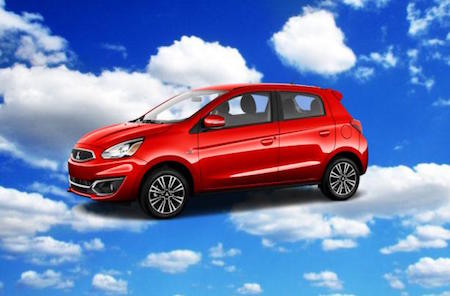 One ton of something (in this case, a car) in the sky

There’s no way driving just 2500 miles does that, right? We would be releasing about a pound of CO2 for every mile driven. A pound of a gas, in just one mile? Gas doesn’t weigh that much! So what do they mean by a “ton of carbon dioxide”? I figured since it was also sometimes spelled “tonne”, maybe it was an obscure European metric unit of volume.

Amazingly, no, they actually mean a ton, as in 2000 pounds. Of a gas!!! So, yeah, our cars release about a pound of carbon dioxide for every mile driven! And that’s if you are getting 25 miles per gallon.

This car puts about two pounds of CO2 in the sky for every mile driven.

It makes you wonder, how heavy is carbon dioxide? Here’s a quiz. If you were to empty a gallon container of milk and fill it up with carbon dioxide gas, how much would the CO2 weigh? (Not the container, just the CO2.) Assume everything is at standard pressure and room temperature (70 F). Your choices are in increasing order of weight. (1)

The answer, to my surprise, is the 9x9 piece of cardboard, or about 7 grams. I never would have guessed that a gallon of carbon dioxide gas weighs that much! In comparison, the nickel weighs about 5 grams, the penny about 2.5, the AAA battery about 12. (2)

Now let’s look at volume. If you want to translate to cubic feet, you can get about 7.5 gallons in one cubic foot. That means a cubic foot of CO2 gas weighs a little over 50 grams, or about 1.8 ounces. With 16 ounces in a pound, you get one pound of gas in just 8.7 cubic feet. So when you drive a mile, the carbon dioxide emitted fills up a 2’ x 2’ x 2’ space, or less than the inside of your refrigerator, and weighs about a pound. If you found a biggish Eichler -- a 2200 square-foot single-story house with 8 foot ceilings -- and filled it up with carbon dioxide, you’d get your ton.

To be fair, CO2 is mostly oxygen by weight, with 32/44 or about 73% oxygen. The oxygen is pulled out of the air when we burn the liquid hydrocarbons (fuel). So the net weight we are adding to the air is only about one-fourth the weight of the emissions. But still…

Another way to think about how much carbon dioxide weighs is to consider the solid form, also called dry ice. You can get a bag of it from Diddam’s for about $15. 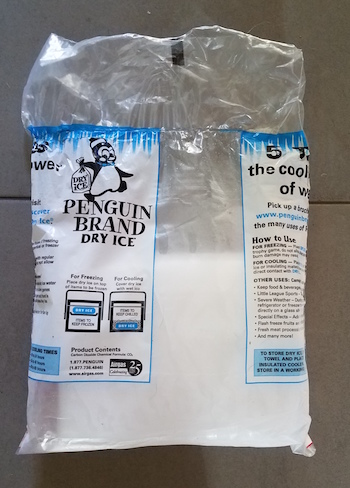 The block of dry ice in the bag is about 9 inches by 7 inches by 2 inches and weighs about 7 pounds. You can use a conversion chart (3) to check that this amount of dry ice yields about 62 cubic feet of carbon dioxide gas. That means it expands by about 850x when it converts from a solid to a gas. That seems “about right” to me. 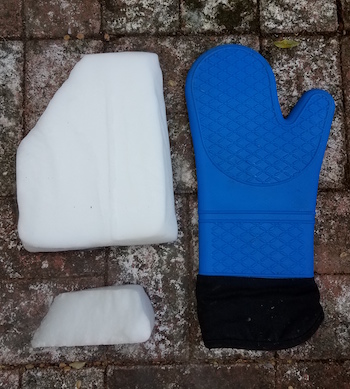 This shows the size of a seven-pound block of dry ice, aka solid carbon dioxide

But I still have trouble wrapping my head around the weight of carbon dioxide, or air for that matter. Think of all the air up above our heads. Our atmosphere is about 300 miles high, but most of it is in the first ten miles (aka the “troposphere”). So each of us has about 10 miles of air pressing down on us, which adds up to 14.7 pounds per square inch of surface area. Do you ever have trouble getting up in the morning? Maybe it’s because your body is waking up to the fact that there is a big weight pressing down on you….

How can we tell that air is actually that heavy if we don’t seem to feel it? One indication is air pressure. You probably know that when you go up to higher altitudes, the air pressure drops. The reason that air pressure is higher at lower elevations is because all the air above is squishing down on it. Seriously. The lower the altitude, the more air is pressing down, so the greater the air pressure is. Given that, you’d think when you got up higher on a mountain, you’d be walking with a real spring in your step. In Tahoe for example, at lake level (6000 feet), you’ve got only 11.8 pounds per square inch on you instead of 14.7. (4) On top of Shasta? A mere 8.6 pounds per square inch. On top of Everest? A negligible 4.4 pounds per square inch. But I don’t exactly see people bouncing around up there, even with oxygen. 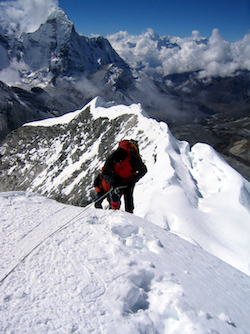 Science can be weird. It helps when it’s intuitive. Otherwise you just have to think about it until it makes sense. I’m still working on this part of it ...

Notes and References
1. In case you are wondering, the (approximate) weights I have are: 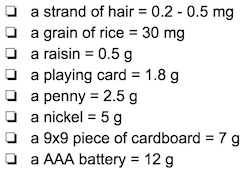 You can find some fun measurement data here.

2. The gallon of carbon dioxide actually weighs about the same as a human eye, but I thought that might gross some of you out, so I used cardboard instead, though I could also have used seven dollar bills (each bill is 1 gram).

3. This is a useful conversion chart from Liberty Gases: 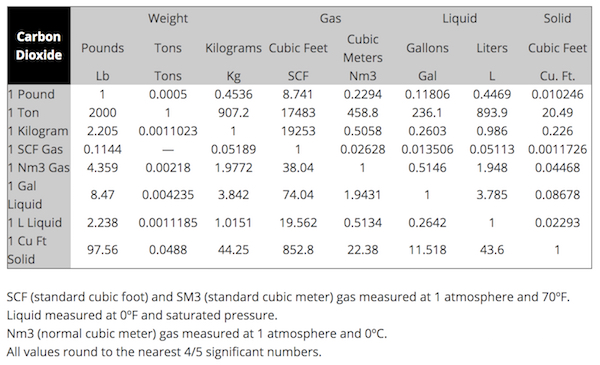 4. There’s a helpful table of air pressure vs elevation here.