﻿ 'Nobody is dining out.' Palo Alto Chinese restaurant Taste is on the brink of permanently shutting down amidst coronavirus spread | Peninsula Foodist | Elena Kadvany | Mountain View Online |
Include Photos | Include Comments | Print this page | Close Window

'Nobody is dining out.' Palo Alto Chinese restaurant Taste is on the brink of permanently shutting down amidst coronavirus spread

For more updates on the coronavirus impact on local restaurants, read this story: Restaurants start to shutter, as public health restrictions increase and dining out declines.

Taste, a Sichuan restaurant in downtown Palo Alto, made less than $600 on Monday, with only two lunchtime diners and about four at dinner.

The 423 University Ave. restaurant's dine-in sales are down 80 to 90 percent and delivery dropped about 50 percent since last month, which owner Sandy Liu attributed to mounting fears about the coronavirus.

With the decline, which has been intensifying since late January, she's struggling to make rent, pay her 10 employees and cover other costs -- to the point that she's on the verge of closing the restaurant for good.

"Basically nobody is dining out — for my restaurant, a Chinese restaurant," Liu said. "Who can afford to keep losing money every day?" 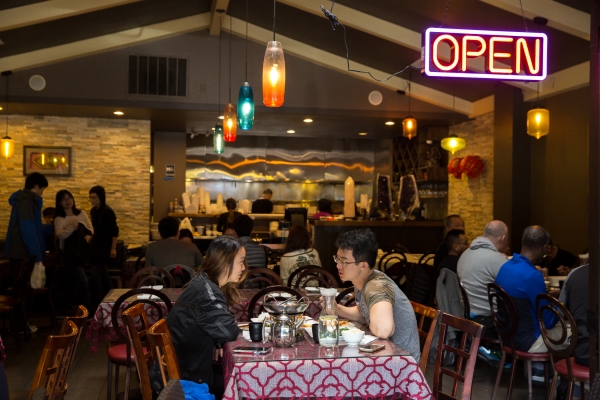 The dining room at Taste in downtown Palo Alto, pictured in 2018. Photo by Natalia Nazarova.

Restaurants throughout the area are reporting slower business — many due to companies canceling large reservations or private events — and are taking additional precautions to protect both diners and their own businesses. The owner of the upscale Plumed Horse in Saratoga took a perhaps unprecedented step this week to eliminate half of the restaurant's dining room to allow for a minimum of six feet between tables. Food truck company Off the Grid is moving all of its weekly markets, including in Menlo Park, to takeout only. Cafe Borrone in Menlo Park announced on Instagram that it would be closing earlier in the evenings "as we are trying to find the best way to survive the impact on our business from the current health situation." Chinese restaurants, including in San Francisco's Chinatown, have been hit particularly hard, according to media reports, despite elected officials' criticisms of "unwarranted" fears that the Chinese community is linked to the coronavirus.

Liu opened Taste, her first restaurant, in late 2017. Her father was a chef in China. She said she invested more than a half million dollars to start the business.

Recently, she was already grappling with the economic pressures that make it difficult for many independent Bay Area restaurants to operate today, such as rising labor costs and expensive rent. A construction project near the restaurant also affected sales, she said. Catering and delivery orders, despite third-party delivery apps' high commission rates, Liu said, helped keep Taste afloat.

But dine-in sales started to drop more significantly in late January, when the coronavirus first started spreading in China, and catering and delivery eventually followed suit, though not as precipitously, Liu said. 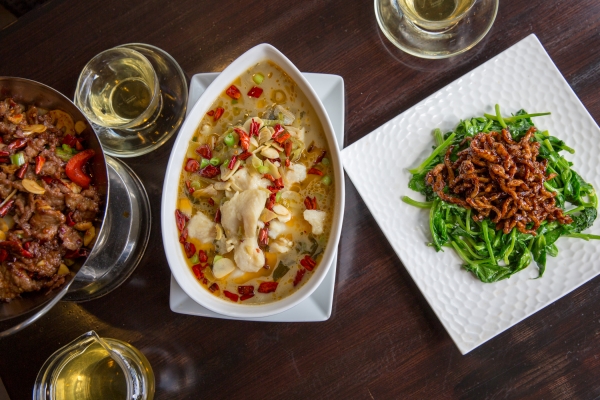 The coronavirus has underscored local restaurants' reliance on tech companies for catering and other business, with a decline after many companies encouraged employees to work from home and to limit travel. (In San Francisco, restaurant AL's Deli closed last weekend, citing 100% cancellation of corporate orders over the previous week as a factor. "A couple of slow weeks, and I think it's very uncertain what’s going to happen to a lot of the small restaurants in the city," chef-owner Aaron London told Eater SF.)

The long-term economic impact on restaurants and other businesses in the hospitality industry remains to be seen as public health officials urge increasing restrictions, including social distancing and cancellation of large events throughout the Bay Area. In Palo Alto, where there have been no confirmed coronavirus cases to date, the city stated Monday that it is modifying or canceling more than 30 events to limit the spread of respiratory viruses and protect residents at the highest risk of catching the virus that causes COVID-19. Santa Clara County, which reported its first death due to the coronavirus this week, announced a mandatory ban on all events of 1,000 people or more starting Wednesday, March 11.

"I don't know what the government can do or the local community can do for us," Liu said. "People are scared."

Andrew Chau, co-founder of Boba Guys, which has a location in Palo Alto, testified about the impact of the coronavirus on small businesses in front of the U.S. House of Representatives' Committee on Small Business on Tuesday.

"As we enter the third month since the news broke, many businesses— particularly those affected in these ethnic enclaves— are holding on for dear life. They do not have sufficient cash reserves to weather this storm," he said. "The economic hardship on each business owner then trickles down to the labor force as many places are letting go of their employees to cut costs. The destabilization of labor and discretionary income will have ripple effects throughout our economy, well extending outside our community."

Chau urged support for a loan assistance program that would give small businesses "runway to adjust to the changes in the marketplace, even if it is caused initially by misinformation and unwarranted stigma."

The state's Employee Development Department is encouraging employers who are experiencing a slowdown in their businesses as a result of the coronavirus to apply for an unemployment insurance work-sharing program.

Judy Kleinberg, president of the Palo Alto Chamber of Commerce, said Wednesday that the organization is considering launching a "shop local" campaign to encourage people to support local businesses.

"It's a very dire situation," she said. "We're mindful of our public health responsibility to businesses and we're also mindful of the fact that businesses are hurting, really hurting right now."

In San Francisco, the Chamber of Commerce is petitioning the city government for an economic stimulus package to protect businesses that have suffered major losses due to the outbreak, according to the San Francisco Examiner. Business groups are asking the city to delay monthly and annual tax collection and to waive retail-related fees for one year.

"I have no idea what will happen (tomorrow)," Liu said. "Most likely I will shut down the business."