﻿ Flying: Coming soon to an airport near you... | A New Shade of Green | Sherry Listgarten | Mountain View Online |
Include Photos | Include Comments | Print this page | Close Window

Flying: Coming soon to an airport near you...

This is the fourth post in an (intermittent) series on flying…

Flying is a growing component of greenhouse gas emissions, and one of the largest for many of us. Can we find a way to halve aviation emissions in the next 10-20 years that doesn’t involve a global pandemic (!) or rely on people volunteering to fly less? With planes on track to be 25% of global emissions by 2050 (1), we need to make some big changes to how we fly. Is there a technical solution? Are we close to building low-emission planes?

Many of you drive hybrids, EVs, or even hydrogen-powered cars. So you may be wondering if we can apply those technologies to planes. Unfortunately, it’s not easy. Fundamentally, batteries are heavy and hydrogen takes up a lot of space. A “good” fuel in the graph below is high up (has lots of energy per volume) and far to the right (has lots of energy per weight). You can see that lithium-ion batteries (purple) are heavy, hydrogen (blue) is light, and neither has close to the energy per volume as jet fuel (red). 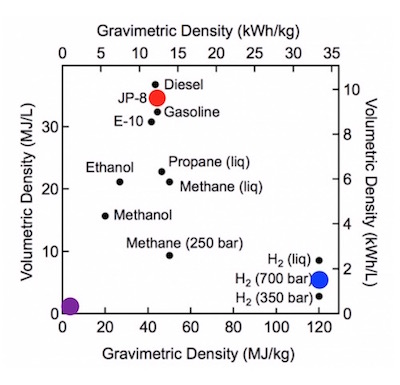 Electric Planes
Batteries have very low energy by weight, with current lithium-ion batteries at around 250 Wh/kg. The technology is improving — various sources suggest we may have 350 Wh/kg in five years, and 500 by 2030. But 800 Wh/kg is needed for standard-sized jets to go even 600 miles, by some estimates. (2) Only small electric planes will be flying for the next 15-20 years, and even then will go only relatively short distances. Eviation’s Alice is one such example, and has been described by its CEO as “basically a huge battery with some plane painted on it.”

Small planes flying short hops are not likely to significantly reduce aviation emissions. Indeed, the focus of many of the electric aircraft companies seems to be more on convenience than on globally significant emissions reductions. Several are developing personal aircraft for commutes, representing a sort of uber-ization of the airspace. (3) The pioneers in this field are hoping to take advantage of the many under-utilized local airports across the country to transform the way that people commute today. Following a path similar to Tesla, these early products are targeted at the very wealthy. To the extent the new aircraft replace cars and trucks, they will add to air traffic but with little impact on emissions since we are electrifying our road transportation. While it’s important to start somewhere, I find it hard to get excited about having these small personal aircraft zipping around overhead to avoid congestion on our streets. When I look at how kindly (or not) we have managed our land and our oceans, I can’t help but worry when we start setting our sights on the skies.

Hybrid Planes
So, how do we clean up the larger jets that represent the lion’s share of our emissions? Hybrids are an option. Plane concepts are being developed in which batteries would be used for takeoff and landing, the flight segments that generate the most emissions. With batteries offloading the most intensive power needs, the jets used for cruising can be smaller and more efficient, which should further reduce the climate impact. Large planes with hybrid drivetrains could plausibly be flying in 30 years. The Airbus E-Fan X, NASA STARC-ABL, and Boeing Sugar Volt are examples of this. But because the advantages of these hybrids apply mainly to the takeoff and landing segments, it could be that they will show substantial emissions reductions only for shorter flights, which represent only about 30% of aviation emissions (see left axis in chart below). 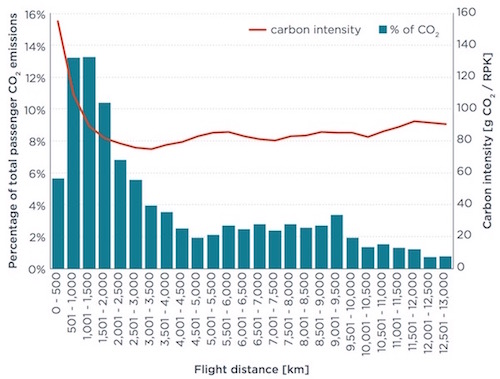 Flights of 1500 km or less constitute around 30% of emissions. Source: ICCT

Hydrogen Planes
What about hydrogen-powered planes? Hydrogen has very different characteristics than batteries do. While batteries are heavy, hydrogen is big. You can see that in hydrogen-powered cars. The fuel tank on a hydrogen-powered Toyota Mirai is twice the size of that of a Camry (32 vs 16 gallons), but its range is only half as much (300 vs 600 miles). Large planes go much farther than a few hundred miles, so where are you going to put all of the fuel? Even when you account for the increased efficiency of the electric motor in these planes (hydrogen typically powers electric motors), and the lighter weight of the fuel, estimates suggest that 3x more space is needed for liquid hydrogen and 5x more if it is used as a compressed gas (this is more common).

An earlier design from Airbus envisioned storing the fuel in a “hump” atop the fuselage, sort of like a camel. 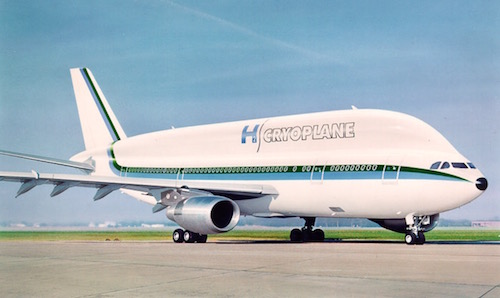 NASA is considering a different “blended wing” aircraft body for these planes, which provides more room for the fuel.

These designs have promise, but decades of research and testing are needed. Can hydrogen play a role in the meantime?

A local-ish company called ZeroAvia, with offices in Hollister and Cranfield (UK), is trying to thread the needle, pursuing a smaller hydrogen-powered design that can be ready for market much sooner while addressing some of the problems we will need to solve if hydrogen planes scale up. I had the opportunity to talk with Gabriel DeVault, Head of Drivetrain for ZeroAvia, about how his company is tackling this problem. DeVault previously worked on zero-emission motorcycles and learned to love the simplicity of electric engines. While flying an electric plane as a hobby, he became intrigued by the promise of hydrogen for clean aviation because of its light weight and the decreasing cost of hydrogen sourced from renewables. Excited by the prospect, he joined ZeroAvia about a year ago.

ZeroAvia’s near-term goal is to make commercially available, in just three years, a 10-or 20-passenger zero-emissions plane that can go up to 500 miles. DeVault makes it clear that “We are not a flying car company. We are not building autonomous planes. We build power plants for existing and new aircraft that fly 500+ mile routes. We have a near-term, achievable, beneficial program.” For this first step, the electric drivetrain they are building will work with existing aircraft designs, which speeds things up and removes regulatory hurdles. The fuel tanks are a new element but will be much like those in hydrogen-powered cars. They will likely be mounted externally on the wings, and will be made of a combination of carbon, kevlar, and fiberglass that has been well tested in the automotive space. The fuel cells and other components of the drivetrain do not require much innovation. The engine itself, DeVault says, is simple, with only two moving parts. In fact, he emphasizes that this is a big area for cost-savings, given that maintenance represents about half of the operational costs of aircraft. Combined with savings from cheaper fuel, ZeroAvia predicts that this hydrogen-powered plane will save a customer 40% in operational expenses over a comparable traditional plane.

So what are the hard parts of their plan? It’s not the technology. It’s not even regulation, since they are working largely with existing and approved components. “Honestly, in my opinion, the biggest challenge is the scaling, the bootstrapping of the process,” said DeVault. “To happen quickly, a lot of airports have to jump in simultaneously. It’s like what Tesla did, rolling out both the cars and the charging infrastructure at the same time. We have to do something similar, with hydrogen at the airports.” ZeroAvia is partnering with UK-based EMEC for hydrogen production and distribution in the UK. Though EMEC produces hydrogen from surplus tidal and wind energy, DeVault envisions a small electrolyzer at each airport to create the hydrogen locally. The hydrogen would be as green as the power grid at the time it is generated. Locally synthesized hydrogen, with a port in the tarmac (and mobile fuel trucks as needed) would enable sub-15-minute refueling.

You may be wondering about safety, since hydrogen can ignite much more easily than other fuels. (4) At relatively high concentrations, the tiniest spark can cause hydrogen to ignite (see third and fifth row below). Hydrogen will also ignite across a wide range of mixtures with air (first two rows). 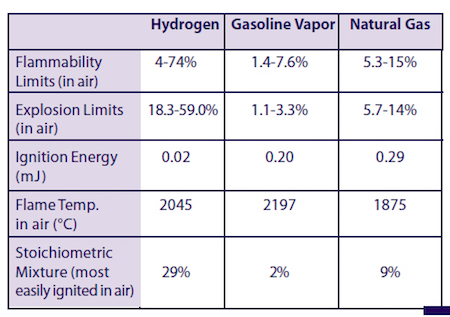 Hydrogen also burns invisibly and without much heat (energy is emitted as UV radiation). So it needs to be handled very carefully, particularly in closed environments. Despite this, DeVault says he much prefers working with hydrogen to batteries. “From someone who has to wrench on these things on a daily basis, when the (hydrogen) valve is off you can touch anything. There is no high voltage. High-voltage systems are scary.” He also notes that the lower operating temperatures and simpler engine are meaningful safety improvements.

It is not easy to transform our energy systems, and it is particularly tricky overhauling aircraft. There are tradeoffs in all of these designs. There is general agreement that batteries alone won’t be enough to clean up our transportation emissions, at least without radical changes in battery design. (5) Planes are a problem, but so are heavy-duty trucks and shipping. The number and variety of green hydrogen testbeds is growing, and I expect we will learn a lot about the production, storage, and distribution of hydrogen in the next few years. I am glad to see ZeroAvia exploring its near-term potential for aviation, and bigger players like those involved in the CHEETA project looking into more impactful but longer-term concepts. But it is hard to imagine that the planes most of us fly in will change much in the next 20 years. If technology is coming up short, what role can policies play in decreasing aviation emissions? I will cover that in the final blog post on flying.

Notes and References
1. This recent report from the International Council on Clean Transportation is a great overview of aviation emissions.

2. Vox has a nice overview of electric planes, which includes this statistic from a 2018 Nature article.

4. You can find some basic information on hydrogen fuel here.

5. Lithium-air batteries and lithium-sulfur batteries can have about 10x the energy per unit weight as lithium-ion, but they are a ways out.

You may have seen pictures of places like LA or Delhi with clear, unpolluted skies that they haven’t seen in decades. Or maybe you’ve seen a spectacular view on a nearby hike. Turns out skies over our area are clearing up too! Here is a snapshot from PurpleAir showing air quality near downtown Palo Alto since January 1. You can see the lower values in March. Will you be sad to go back to smog? Thanks to my neighbor Sharad for pointing this out to me... 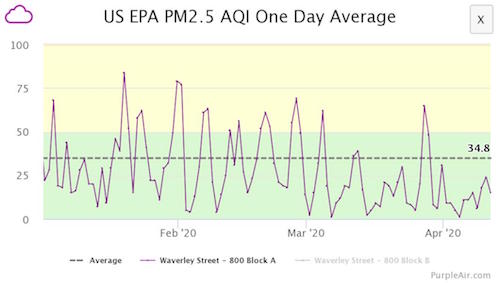