﻿ Thinking of moving? You're not alone. | A New Shade of Green | Sherry Listgarten | Mountain View Online |
Include Photos | Include Comments | Print this page | Close Window

Thinking of moving? You're not alone.

This would be funny if it weren’t also true. Just today (1), I got:
- A warning about extreme heat (a “Heat advisory”)
- A notice about “public safety power shutoffs” in Santa Clara County
- A cancelled morning hike due to a “Red Flag warning” day (fire danger)
- An email about “The Great Shakeout” (practice for earthquakes)
- A nice beefy property tax bill

All that was missing was an alert that our home value is dropping due to rising Bay waters, or maybe that taxes are going up due to the need to prepare for droughts. (Oh wait, isn’t that part of Measure S?) 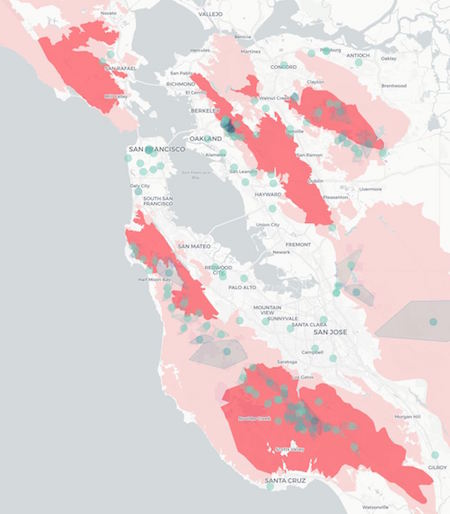 In our house, air filters and uninterruptible power supplies are plugged in, ready to be used. We’ve got poles out so we can easily close our skylights. We pulled down our shades first thing this morning to keep it cool inside. I gave some extra water to a few plants and set up a protective screen for another. I know how to do this now. The question is, do I want to?

I bet a lot of you have friends who took an extended break from this area recently due to smoke or COVID or some combination. Did that inspire thoughts of moving? There’s a lot of inertia to packing up. People often don’t move when economists believe they “should”. A reporter who has done years of research on climate migration, Abrahm Lustgarten, lives in a high-risk fire area in Marin County, an “imperiled tinderbox” as he puts it. He asked Jesse Keenan, an expert on the effects of climate change on real estate markets, if he should be selling his house, and got an immediate “Yes”. But when he discussed the situation with his wife: “The facts were clear and increasingly foreboding. Yet there were so many intangibles -- a love of nature, the busy pace of life, the high cost of moving -- that conspired to keep us from leaving.” 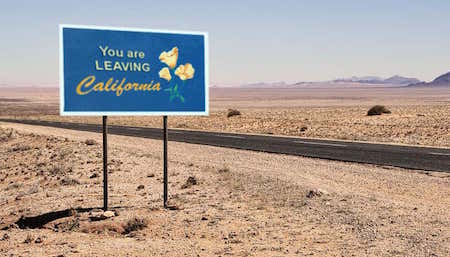 I’m sure many of us feel similar inertia. I wouldn’t go anywhere until my daughter’s done high school. But after that? Is it a good time to be ahead of the curve? I love cooler weather and the outdoors, so New England or the northwest (the part not on fire) seem appealing. I’m also Canadian, which opens up more possibilities assuming I could swallow the exit tax. I expect all those places dread an influx of California refugees. But could it happen?

Climate migration is not just theoretical; it’s happening today. Drought is impacting rural livelihoods in places as far-flung as Guatemala, where people are moving north, and the African Sahel (2), where people are moving to cities and the coast. Storms and floods are causing urban migrations in India and Bangladesh. Migrations are starting to happen in the States as well. We tend to ignore climate impacts here, assuming that technology will keep us comfortable and productive. But the costs of that can be prohibitive. People are beginning to abandon coastal areas in Louisiana, moving to drier land in the interior. Real-estate prices in high-risk areas of Florida are dropping. Flooding along the Missouri and the eastern seaboard has led to contentious discussions about managed retreat. Lustgarten suggests that people move when they are forced to, for example when insurance coverage disappears, when decreased property tax reduces local services, when subsidies and loans dry up. He quotes Keenan as saying “Once this flips, it’s likely to flip very quickly.”

By some measures, it’s pretty good where we live. ProPublica shares some county-by-county data predicting the impacts of climate change in the next 20-40 years assuming the (highly unlikely) worst-case IPCC scenario. San Francisco and Santa Cruz counties are among the least impacted in California. San Mateo County is impacted by sea level rise, and Santa Clara County by fire. But places like Fresno County fare much worse, with impacts from heat, fires, and low-yield agriculture. Southern states including Florida and Texas are even worse off. Lustgarten writes “One influential 2018 study, published in The Journal of the Association of Environmental and Resource Economists, suggests that one in 12 Americans in the Southern half of the country will move toward California, the Mountain West or the Northwest over the next 45 years because of climate influences alone.”

There’s no doubt that as people leave the Bay Area, others will move in. This region is, and will remain, more livable than many others. But the ProPublica data does not reflect air quality, or power shut-offs, or closed recreational areas, or cancelled outdoor activities, or the many other responses to changing climate that etch away at quality of life. By those measures, it’s for each of us to determine whether we stay or go. Has anyone been thinking about this?

Notes and References
0. Just in time for the holidays, Acterra is hosting an event with six local Bay Area chefs explaining how to prepare their favorite plant-based holiday dishes. In addition to live cooking demonstrations, the hosts will discuss practical tips and tricks on how to embrace a more plant-forward diet, reduce food waste, and work with an induction stove. See here for more information and to register.

1. I started writing this post a few days ago.

2. The African Sahel is the band of Africa just below the Sahara, going from Mauritania across Niger to Sudan.

3. Two good places to read about climate migration are ProPublica’s coverage and Quartz’s coverage. They talk not only about the impact on people who are forced to migrate but also about the impact on cities and people in areas less affected by climate, and how they can adapt to better handle an influx of climate migrants. Rolling Stone has a great article cautioning that a tendency to overstate the migration problem is feeding nationalism, pointing out (with many examples) that most migration happens within a country. And the Brookings Institution has a policy brief that highlights the lack of concerted effort, particularly by the US, on this issue.

August 2020 and September 2020 were the hottest on record in California. October is on the same track. It’s 95 in mid-October as I write this.

The Earth didn’t fare much better, with the warmest September temperatures since record-keeping started in 1880.