The Silver Bullet for our Emissions

People often say there is no silver bullet for our greenhouse gas emissions. That’s certainly true in general. But for those of us on the mid-Peninsula, there’s not all that much that we do from the perspective of a traditional emissions inventory other than drive, heat our buildings, and throw away food, in that order. (1) That makes zero-emission vehicles (ZEVs) pretty close to a silver bullet for our area’s emissions. Some of you may want to give them “bronze bullet” status since they don’t heat buildings. Either way, we need to embrace ZEVs with the priority they deserve.

I’ve written blog posts on shuttles, long-distance buses, vehicle miles traveled, and a few other ways to get us out of cars. They work when adopted, but behavior is hard to change. I’m not seeing many of you hopping into slow-moving buses or exchanging your home here for an urban apartment. Bikes are great, but they aren’t always a fit. At the end of the day, cars are central to many of our lives, but we just aren’t seeing enough adoption of low-emission electric vehicles.

That is why I breathed a sigh of relief when Newsom announced his executive order directing California’s Air Resources Board (CARB) to identify policies that will get us to 100% ZEV sales by 2035 (2). This is exactly the kind of significant, forward-looking action that we need to meet our climate goals. As NASA climate scientist Peter Kalmus put it, “A switch to EVs is one of the smallest and easiest pieces of the climate solution puzzle.” I am super excited about the executive order, and want to see phase outs of gas cars adopted across the country.

But let’s start with California. What does it look like to get to 100% ZEV sales across the state by 2035? What are the challenges and objections, and what do we need to do to get there?

First, it’s helpful to know that many countries have set similar goals to phase out gas-powered cars. The map below illustrates this, with the addition that China just announced that by 2035 half of all sales will be ZEVs, and the other half hybrid. 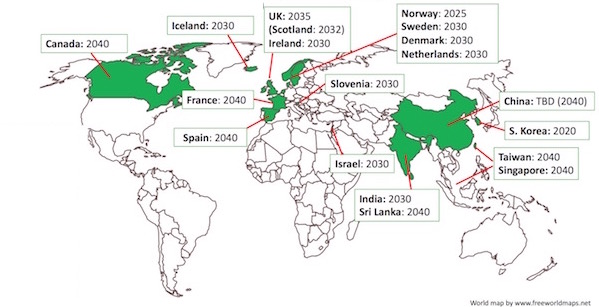 Car manufacturers are following suit by making commitments to low-emission vehicles. Toyota and Volvo both plan to generate half their sales from electric vehicles by 2025. Ford, Volkswagen, and BMW are investing heavily in electric models across their full lineup. Bentley just announced that it will be going all-electric by 2030. And there's more.

In fact, the growth of the electric vehicle industry is one of the major drivers of Newsom’s order. Electric vehicle sales have become California’s #2 export in just three years, growing far faster than any of the top exports. The 2035 phase out enables us to simultaneously grow our economy and wage a critical part of the war against climate change. 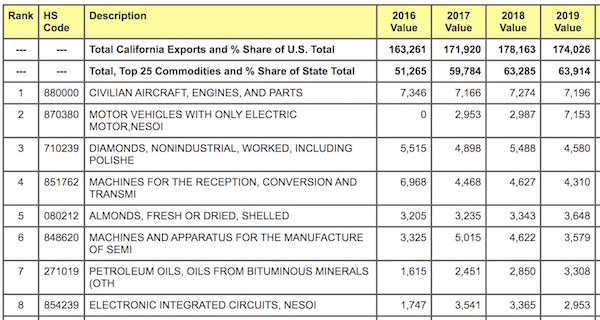 Check out the size and rate of growth of California’s electric vehicle market (Source: US Census Bureau)

Announcements are one thing and achievement is quite another. California tends to hit its climate goals but this ZEV mandate isn’t policy yet, it’s just an executive order. Will CARB find a way to get there?

The graph below shows what ZEV adoption might look like. In this trajectory, the percentage of sales that are ZEVs (the dotted line) would increase modestly through 2025 and then grow much faster, presumably as prices come down, more models become available, and charging infrastructure is deployed.

What 100% ZEV sales by 2035 might look like (Source: Presentation by CARB to the CEC by Joshua Cunningham, August 2020). Note: Here “ZEV” does not include the plug-in hybrid cars, which are shown as PHEV.

Are we on track for this kind of curve? Not yet. Joshua Cunningham, the head of CARB’s Advanced Clean Cars program, estimates that California is headed towards 1.5 million ZEVs by 2025 and 2.4 million by 2030. In contrast, the above graph shows about 3 million ZEVs in 2025 and 6 million by 2030. It seems unlikely that we can immediately start doubling our adoption rate to get to 3 million in 2025. I would expect the adoption curve to ramp up a few years later and be a little steeper if we are going to phase out new gas cars by 2035. CARB’s job over the next few months is to determine what the curve should look like based on various constraints and what it will take to make us successful. (3) 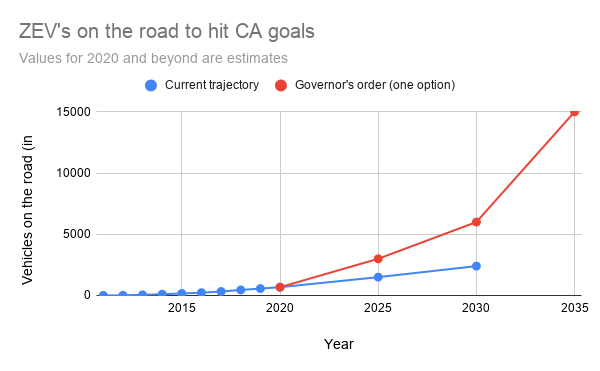 What is holding back EV adoption? There are a couple of things. One is just the lack of suitable models at good prices. EV prices have been high, though government incentives and lower total cost of ownership can bring overall cost to parity. Sticker prices need to come down further (4), which will happen as battery prices drop and competition heats up. Popular styles like small crossovers and pickup trucks are lacking but in the wings. Battery range is increasing and charging is getting both easier and faster.

Auto manufacturers have also been reluctant to advertise their electric vehicles, which has suppressed demand. Many models haven’t been profitable, and dealers dislike them because there is little lucrative maintenance to be done on them. Manufacturers are selling them largely because they have to: California’s Advanced Clean Cars program has mandated for years that a certain percentage of vehicles sold here need to be low-emission or zero-emission. (5) With no interest in exceeding that mandate, advertising has been negligible.

This is changing. Automakers are increasingly setting their own ambitious goals for EV sales, so I hope we’ll start to see better marketing and education from dealers. A new “Climate Insights” report on why consumers reject ZEVs found that many have unfounded concerns about poor acceleration and high cost of maintenance. Some decent marketing would go a long way to winning over more buyers.

Even with fully committed automakers, though, is our electricity supply and transmission adequate, is there enough charging infrastructure, and is the supply chain for batteries robust enough to support sustained and rapid growth in ZEVs? The EPA’s Andrew Wheeler lit into Newsom with this snarky criticism: “California’s record of rolling blackouts—unprecedented in size and scope—coupled with recent requests to neighboring states for power begs the question of how you expect to run an electric car fleet that will come with significant increases in electricity demand, when you can’t even keep the lights on today.”

RTO Insider has a good article on this. My take is I’m not worried so much about the electricity supply as I am about the charging infrastructure. This report that they cite, from the Department of Energy, estimates that our charging capacity could effectively be doubled if we were smart about when things were plugged in. That comes down to placement and availability of chargers, particularly at workplaces and other places where people are during the day when solar energy is ample. California has nowhere near the charging infrastructure that is required. It has around 67,000 public or shared private chargers today, but needs 250,000 by 2025 to meet a benchmark set by Jerry Brown. That is about 100 new chargers every day for the next five years. Even with $1B set aside, there is a significant funding gap. EV adoption and daytime charging infrastructure need to go hand in hand.

Around the world, China and to some extent Europe are ramping up chargers. The US and others are lagging. (Source: Bloomberg presentation to the CEC, June 2020)

Our area has adopted ZEVs faster than any region in the country. Nevertheless, even in our wealthiest zip codes, at most 11% of registered cars are electric vehicles. (6) With automakers coming on board as California creates policy, this will change, and quickly. The Drive writes: “The world of motoring is changing right before our very eyes. We may not see the shift happening in real-time, but the next 15 years will likely go down as the most rapid change in commercial propulsion in history.” Finally! This is the work we must do to get our atmosphere back to a comfortable equilibrium. ZEV adoption is a no-brainer. As Representative Nicole Macri (D-WA) put it when Washington State was trying to pass a similar bill: "I really think that if Boris Johnson can do this, then so can we." I’d love to hear your thoughts, though!

Notes and References
1. I’m not saying that’s the right way to count. In my opinion, we are each of us responsible for the emissions related to our consumption, whether it’s the food we eat, the things we buy, or the services we use. But the emissions accountants tally things up differently. By their reckoning, driving accounts for two-thirds of our emissions, and it has an easy fix.

2. A “ZEV” is a zero-emission vehicle. We typically think of those as battery-powered vehicles like Teslas and the Nissan Leaf, but it also includes plug-in vehicles like the (belated) Chevy Volt and Ford Fusion Energi, as well as hydrogen vehicles like the Toyota Mirai and Honda Clarity.

3. You will see on the graph that even if we phase out the sale of gas cars by 2035, they still compose 20% of the cars on the road by 2045, when California is targeted to be carbon neutral. That has led some researchers to conclude this order is not aggressive enough.

4. You can get a sense of current sticker prices and incentives at this page by Electrek.

5. Volkswagen settlement funds have been used to create a terrific Normal Now campaign, but we need to see aggressive promotions for ZEVs coming from the dealers themselves.

6. You can lookup ZEV adoption by zipcode here by setting the Map Filter to “Zip”.

7. This graph from a Bloomberg presentation to the CEC shows global EV adoption. China and Europe have over twice the adoption of the US.

Just a few days ago the northeast passage through the Arctic Ocean finally froze shut after a record 112 days (see red bar below). Just a few decades ago this passage was closed year-round. 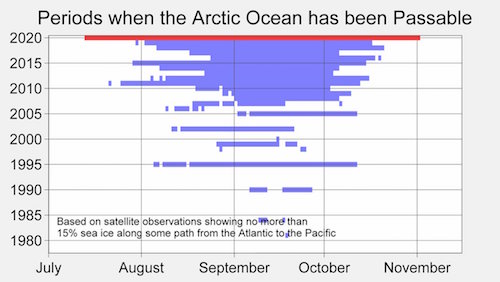