﻿ Where is it unsafe to bike around town? | A New Shade of Green | Sherry Listgarten | Mountain View Online |
Include Photos | Include Comments | Print this page | Close Window

Where is it unsafe to bike around town?

The weather is amazing these days and lots of us are getting out on bikes and e-bikes. Bike shops have been very busy, even running low on inventory as we all start to emerge from our pandemic bunkers. Adults and kids are trying new routes to work and school, while people looking to regain their fitness are seeking out new bike loops for exercise. This is great for our health, for the air, and for the climate. But as our bike population grows, it’s more important than ever that we make our streets and intersections safe for bikers.

The Office of Traffic Safety reports that in 2018 cyclists were involved in 99 accidents in Palo Alto in which someone was injured or killed. 18 of those involved a cyclist under 15 years old. For Mountain View, a somewhat larger city, the numbers are 53 and 6, respectively. Menlo Park, a city about half the size of Palo Alto, had 31 cyclists involved in an accident, with 5 of those involving children on bikes. The Office of Traffic Safety ranks all of our cities among the worst of comparably-sized cities when it comes to cyclist involvement in accidents. As we add more cyclists, our numbers will grow larger unless we pay careful attention to road design.

I consider myself very fortunate to have been able to commute by bike for almost all the years I worked. I used to joke, though, that the most dangerous thing I did all week was bike to work. It was often dark and I usually had to cross a busy road, whether it was 101 or Foothill or El Camino. Even though my bicycle was well-it and I often wore a reflective yellow jacket, I had to watch carefully.

One route I took was Rengstorff over 101. I rode by there the other day to see what it looks like now. More cars are encroaching in the bike lane, perhaps due to new housing along Rengstorff. 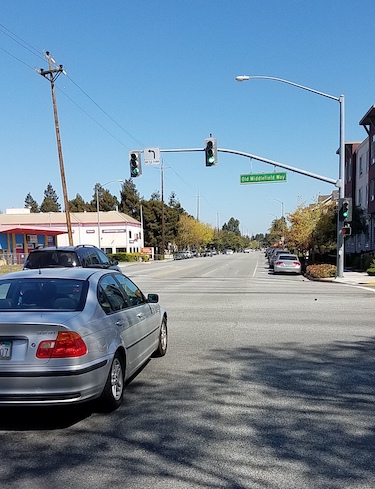 At one point it was almost impossible to get past a large pickup truck parked in the bike lane without veering into the traffic lane. 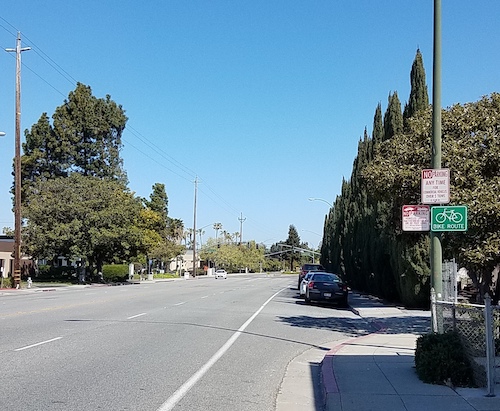 As a cyclist I don’t like passing cars like this because there’s little maneuverability in case a driver is getting out and opens a door into you. (That happened to me just the other day, but luckily I had plenty of room to get out of the way.)

I used to worry about riding past the 101 off-ramp on Rengstorff, especially in the dark. But when it’s light out, on a weekend with little traffic, it doesn’t look so bad. 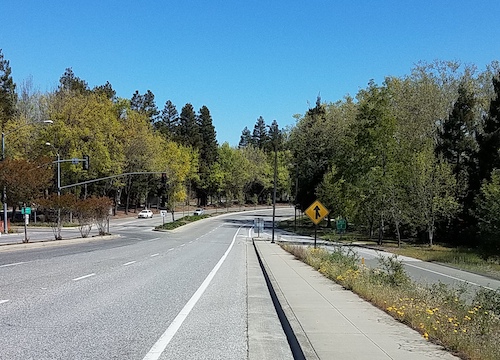 The bike lane heading east on Rengstorff goes past the 101 north off-ramp.

One thing that bothers me about this merge is there is no indication that bikes are present; there is just a standard merge sign. The bike lane is not distinguished with special paint or markings. When the light is poor it is easy for a vehicle to be careless here.

Just around the corner from this merge is a veritable forest of signs warning cars to watch out for pedestrians. Couldn’t we have better signage at the merge between a freeway off-ramp and a designated bike route? 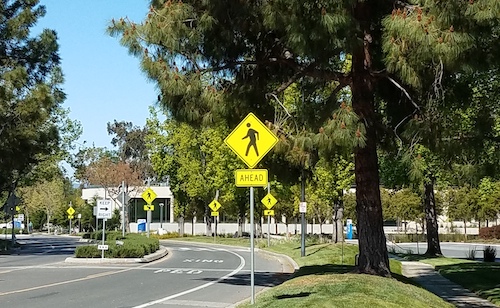 Cars near the Intuit campus are given plenty of notice about pedestrian crossings.

But the Rengstorff route feels downright safe compared to San Antonio. In my opinion, the intersection of San Antonio and Charleston is an accident waiting to happen. But here are some pictures along the road going from east to west.

This picture is taken on San Antonio heading west, just before crossing 101. I’m not sure why the green sign shows this as a bike route. The Santa Clara Valley Bikeways Map does not show it as such. If the bike route goes off to the right, it’s not obvious to the rider, who might well go straight. 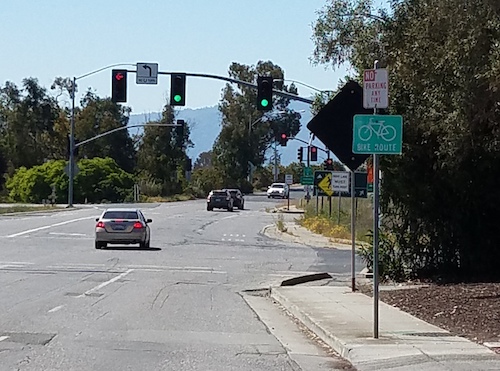 Is it clear which way the bike route here goes?

Going straight takes the cyclist along an overgrown sidewalk that is shared by pedestrians and cyclists going in either direction as the opposite side of San Antonio has no curb or extra lane space. 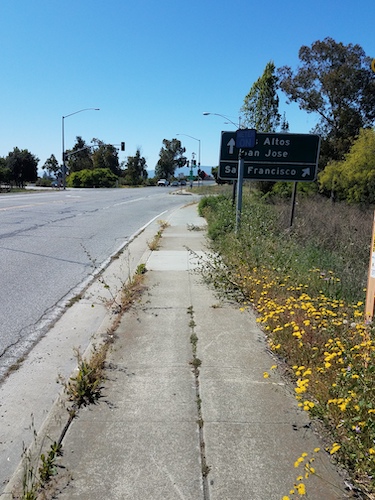 This route is for cyclists going in both directions along San Antonio.

There is a small crosswalk where cars exit San Antonio onto 101 North. 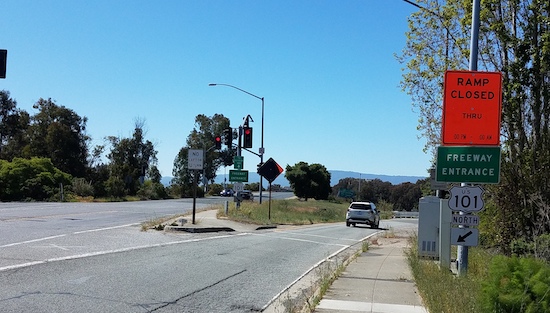 Cyclists and pedestrians cross the on-ramp to 101 North.

Can vehicles easily see that cyclist and pedestrian crossing? Why is there no sign indicating the crossing?

Interestingly, just over 101 at the southbound off-ramp, there is a sign marking the pedestrian (and cyclist) crossing, though it’s not clear if it’s sufficiently visible. In my experience cars very rarely stop for those waiting to cross. 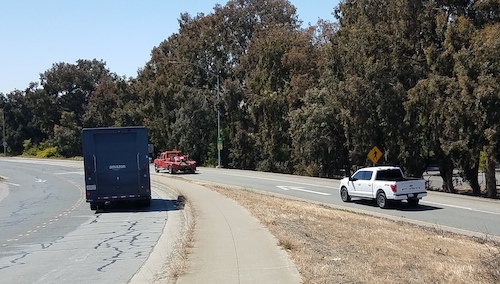 Can you see the sign indicating a crossing over the off-ramp from 101? The crossing is more or less under that red truck.

But it’s the Charleston intersection that especially worries me. Here is what that looks like, heading west on San Antonio across Charleston. 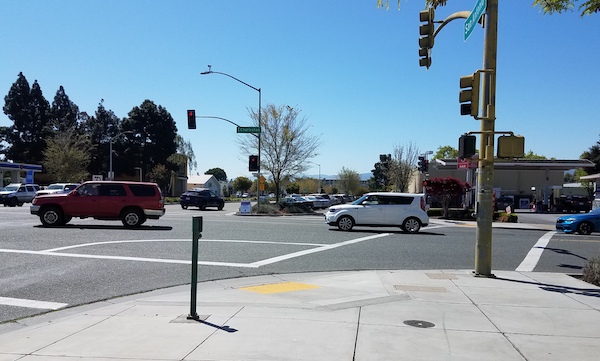 The main problem I find is that there are two right-hand turn lanes (from San Antonio onto Charleston heading south) in a poorly marked intersection. Signage is minimal, so cyclists may not be aware that there are two right-hand turn lanes. The light for drivers to turn right goes on when the cyclists and pedestrians have a light to go straight ahead through the crosswalk. The driver in the far turn lane may not see the crosswalk until he or she is right on top of it. The cyclists may not know to look at both lanes. 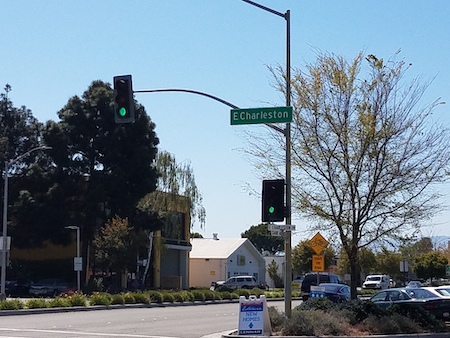 No signs here indicate to pedestrians and cyclists that there are two right-turn lanes.

The crosswalk button location makes this more problematic. It is not located near where the bikes enter the crosswalk. Instead it is by the curb on the traffic light post, making it awkward at best to push on a bike. If a person neglects to hit this button, choosing just to cross with the cars, then the cars will have one less clue that someone is in this crosswalk. The cyclists I saw heading east at this intersection this morning did just that. But even if you press the button, the poor visibility and signage here are imo an accident waiting to happen. 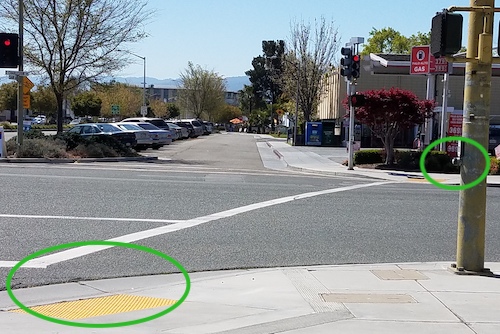 The button to cross is in an awkward position for bikes.

So, this is one place where I feel pretty unsafe biking around town. Even after I push the button and the light indicates I should go, the cars are turning right at the same time. Will the car in the second right-turn lane see me?

Where do you feel unsafe on your bike around town, and how should the city fix it? If you’d like to send me photos of the problem I’d be happy to post them in the comments.