Artist Jane Kim has always sought to showcase nature in her work. It's only natural, then, Kim said, that the focus of her latest show — her first solo exhibition in five years — would be food.

The Bay Area-based artist spent much of the pandemic in her Half Moon Bay studio, working diligently on the eight pieces of art that make up her exhibition Poached, Pruned, Peeled, which opened to the public at 5 p.m. on Friday, April 30, at Palette Gallery in San Francisco. Each piece of art — done in Kim's signature, powerful graphic style — is meant to make the viewer consider their relationship to nature through food, Kim said, and how that relationship may have changed over the course of not just their lifetime, but human history. 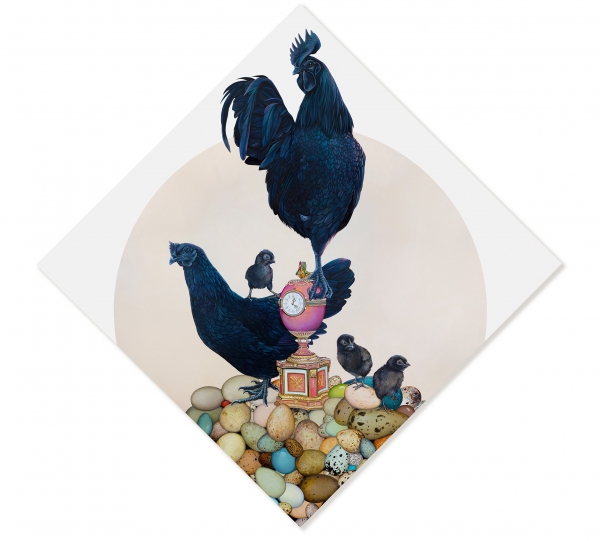 "All Black Everything or The Artifice of Value" by Jane Kim, one of eight pieces of art that make up her new exhibition: Poached, Pruned, Peeled. Image courtesy of Ink Dwell Studios.

"One of the most intimate connections we have with nature is eating, but that connection has been somewhat lost over time for a variety of reasons, " she said. "This body of work explores the various aspects of modern human history that have created a gap in our understanding of food as nature, and nature as food."

This is her first solo exhibition in five years, according to her husband and business partner Thayer Walker. Kim's studio Ink Dwell has in recent years become increasingly well known for Kim's naturalistic art on a (literally) larger scale, including half a dozen murals of wildlife in Redwood City and an intricate, 11-story mural of a 50-foot monarch butterfly in San Francisco. 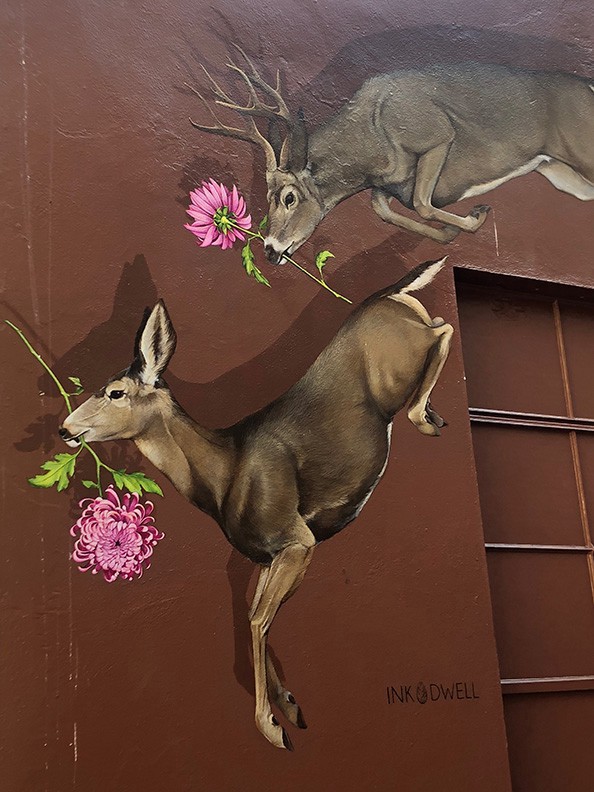 A painting from Kim’s "Flora from Fauna" in downtown Redwood City (note the chrysanthemums, which were historically grown as a major industry within the city during the early part of the 20th Century. Photo by Charles Russo.

Though Palette is a gallery, it also offers cocktails, spirits and a dinner menu. That this particular show takes place in a restaurant setting is no coincidence, Kim added.
"I just want people to be more curious about the world that we live in, even if it's something like — broccoli," Kim said, asked about what she'd like viewers to walk away from the show with. "Like, wow — what really is that? How does it grow? What does it look like (before it gets to me)?"

Kim's Engineered, one of the exhibition's eight paintings, shows a roster of different apple varieties, each connected to a wild cluster of vines, leaves and flowers. Look closer, though, and the vines reveal themselves to be Apple iPhone and iMac chargers — a commentary on the way that technology has played a role in warping Americans' relationship with nature and food, Kim said. 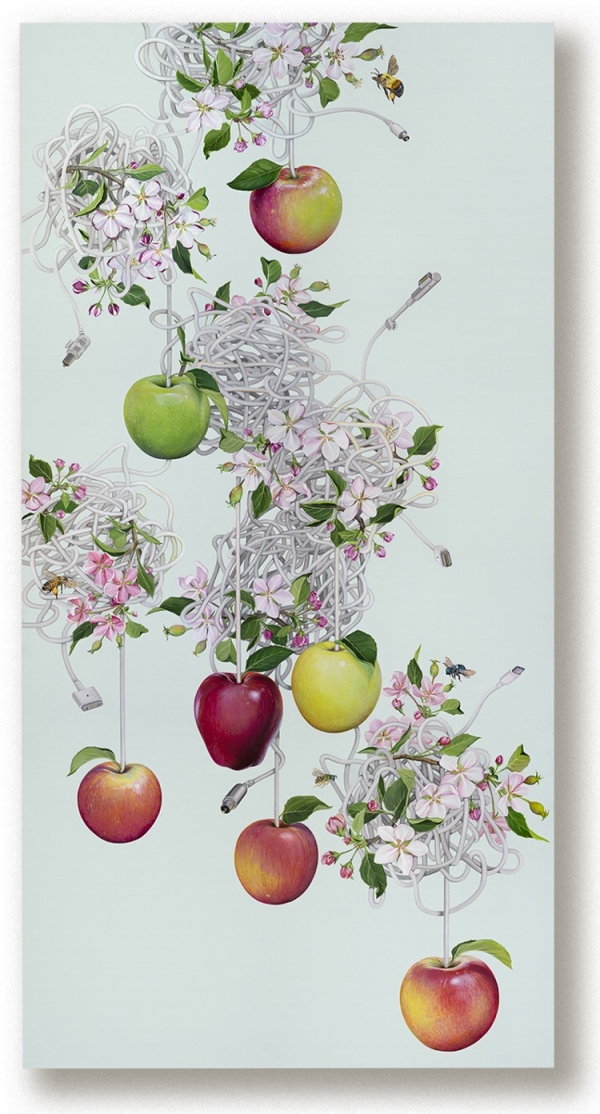 Whether it be apps that deliver us meals and groceries at the touch of a button — the kind many of us have used through the course of the pandemic — or the fertilizers that sustain mass, monoculture farming operations, technology has widened the gap between most Americans and agriculture, Kim added.

That the show is being allowed to proceed in person is something of a milestone, Kim said, adding that it had been postponed a number of times because of the pandemic.
"The very first painting I made is Seafood Medley — it was the painting that got me through the very first of the pandemic, and I just poured myself into it," Kim added. "In some ways, the pandemic allowed me to have space to think about this even deeper than I maybe would have otherwise."

The exhibition will run with limited gallery capacity through June 26. For more information, go to palette-gallery.com/exhibtions. 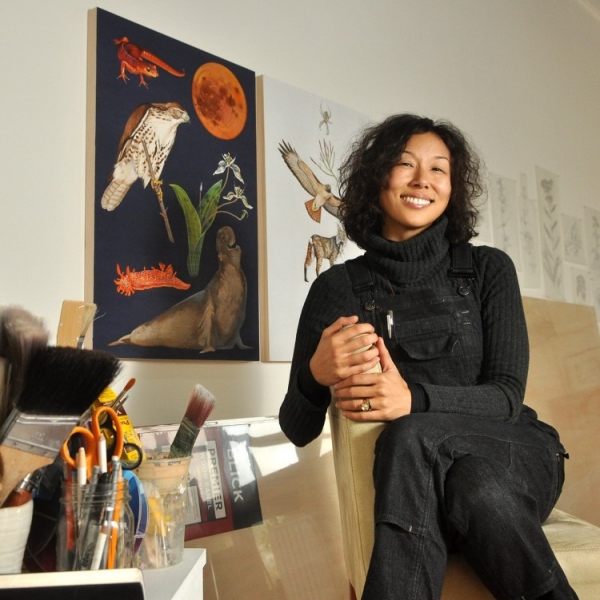 Jane Kim at Ink Dwell Studio on the Coastside. Photo by Charles Russo.