Farm stand safari: Cruising the Coastside for the perfect produce

San Mateo County farmers may spice up their roadside offerings with more fruits, jams, pickles and other snacks

Cruising the San Mateo County coast down Highway 1, it’s never long before you find a farm stand that showcases just what’s in season. The phenomenal bounty of the local farms paints the landscape in a palette of beautiful earthy tones: emerald fields of Brussels sprouts, pops of orange pumpkins, dusky green artichokes and golden sunflower petals dancing around rich brown centers. At a stand, customers can purchase these directly at the property where they’re produced, and then take them home to enjoy.

Soon, you might also find a broader assortment of items that aren’t produced on site. Since March, the San Mateo County Agricultural Advisory Committee has been considering updating farm stand guidelines to satisfy customer cravings for ready-to-eat items by sourcing more from partner farms. 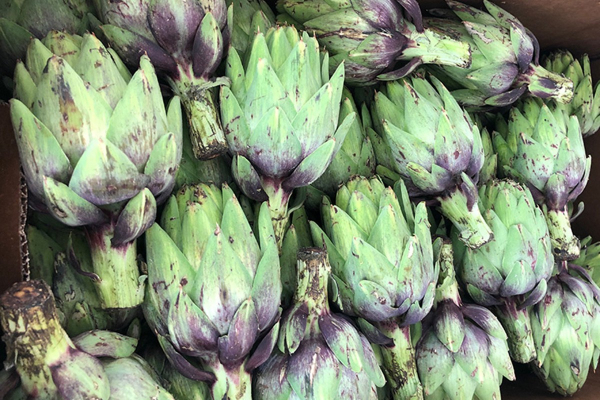 “Artichokes are a popular seller. Peas are still good. But when families stop at the stand, they want something to snack on such as fruits. If you don’t have it, they don’t return.” The San Mateo County Agricultural Advisory Committee has been considering changes to farm stand guidelines that could allow farm stands to sell more items that aren't produced on-site. Photo by Charles Russo.

“Artichokes are a popular seller. Peas are still good. But when families stop at the stand, they want something to snack on such as fruits. If you don’t have it, they don’t return,” farmer Bob Marsh of Bob’s Vegetable Stand and Pumpkin Farm said at a recent committee meeting. “If you just have a couple items, your farm stand isn’t going to stay open very long.”

A farm stand is one thread in a lifeline for preserving the agricultural industry as local farms face tough circumstances: The total estimated gross value of San Mateo County agricultural production dropped by more than 27% between 1999 and 2019, while operating costs have continued to rise. The COVID-19 pandemic and CZU Lightning Complex fires made last year even more challenging.

“We’re kind of a dying breed. I hate to see us dying off altogether,” Marsh said.
Expanding the types of items that can be sold at farm stands could help. If the proposed guidelines are approved, additional offerings could supplement the local vegetables that thrive in the cool, temperate environment with more snack-friendly produce like stone fruits, and lightly processed foods such as jams, nut butters, preserves, juice and pickles. Committee members plan to finalize their comments on the county’s latest draft of the proposed guidelines at their September 13 meeting.

In the meantime, there’s plenty to feast on. Farm stands provide an opportunity to see where food comes from and meet the people cultivating it, often in their backyards. The stands also offer a delicious taste of what’s growing.

“(At a farm) you’re getting fresher, healthier food,” says Dawn Dillman of Andreotti Family Farms. “That is the crème de la crème.”

Part of the joy of visiting farm stands is stopping by those that pop up along your path, but we’ve created a guide featuring a few to whet your appetite. 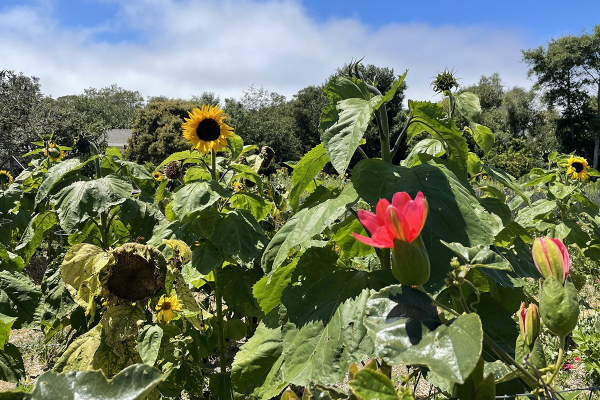 As local farmers face tough circumstances, some supplement income from the produce they sell with flowers, fruit-picking and other ventures. Photo by Sara Hayden.

Andreotti Family Farms
The Andreotti family has been farming since 1926. Their roots are in growing artichokes, beans and broccoli, but they have a plethora of other winter vegetables too including kale and garlic — “food staples people want on their plate every day,” says Dillman, who works with her husband, Frank Andreotti, and family. They also have fruits, jams, jelly, nuts and other treats from sister farms in the area. Their historic century-old barn where they previously sold their produce was destroyed in a fire in February. They’re currently raising money to rebuild, and usually sell produce on site Fridays, Saturdays and Sundays from noon to 6 p.m.

Heading a few miles south from Half Moon Bay, this stand sits just on the east side of Highway 1, across from cows peering over the coastal bluffs. It’s a sight that’s as dramatic as it sounds. Apples, plums, peaches and cherries might catch your eye up front (and we’ve been equally tempted by the strawberries), but look in the barrel bins behind and you just might find the largest potatoes you’ve ever seen. At least, we did. We grabbed a giant russet spud that weighed in at a whopping 1.67 pounds. Our editor suggests cooking them up as twice-baked potatoes: Slice a spud in half lengthwise, bake it, scoop out the pith and mash it, put it back and pop the potato back in the oven for one more go. Dress it up with toppings of your choice (maybe something else from your farm stand finds?), and you’ve got yourself a hearty meal.

Cozzolino’s
The Cozzolino family provides something fresh all year round, including Christmas trees during the winter holiday season. During other months, stop by for staples from their farm like beans and peas, lettuce and chard, onions, potatoes and eggs. They also have seasonal stone fruits and strawberries from partner farms. Already looking forward to fall? Pumpkins will be available soon. This year, they plan to start offering them in mid-September. The farm stand is usually open Friday 11 a.m. to 7 p.m., and Saturday and Sunday 10 a.m. to 7 p.m. 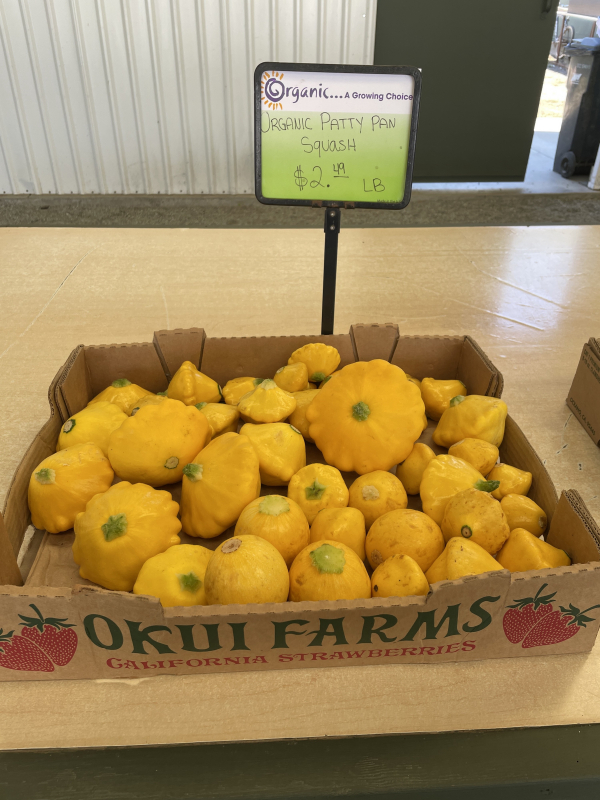 “(At a farm) you’re getting fresher, healthier food,” says Dawn Dillman of Andreotti Family Farms. “That is the crème de la crème.” Photo by Sara Hayden.

At HV Produce, find fresh chilacayote and bright orange squash flowers, cranberry and fava beans, tomatoes, onions and potatoes. They also have artichokes (full sized and in mini too) as well as a selection of local honeys and honey comb. The stand is open seven days a week starting at 9 a.m. until at least 7 p.m., and a little later during the weekends.

You can enjoy Ouroboros’s fresh produce grown in water at a variety of restaurants on the Coastside, throughout the Peninsula and in San Francisco, but to prepare your own, you can visit one of the nation’s largest commercial aquaponic farms right in Half Moon Bay. They have a collection of leafy greens and herbs. Ouroboros is usually open Thursday through Sunday 10 a.m. to 5 p.m., and Monday 10 a.m. to 3 p.m.

Pie Ranch was founded in 2002 with a focus on regenerative farming and food system education, and the surrounding lands are cared for in partnership with the Amah Mutsun Tribal Band and Land Trust. At the farm stand, the aptly named Pie Ranch does indeed have literal pies, but they’re symbolic of something more — idealistic “pie in the sky thinking” in line with their vision for social change. The farm stand also has fresh produce from neighboring farms, herbs, fresh cut flowers, preserves, hot sauce from local peppers and more. Stop by any day, except Tuesday when they’re closed — weekday hours are noon to 5 p.m., and weekend hours are 10 a.m. to 5 p.m. 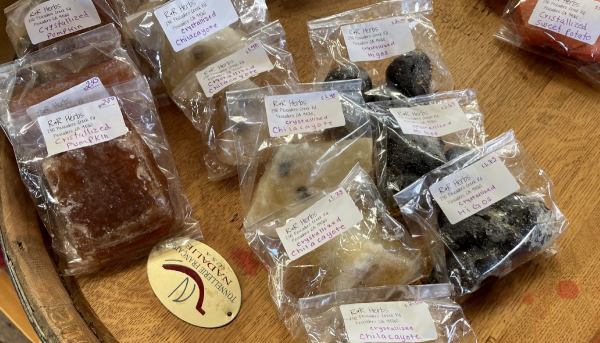 Owner and operator Jose Ramirez’s bread and butter is actually an herb — rosemary, to be precise. The farm sells it wholesale, and also directly to consumers at its Pescadero farm stand. Also available at the stand are fresh duck eggs, chayote, tamarind and plump, green tomatillos. There are dried goods too, offering a selection of rich, red chiles, fruits preserved in syrup and a multitude of beans that look like perfectly polished pebbles.
A sweet bonus: you can pick your own berries — blackberries, raspberries and olallieberries among them — or pick up a pint (or several) at the stand. Just as sweet are the baked goods. You can get pan dulce or a slice of tres leches cake.

The Minaidis family started their produce business in 1964. Since then, they’ve provided Coastside favorites like artichokes and Brussels sprouts and other produce from Southern California, depending on what’s growing when. They also provide patrons with pumpkins and fragrant fresh wreaths and trees when ’tis the season for that.