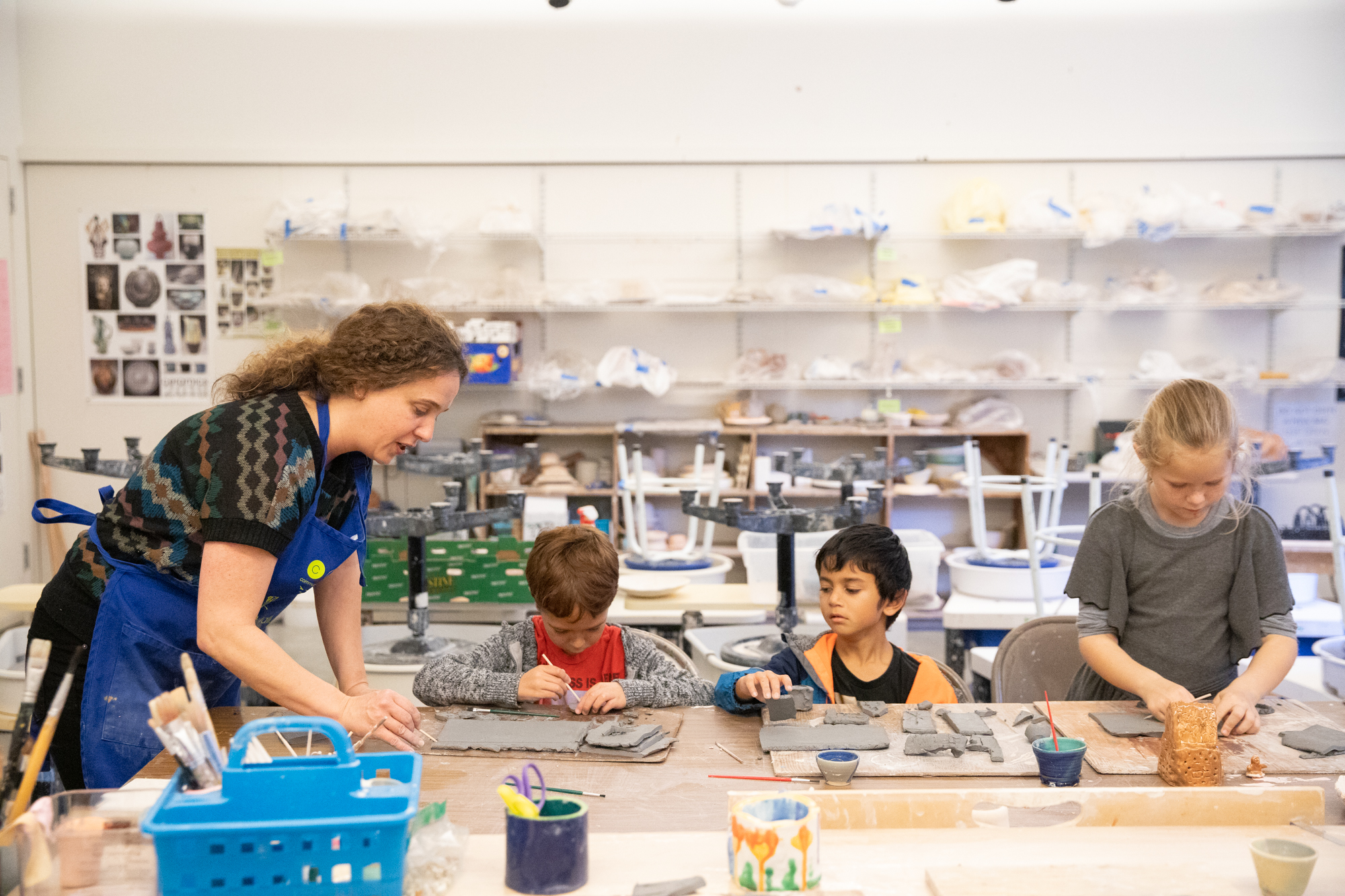 Ceramics teacher Amy Steinmann explains to students, James, Vineet and Adini, what to do with their clay during a class at Community School of Music and Arts in Mountain View on Dec. 19, 2019. Photo by Magali Gauthier.

Back in the 1940s, Natalie Werbner was a young girl living in Boston who wanted to take music lessons. Her family had recently immigrated from Russia and didn't have much money, but there was still one option available to her. It was a settlement house, a progressive co-op school that offered arts and music instruction for anyone, rich or poor, immigrant or native-born.

As the Werbner later explained it, she never forgot how the school provided her an opportunity when all the other doors were closed. About 30 years later, that memory served as an inspiration to her when she was living in the Bay Area and helped launch the Mountain View Community School of Music and Arts (CSMA). It started rather modestly with outdoor classes held in the backyard of a rented house, but today the organization has expanded to teach over 30,000 students per year, making it the largest arts institution of its kind in the area.

"I thought that there should be schools like this all over the country," Werbner said in an interview earlier this year. "It's astounding how much the organization has grown. It's so important to pass the torch along."

CSMA is one of seven nonprofit organizations serving Mountain View residents that benefit from the Voice's annual Holiday Fund . Donations are divided equally among the nonprofits and are administered by the Silicon Valley Community Foundation at no cost, so 100% of contributions go to the recipients.

The music and arts school has come a long way over the last 50 years, but it has never strayed from its mission to teach the creative arts to those who otherwise wouldn't have that opportunity. While CSMA normally charges anywhere from $200 to $350 for classes, the faculty strongly promotes financial aid programs. Over the last year, the school granted $545,000 in scholarships and other aid, which CSMA administrators say is an unprecedented amount.

On a Thursday afternoon visit, the school's hub at the Finn Center off of San Antonio Road was a scene of activity as students zipped around for their after-school lessons. The corridors at the center were filled with the echoes of youngsters at drum lessons and choral recitals. For her ceramics class, arts teacher Amy Steinmann was teaching a group of elementary-school age students how to make holiday mugs with penguins and polar bears.

Each year the school offers more than 500 arts and music classes, most of which are geared toward adolescents. Over the years, CSMA has expanded its scope, teaching off-campus classes at tech companies and providing arts and music education to K-8 students in Santa Clara and San Mateo county public schools, including the Mountain View Whisman district.

CSMA is also making efforts to broaden the age range of its students. The directors point out they have more senior citizens participating than ever before. In fact, the school featured its first ever senior chorus this year, which included about 20 members, and also introduced its first music classes for babies as young as 3 months.

Looking out the window of the school's boardroom, CSMA executive director Vickie Scott Grove pointed to the nearby towers of new apartments that were sprouting up all around the Finn Center. Parents and their children have a rekindled interest in arts instruction, she said.

"With all this growth, there's been quite an increase in demand for our programs," Grove said. "Compare this to five years ago when it seemed like everyone only wanted to learn about math. Now it seems like the importance of the arts is coming back."

CSMA's facility is currently overwhelmed with more demand that it can handle. Starting next year, the school is planning a $5 million expansion that would replace a shuttered tire shop next door with a 3,200-square-foot annex.

Perhaps the best kept secret at CSMA is its free concert series, which regularly attracts a lineup of highly acclaimed performers. Earlier this month, the school hosted three-time Grammy winner John Daversa for a free performance of his latest jazz album. Next year, the school plans to host Taylor Eigsti, who has been nominated for multiple Grammy awards and who was previously a student at CSMA. Eigisti's event will showcase his new "crowdsourced jazz composition" that he is creating with suggestions from Bay Area students. Last year, CSMA offered more than 30 free concerts and events.