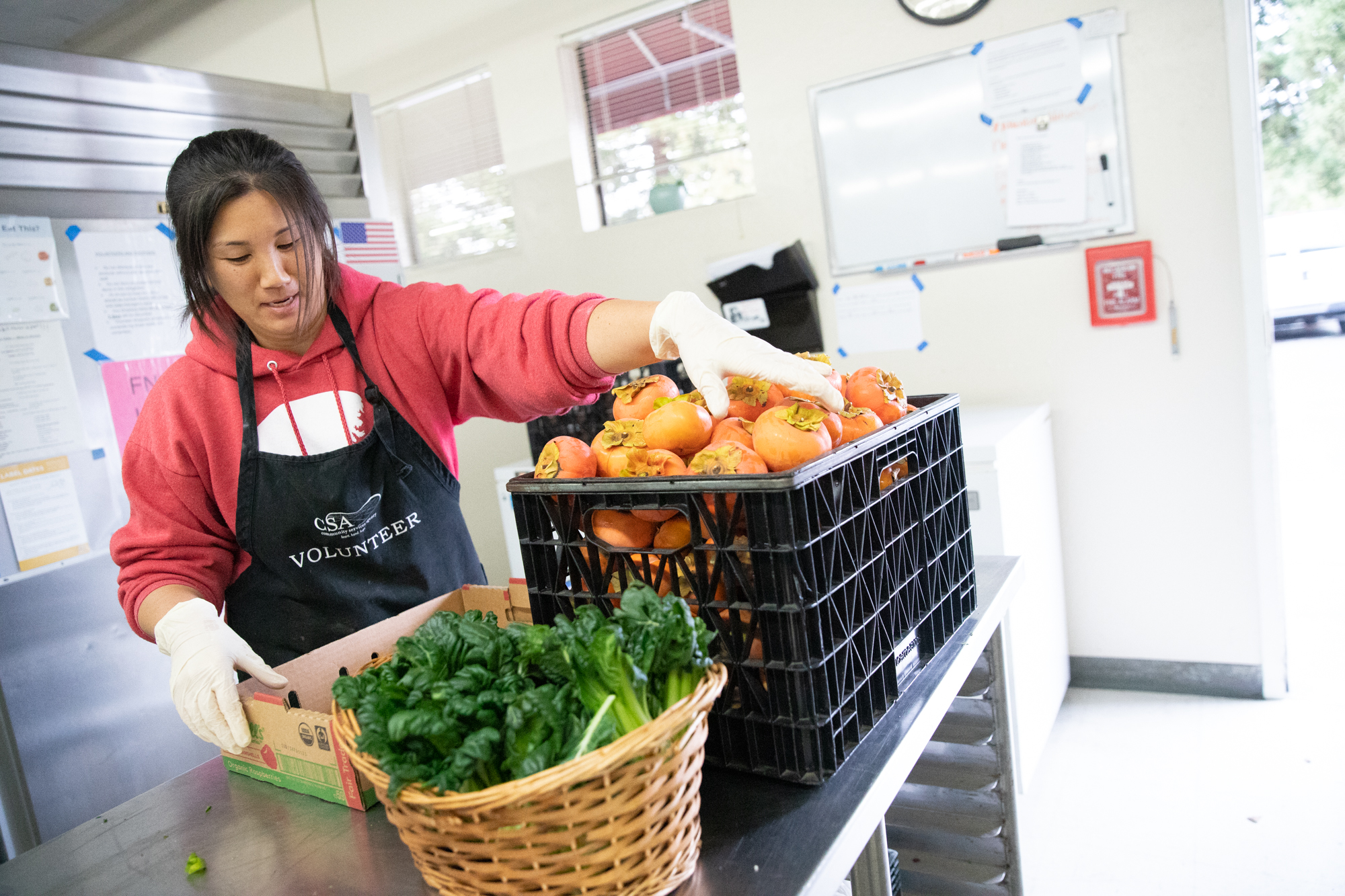 Daphne Ross, a volunteer with CSA, sorts through donated persimmons for the nonprofit's food pantry. CSA is one of seven local agencies that benefit from donations to the Voice's Holiday Fund. Photo by Magali Gauthier.

For several decades, the Community Services Agency (CSA) of Mountain View and Los Altos has been trying to solve a problem that's impossible to ignore.

Homelessness and poverty among several Bay Area counties have worsened in recent years, despite record low unemployment and an economy -- by almost all measures -- that is sailing toward a 10th straight year of growth. Mountain View had an estimated 37 homeless residents in 2011, which has skyrocketed to 606 in 2019.

Income inequality and the rising cost of living are the likely culprits, squeezing families out of their homes and sometimes onto the streets, said Tom Myers, CSA's longtime executive director. The nonprofit has been providing food and shelter to needy residents since the 1950s, but the problem was more invisible and easier to ignore back then, Myers said.

"The community does see the issues that we deal with as priorities now," he said. "Twenty years ago, there were people who just looked the other way or didn't want to deal with CSA and our issues. Now almost everybody understands that there is poverty in our community."

CSA, founded in 1957, has long been a backstop for families who are struggling to pay the bills in Mountain View, Los Altos and Los Altos Hills. About half of its $4.5 million budget goes straight into assistance programs to stave off homeless, including free groceries, rental assistance and even car repairs -- both ongoing and one-time help that can save families on the brink of homelessness.

CSA is also one of seven nonprofit organizations serving Mountain View residents that benefit from the Voice's annual Holiday Fund. Donations to the fund are divided equally among the nonprofits and are administered by the Silicon Valley Community Foundation at no cost, so 100% of contributions go to the recipients.

Myers, who recently celebrated his 20th year leading the nonprofit, said CSA's scope of work has rapidly evolved over the last two decades to meet the rising needs in the community. When he left his job overseeing fundraising and public relations for a local AIDS organization to join CSA in 1999, he said the nonprofit was probably best known as a soup kitchen. It served daily meals to a group of about 30 to 40 low-income and homeless residents, almost all of whom were middle-aged men.

It was around then, he said, that CSA shifted gears and ditched the soup kitchen for pantry services, giving clients access to fresh fruits and vegetables, eggs, meat and other ingredients that empowered them to make their own meals. It exploded in popularity, he said, with a broad cross-section of ages and families with children participating. Currently, that pantry gives out 1.5 tons of food daily and feeds about 3,600 people each year.

CSA used to operate a homeless shelter at local churches on a rotating basis, which Myers concedes wasn't a great service for its clients. The number of people each church could accommodate changed each time it moved -- some supporting only nine or 12 people -- and participants would have to adjust to a new location every month. It was a controversial decision, Myers said, but spending resources on case management and finding permanent housing was better than on tenuous shelter space.

"We were spending all this time and all this energy to put people in this shelter that's just going to close down and rotate in 30 days," Myers said. "The bottom line is you want to get people into housing."

Though CSA's services are geared almost entirely toward helping low-income people, it also runs one of the most successful senior nutrition programs in Santa Clara County. The organization serves up hot lunches five days a week at the Mountain View Senior Center, just shy of 33,000 meals in the 2018-19 fiscal year. Attendees speak highly of the food quality, Myers said, and it gives older adults a chance to socialize and fend off isolation and loneliness.

Each year, about 3,500 people receive help from CSA's homeless prevention services, which encompasses services like one-time financial assistance for rent or utility bills or vouchers for work clothes or transportation. That help extends to car repairs that families can't afford to pay, which has taken on a particular importance in Mountain View in recent months. The city is expected to open three "safe parking" sites for homeless residents who live in cars and RVs, and some of CSA's clients need to repair their four-wheel homes in order to participate.

Rather than cutting a blank check, clients have to provide estimates from three different mechanics and seek out the best deal. But Myers said case managers at the nonprofit guide them through the process. Some car mechanics have been huge supporters of CSA's clients, but he declined to say which ones.

A report released earlier this year found that homelessness in Santa Clara County has increased by 31% over the last two years, rising to 9,706 homeless residents in January 2019. Similar increases were also reported in other Bay Area counties, with homelessness increasing by 30% in San Francisco, 45% in Alameda, and 21% in San Mateo counties.

Though the public focus and media attention has been on homelessness, Myers said it's really just the tip of the iceberg. Only about 10% of CSA's clients are unhoused, and the other 90% are right on the edge of losing their homes. Similarly, residents living in RVs and other oversized vehicles in Mountain View have been a divisive topic for residents, yet they only represent a small fraction of the local homeless population. More than twice as many are living in cars.

"Of the people who come to us for services who are homeless, only 9% live in RVs, while 25% live in cars," he said. "Cars are a much bigger issue and all of that is still less than half of the total number of homeless people."

Some of the most hot-button issues in Mountain View revolve around homelessness and housing affordability, whether it be the density of new residential development, the recently passed ban prohibiting oversized vehicles on city streets or rent control. This leaves CSA's leadership in a tricky spot as an agency, striving to stay neutral while also advocating on behalf of its mission and the clients it serves.

Myers said it's gotten to the point where, for the first time, CSA's board of directors has established a "public policy" committee aimed at striking that careful balance and avoiding politicizing an organization that has enjoyed the support of residents with divergent views on some of the city's most controversial topics.

"Ultimately our job as a nonprofit is to not to be overly political or advocate for one particular way of thinking over another," he said. "The No. 1 thing we have to do as a nonprofit is to make sure our eyes are always on the prize, which is making sure the people in this town have services."

Reflecting on his 20 years with CSA, Myers said he doesn't see himself leaving the organization anytime soon. Despite offers and advice to move on to a larger regional nonprofit, he said he grew up in Mountain View and feels firmly rooted to the welfare of the city's residents. It's always been a bastion of diversity compared to other neighboring cities, and he worries that could erode someday.