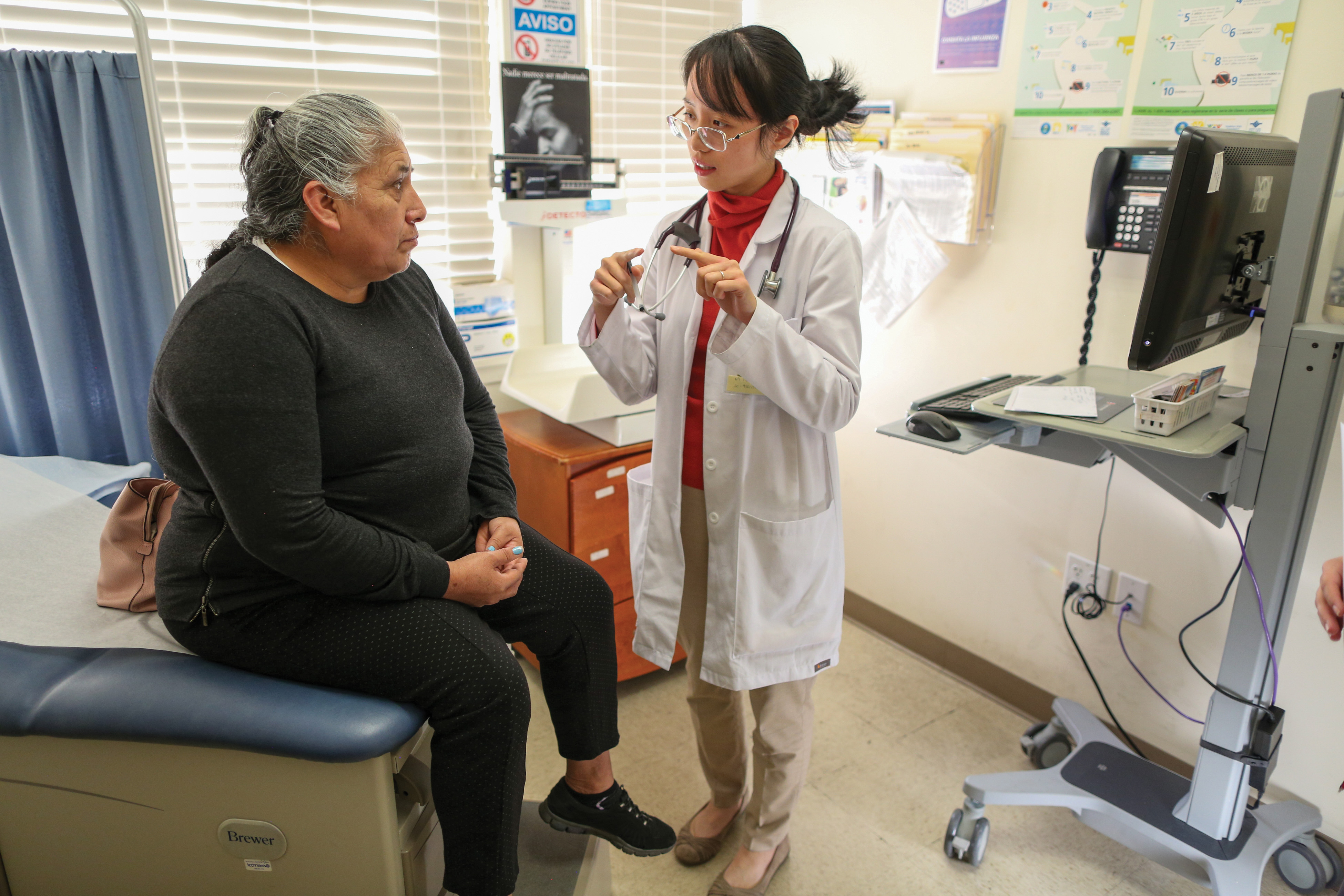 Jessie Peng, a nurse practitioner at MayView Community Health Center in Mountain View, talks to Maria Gonzalez during an exam on Nov. 25. Photo by Sammy Dallal.

Health care can be an afterthought for the thousands of people who lack food, housing or security in Santa Clara County.

The pattern is well known to health officials: those struggling to make ends meet often ignore symptoms like a cough, a lump or a tingly arm until the situation becomes dire. That's what leads many people to end up in the emergency room with medical conditions that could have been easily treated if they were addressed much earlier.

Every day at the MayView clinic in Mountain View, a small health care team is focused on trying to reverse this trend by delivering preventative care before chronic health problems turn critical. This year, MayView has never been so well equipped to pursue its mission, but it also hasn't ever faced such big challenges, said Charlene Gliniecki, a registered nurse who serves as the clinic's human resources director. The small Mountain View clinic, located right above a AAA service center on El Camino Real, has an excellent management team, a devoted medical staff and a stable funding base, she said.

But its mission is also expanding, she said. Over the last year, the number of patient visits jumped by 37%, including large increases in those who are uninsured or underinsured. Of that patient base, more than one out of three lives in Mountain View.

As a matter of duty, MayView never turns away any patients, regardless of their ability to pay, and as a matter of principle, the clinic doesn't go after people for payment. To its core, MayView has a culture that stands in stark contrast to the profit-driven health care market.

"We feel it's important for people to give what they can," Gliniecki insisted. "But we never send collectors after people. We don't chase people down; that's just not what we do."

MayView is one of seven nonprofit organizations serving Mountain View residents that benefit from the Voice's annual Holiday Fund. Donations to the fund are divided equally among the nonprofits and are administered by the Silicon Valley Community Foundation at no cost, so 100 percent of contributions go to the recipients.

Medical practitioners describe MayView in 2019 as rebounding after some years of struggle. A couple of years ago, the clinic was overbooked and overwhelmed. A patient could easily be left waiting about three months for an appointment. The clinic was hemorrhaging staff as many doctors and nurses were being poached by larger hospitals that could pay more. For a period, a smaller MayView clinic in Sunnyvale closed down due to the staffing shortage.

The clinic learned some significant lessons from those lean years. To this day, the clinic still hires scribes to act as executive assistants for physicians, freeing up time for doctors to see more patients. MayView's CEO Ken Graham, the former CEO of El Camino Hospital, came out of retirement last year to help steer the clinic back on track, focusing its limited resources on attaining new certifications, updated records systems and improved staff organization. Morale has improved, grant funding has steadily increased and medical staff turnover has declined.

"It's been a 180 in the way the clinic is run. It's efficient but it still has that family feel of putting patients first," said Alexandra Horevitz, MayView's social worker.

Horevitz is spearheading the clinic's integrated behavioral health program, a new initiative made possible as part of a $1.7 million grant from El Camino Healthcare District earlier this year. Under that program, MayView staffers try to take into account psychological factors like stress, depression or substance abuse as they treat patients' medical conditions.

This presents a unique challenge, Horevitz said. Plenty of patients are living high-stress lives trying to afford to stay in this area. It's common to hear of patients working two or three jobs and living in overcrowded apartments. Often there's no easy remedy, especially when poverty is a factor, she said, but at the very least MayView can provide a place for isolated or depressed patients to unload their emotional baggage.

It is just one effort to meet the unique needs of its patient base. Just down the hallway, Ana Karen Marquez administers the clinic's whole person care program, which tries to take into account each patient's obstacles to getting care, such as transportation, income or psychological factors. In some cases, this involves calling up patients to give reminders to take their medication or attend an appointment. She describes her role as helping patients navigate their own health care.

"It's a missing piece," Marquez explained. "People have so much on their minds, and they're being bounced between so many specialists that they get lost in the process."