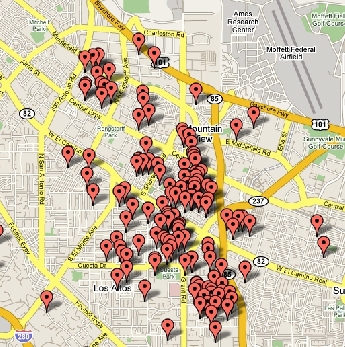 This Google map shows the homes in Mountain View which had solar arrays installed by SolarCity in 2007. Image courtesy Bruce Karney, mvsolar.blogspot.com.

Anyone know if Solar City is still offering that bulk rate group discount? If not, then is anyone interested in forming a group like this? How much does it cost (on average) to install those panels?

They still may be, but your best bet would probably to get a hold of Bruce Karney, who is a MV resident and sales rep for SolarCity.