A Vick dog goes on to share the love 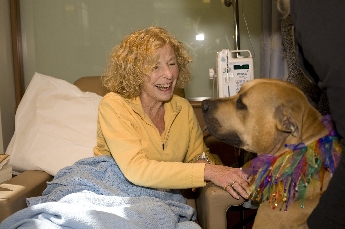 Leo the pit bull cheers up an unidentified cancer patient in this courtesy photo.

Congratulations to the courageous Leo on his new life and selfless contributions to others. And much gratitude to McClay and Our Pack for providing a beautiful legacy for maligned breeds. Too many misinformed people believe that only certain breeds of dogs are agressive. I thank all who work so hard to prove these people wrong. Keep up the good work! And bless all the rescued dogs.

Isn't it just great? If a dog like this can be rehabilitated, one has to wonder why it doesn't work for the human species. I saw another article about the "Vick Dogs" in our local paper in Gardnerville, NV. and would like to hear more about some of the others. Hope we will be hearing more soon.

How is it possible that any dog that has shown aggression to another dog or person becomes a therapy dog? Would someone have to lie on the application???

Report Objectionable Content
Email Town Square Moderator
3 people like this
Posted by Maria Dobbs
a resident of another community
on Feb 19, 2011 at 10:11 am

Reply to Donna:
I want to reply to your comment on how has a previous aggressive dog allowed to become a therapy dog. The poor mistreated pit bull was given a second chance & trained to become a therapy dog. All he needed was a kind human to show him how & to love him. Thank you for posting this wonderful article on such a special dog named Leo! He is bringing joy to a lot of sick patients.

Report Objectionable Content
Email Town Square Moderator
3 people like this
Posted by Huh?
a resident of The Crossings
on Feb 19, 2011 at 10:32 am

Are you talking about the dog or Michael Vic, now returned to professional football and providing mind-numbing therapy to the masses who could care less about his morals?