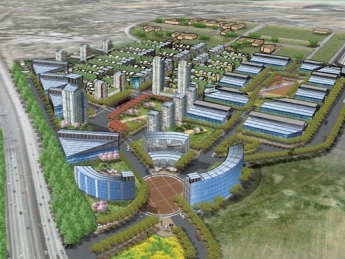 Universities are among the longest-living and most adaptable institutions in the developed world. That's not to say that they're perfect, but they do know a thing or two about real long-term planning. There are at least 100 colleges and universities in the US that are more than 200 years old -- how many medium to large private businesses have that kind of longevity?

Therefore, I hope that when their plans are finished they have much more emphasis on providing housing that's in balance with the number of new jobs and students they will bring to the area. Otherwise, they will have failed to look at what makes communities sustainable, no matter how long-term their view is.

It seems like this will add significant number of people and car trips on the Northern border of Mountain View. The land is owned by the US Government but I think it's considered inside Mountain View. I hope the city gets involved to make sure this development works with the rest of Mountain View.

Report Objectionable Content
Email Town Square Moderator
3 people like this
Posted by eric
a resident of another community
on Jul 8, 2009 at 11:23 am

Dream on, Rodger. This city council hasnt met a traffic nightmare yet that they dont embrace

Report Objectionable Content
Email Town Square Moderator
3 people like this
Posted by Keep things in perspective
a resident of Old Mountain View
on Jul 8, 2009 at 1:33 pm

Let's keep things in a perspective here. What traffic 'nightmares' have you recently been involved in -- in Mountain View? Waiting for 60 or 90 seconds at a traffic light along El Camino? (Check your watch the next time you're at a light that seems long, then be truthful about the result...) A few minutes of stop-and-go along 101 near the 85/101 merge? More than 3 cars waiting at light along Shoreline, Rengstoff or Middlefield?

By comparison to most other major metro areas -- Washington DC, LA, Atlanta, Houston -- traffic congestion in the Mountain View area is miniscule. But the benefits of a project like this one at NASA Ames in terms of job creation, attracting talented students and professionals, etc -- would be substantial. Let's not snuff this project out before it even gets started due to some alarmism about perceived traffic problems.


Report Objectionable Content
Email Town Square Moderator
3 people like this
Posted by eric
a resident of another community
on Jul 8, 2009 at 10:13 pm

how about twenty minutes to go from 101 to Shoreline at Charleston? Cars stopped cold on the slow lane of 101 due solely to Shoreline backup? Virtually permanent idling cars up and down Rengstorff?

Waiting at a light isnt 'traffic'. Waiting through 3-4 cycles to get through a light is.

We dont live in DC, Atlanta, etc. The economies of those cities suffer due to gridlock, as does the quality of life