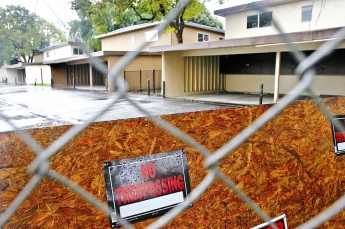 The apartment complex at 291 Evandale Ave., which has stood vacant for almost two years. File photo by Michelle Le.

Mr. Teresi has money to fix the roof but doesn't have money to pay $87,950 planning fees he owes the city?

The council should take a field trip. People are living in the units even now.

Why can I make a comment on an article relating to the Wagon Wheel Neighborhood Association, and yet cannot find WWNA in the pull-down menu of Neighborhoods?

Sounds like Sal has to make another trip to the Home Depot for some new Tarps. Hey Sal, the blue ones are kind of ugly. Could you please put up green ones this time?

Report Objectionable Content
Email Town Square Moderator
3 people like this
Posted by Old Ben
a resident of Shoreline West
on Oct 30, 2009 at 12:57 am

Sal Teresi should be investigated. That property should be seized, it's a public health hazard.


Report Objectionable Content
Email Town Square Moderator
3 people like this
Posted by QM
a resident of North Whisman
on Oct 30, 2009 at 8:58 am

To Mr. Paul Hogan, I bet the city will give you a demolishing permit if you asked for it.

Report Objectionable Content
Email Town Square Moderator
3 people like this
Posted by sb
a resident of Whisman Station
on Nov 1, 2009 at 8:01 am

Sal has money for an attorney and a roof?

Report Objectionable Content
Email Town Square Moderator
3 people like this
Posted by Milo
a resident of North Whisman
on Nov 1, 2009 at 8:02 am

Maybe he plans on using the illegal aliens that used to live there to put the new roof on.