Things to do on the 4th of July 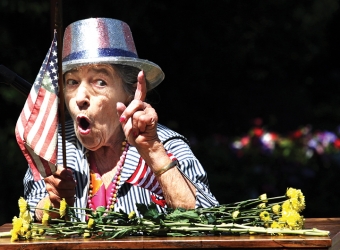 Does anyone know, can you watch the fireworks from Shoreline park?

You can watch from Shoreline Park but there is a large barrier on the golf course around the launch area. Best to bike in, if you drive you will be there for hours after the show.

3 people like this
Posted by Fireworks Enjoyer
a resident of North Whisman
on Jul 1, 2010 at 7:38 pm

You can watch the Shoreline fireworks from Moffet road, on the bridge over route 101. Excellent view.

Hi
The fireworks viewing list above mentions Santa Clara as a place to see them tonight.
According to Santa Clara’s site the fireworks have been canceled there this year.
Due to the City giving all its money to the billionaires that own the 49ers.
Mountain View seems to be about the only place to on the peninsula to see fire works tonight.

Report Objectionable Content
Email Town Square Moderator
3 people like this
Posted by Bela
a resident of Rex Manor
on Jul 4, 2011 at 12:18 pm

The "worst of American pop" symphony show @Shoreline starts at 830, any idea when the fireworks will be on?

Report Objectionable Content
Email Town Square Moderator
3 people like this
Posted by Bela
a resident of Rex Manor
on Jul 4, 2011 at 12:19 pm