None of $100 million in projects are in Mountain View 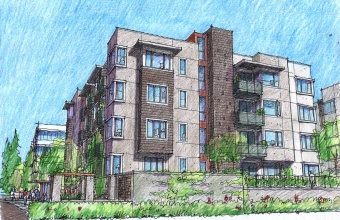 Google helped finance this affordable senior housing project that will be built in Sunnyvale.

Google has invested over $100 million in eight affordable housing projects this year -- all outside of Mountain View -- including $19 million for a 124-unit senior housing complex in Sunnyvale where a groundbreaking is scheduled this week.

Google has chosen to invest through a bank-administered tax credit program in which banks select affordable housing projects to fund. So far none of the projects have been in Google's hometown of Mountain View, despite persistent calls from local housing advocates for more affordable housing.

"It's not like we're running around cherry picking communities at our liking here," a Google spokesperson said.

U.S. Bank announced on Monday that it is investing $86 million from Google in 480 affordable housing units in Milwaukee, Wis. and Apple Valley, Minn., among four other Midwestern communities.

Google is also investing $6 million in a project in Inglewood, Calif. where 104 units of existing senior housing will be rehabilitated and senior social activities added. Google partnered with Union Bank for both the Sunnyvale and Inglewood projects.

In Sunnyvale the $37.6 million Mid Peninsula Housing project at 660 South Fair Oaks Avenue will be home to low- and very low-income seniors with rents ranging from $498 to $1,193 for one- and two-bedroom units. A groundbreaking is scheduled for Tuesday morning, Aug. 31.

A Google vice president commented in a press release on the Sunnyvale project.

"Google recognizes the challenges associated with developing affordable housing in California and is proud to help meet this need by providing financing for some of the region's developers," said Brent Callinicos, vice president and treasurer of Google.

Singapore's oldest cafe was about to open in Palo Alto. Then, the coronavirus hit.
By Elena Kadvany | 2 comments | 5,479 views

A Pragmatic Approach to A Trillion Trees
By Sherry Listgarten | 4 comments | 4,187 views

Repairing a Disagreement with your Beloved & “Physical” vs. “Social” Distancing
By Chandrama Anderson | 2 comments | 2,875 views