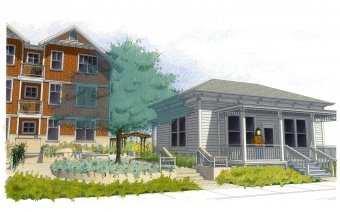 The historic Bakotich house on Calderon Avenue would be preserved in this revised plan for a co-housing project for seniors.

I think the author is confused between Co-housing and Senior Housing. Based on the Co-housing group's website, this seems to be a Co-housing community that happens to only have seniors committed to living there so far, and not a "senior condo project" at all.

Fantastic news. Kudos to the Mountain View Co-Housing community for working to preserve this unique home(...and thanks to the Bakotich family for keeping it standing for a good part of its 130 years!). There are only a handful of structures in the area from the 19th century, so it's very exciting to learn this piece Mountain View architectural heritage will be restored and moved to a spot on Calderon Avenue where we all can enjoy the glimpse of history it provides and appreciate the new owner's investment in its future. I hope the project moves smoothly through the approval process!

Chiming in as living proof that this is not an "all senior" community; my husband and I plan to move into this wonderful project and we are 53 and 56. Living in community is a great way to live at any age.

This is a wonderful project that has been extremely well thought out. It will be a perfect fit in it's surroundings and great addition to old Mountain View. I encourage all the residents in the area to support the Burwen's and all the other investors in the co-housing community.

Report Objectionable Content
Email Town Square Moderator
3 people like this
Posted by Anyana
a resident of Old Mountain View
on Nov 12, 2010 at 7:15 am

Report Objectionable Content
Email Town Square Moderator
3 people like this
Posted by Hardin
a resident of Cuesta Park
on Nov 13, 2010 at 10:16 am

Kudos to the developers for taking the time and energy to re-purpose the historic Bakotich house for the new development. Not only does it retain the sense and style of Mountain View past, its refreshing to hear a developer use words like "a sense of entrance". When developers build with design and architecture in mind, to make spaces living spaces, and not just boxes, everyone benefits.