Housing groups get a break in restoring old homes 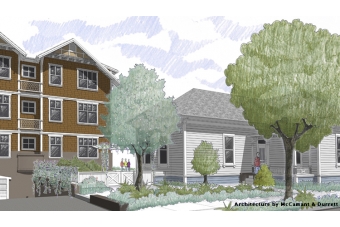 To make way for a three story condo building, the Mountain View Co-housing community proposes to move the 1880s farm house at 445 Calderon out from the middle of the property and rotate it 90 degrees so the porch faces the street. With an 11-foot addition removed from the rear, the house would be used as living quarters for a care-giver to the community's residents, while a 300 square foot portion would be a library and meeting space for community groups. Image courtesy of the Mountain View Co-housing Community.

With a few changes to city codes, the City Council is encouraging historic preservation and potentially saving the 19 households of the city's first co-housing project as much as $664,000 in fees.

The City Council unanimously decided to amend its historic building ordinance at its Jan. 24 meeting, giving a boost to Habitat for Humanity and the Mountain View Co-housing Community in their efforts to restore historic homes at 300 Chiquita Ave, and 445 Calderon Ave., respectively. The co-housing group may get a break in fees, while Habitat may be allowed to convert a large old-home-turned-apartment building back into ownership housing.

The move could be a big relief to the co-housing group, as it had been hit with the unexpected cost of restoring the 1880s Bakotich farm house on the property -- on top of the expense of constructing a condo building above an underground parking garage with an elevator.

David and Susan Burwen have been leading the group of people who want to live in a co-housing community of their own making.

"We have 13 households that are signed up and have put in a substantial investment," David Burwen said. "A number of these people would not be able to afford these units" without a break from the city.

Because the 19-unit project includes the historic home, the changes to the city's historic building ordinance allows city officials to give Mountain View co-housing a break on half of the park fees a developer would otherwise pay, saving the group as much as $114,000. It is possible that another $550,000 in below-market-rate (BMR) housing fees could be saved by allowing the group to count the Bakotich house as a BMR unit for a care-giver who could serve the community's older residents.

But while the co-housing project was approved by the City Council, the breaks in fees are not promised -- the city's zoning administrator has yet to determine how much in savings the co-housing group will receive.

The Burwens noted that the Bakotich house would also be an asset to the neighborhood once it is moved out onto the street frontage (it's currently hidden by trees) and partially converted into a 300-square-foot library and meeting space that would be available to community groups.

"We are excited Mountain View is going to have the finest co-housing community in the South Bay," said Burwen and his wife Susan. "A collaboration between an owner and the city to preserve these historic houses is a great step forward."

While the co-housing group mostly consists of retirees, the Burwens say the group is open to all ages as it seeks its six final members. More information can be found at mountainviewcohousing.org.

Using its model of having people in need help to build their own affordable homes, Habitat for Humanity proposes to restore a "historic residence" at 300 Chiquita Avenue, which is now divided into six apartments. Habitat proposes to turn it into a pair of condos, which requires that the City Council modify building codes to allow a "condo conversion" of a building with fewer than six units. A set of smaller homes that sit on the same lot would make way for another six new ownership homes under the proposal.

A volunteer who has helped build and restore dozens of Habitat homes, Richard Trevisan recalled Habitat's restoration of a home on 8th Street in San Jose. "Neighbors saw a beautiful addition to the neighborhood," the restoration of a Victorian home at least 125 years old that had been displaced by the construction of San Jose's new City Hall, he said.

"Habitat helps a family with a hand up, not a hand-out," Trevisan said. "We hear over and over again that children of Habitat families have especially benefited, because without having had that home they would not have been able to send their children to college."

Sounds like a bunch of swingers are looking for a break from the city while the rest of us have to wait in line and pay our fees.

So you are suggesting that this is just a shell game then? The council just changes city codes to help this sweetheart project and deal along? Yeah, right. This is more about saving each investor $35,000. The farmhouse was supposedly part of the original plan. Cost were supposedly factored in. So now who will own the farmhouse?

Susan - don't worry about the naysayers and conspiracy theorists lurking around these message boards. It's great that the Habitat and Co-Housing projects came along to finally push the City into offering developers some real incentives towards historic preservation. Mountain View is fortunate to have private property owners willing to spend the extra time and money to preserve our historic landmarks. Offering some exemptions from park and affordable housing fees seems like a very fair trade for the public benefit provided by preservation of City landmarks. These structures are irreplaceable and add so much to the character of Old Mountain View. Thank you for working to restore one of them!

Report Objectionable Content
Email Town Square Moderator
3 people like this
Posted by Observer
a resident of Old Mountain View
on Feb 8, 2012 at 6:25 pm

Report Objectionable Content
Email Town Square Moderator
3 people like this
Posted by Le Dude
a resident of Gemello
on Feb 9, 2012 at 1:08 pm

A bunch of crazy old white people (formerly hippies) at it again.

Report Objectionable Content
Email Town Square Moderator
3 people like this
Posted by Carol
a resident of Old Mountain View
on Feb 18, 2012 at 9:58 am

this makes me livid! So MY tax dollars are going to line the pockets of those fortunate enough to already have their sweet nest egg already in place? They have many housing options.

This is an outrageous use of public money. We should be helping the have-nots and not the haves!

These local restaurants are donating meals to Bay Area residents in need. Here's how to help.
By Elena Kadvany | 6 comments | 10,649 views

Coronavirus: Plan ahead now for a big outbreak
By Diana Diamond | 16 comments | 3,717 views

Will the Coronavirus Save Lives?
By Sherry Listgarten | 27 comments | 3,586 views

The first few seconds after awakening; before I remember the virus
By Chandrama Anderson | 0 comments | 621 views