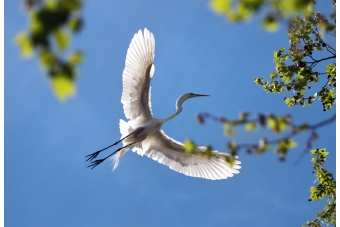 An egret flies on April 16 to an egret colony in trees that grow along Shorebird Way near a site where Google has proposed an auto bridge across Stevens Creek. Photo by Michelle Le

I am very pleased about the changes to the original plan, as the marsh is home to many shorebirds and the additional bridge would have compromised the habitat. As the plan goes forward, comprehensive environmental review processes are needed for the remaining proposed Charleston bridges regarding potential impacts on the creek and wildlife.

Google possibly thought that the two bridge proposal could retreat gracefully into the single bridge and roll forward. But they may not have realized that almost nothing can be built in California now without years of studies never sufficient, years of head-patting never sufficient, then followed by years of law suits never sufficient. Private money is out of infrastructure because it cannot operate with the years of uncertainty. The now unlikelihood of any bridge may throw the whole project into limbo with endless wrangling over traffic.

In spite of the stellar accomplishments of environmentalism in past years in California, now it's become another form of Conservatism. That is, we will now be left less safe, more polluted, less efficient, more gridlocked, and poorer from the efforts. And the poorer we all are, the poorer the nature we are part of will be too and the more pressure it will be under.

There can be no mistake - stewardship and restoration cost money and must have acceptance from the community. It's only 4 years from the 2008/9 Crash and that has already been forgotten.

Come to think of it, if Google backs out, then perhaps it would be time to think about Moffet's use as a commercial airfield again.

Flying: How much is enough? It's personal.
By Sherry Listgarten | 8 comments | 1,992 views